A masterpiece featuring three paintings by Francis Bacon is expected to fetch £46million at auction.

Triptych Inspired By The Oresteia Of Aeschylus was unveiled in London yesterday as the centrepiece of a Sotheby’s sale in New York in May.

It was painted in 1981 by Dublin-born Bacon, who was known for his emotionally charged raw imagery.

The work portrays his tumultuous relationship with his parents. 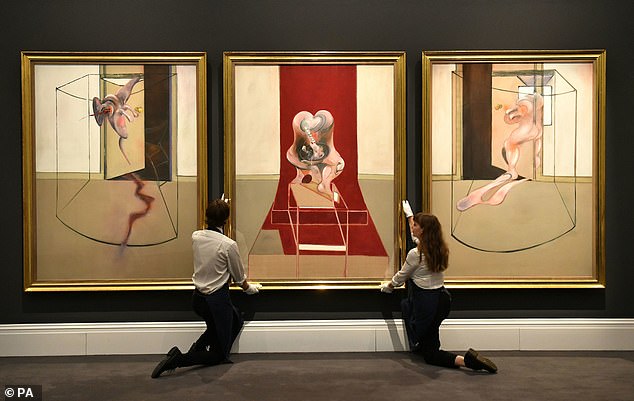 Pictured: Triptych Inspired by the Oresteia of Aeschylus by Francis Bacon during a press preview at Sotheby’s, ahead of the artwork being auctioned where it is anticipated to fetch in excess of £46million at the Sotheby’s Contemporary Art Sale in New York this May

The panels are over 6ft high.

Greek playwright Aeschylus’s trilogy, The Oresteia, includes the story of Orestes, who kills his mother in revenge for the murder of his father. The triptych is being sold by the foundation of Norwegian billionaire Hans Rasmus Astrup.

Bacon died in 1992 at the age of 82. Alex Branczik, of Sotheby’s, said the work ‘confirms Bacon’s standing in the pantheon of modern masters’.