Paris: Eating habits are as good a guide to France as any, and they are about to undergo a radical change.

The Labor Ministry says it will allow French employees to eat lunch at their desks in order to contain the spread of the coronavirus, a practice previously forbidden under Article R.4428-19 of the 3,324-page French labor code, or Code du Travail. 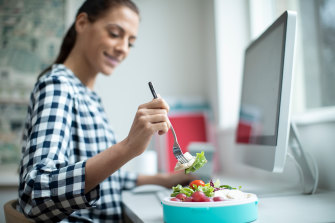 In France, eating at your work desk has been against the law but that is about to change due to COVID. Credit:iStock

French eating habits have already been sorely tested by the pandemic. A 6pm curfew prevents the predinner stop at the boulangerie or the butcher, and the closure of all cafes and restaurants has propelled takeout in the form of “le click & collect”— an English expression the French have adopted. It has been a case of one indignity after another.

A spokesperson for the Labor Ministry said a decree opening the way for another sharp lifestyle adjustment would be made public in the next few days with a view to limiting employees’ exposure to COVID-19. Companies have up to now been barred from “allowing workers to have their meals in places dedicated to work”.

The leading economic newspaper, Les Echos, ran its article about the development under the shocking image of a woman eating a salad of lettuce and tomato from a plastic container in front of her laptop. A faint smile on her face suggested she might even be happy.

The woman at her desk pictured in the conservative daily Le Figaro looked far less content, with a phone in one hand, a fork in the other and her eyes on a screen.

Until now, any company allowing employees to eat lunch at their desks was subject to a fine if discovered by the inspectors who enforce the labor code. The employee in question faced unspecified disciplinary action.

The ban was consistent with the hyperregulation of workers’ rights enshrined in a labor code that took form in the 20th century on the rough premise that every owner of a business was a ruthless capitalist bent on exploiting workers — say, by making them work through their lunch hours.

It also reflected the fierce French attachment to the country’s “art de vivre,” incompatible with the heresy of eating a lamb cutlet with sautéed potatoes while gazing at a spreadsheet.

“We French and you Americans have totally different ideas about work,” said Agnès Dutin, a retired translator, as she wheeled a bag with her Sunday market produce. “It’s a catastrophe to eat at your desk. You need a pause to refresh the mind. It’s good to move your body. When you return, you see things differently.”

To eat in France, whatever the inroads of fast food, remains a social experience rather than a matter of mere nourishment. It is a pleasurable gathering to which much of life is dedicated.

In the country that gave the world the 35-hour week, albeit often circumvented, the American lunch-at-the-desk habit is viewed as an ominous indication of a poor understanding of the proper work-life balance.

“You only have one life,” Dutin remarked.

The pandemic restrictions have been particularly difficult for owners of restaurants. Some had suggested opening in defiance of the government’s order, prompting the French economy minister, Bruno Le Maire, to warn that such an insurrection would lead to the loss of government financial support during the pandemic.

Overhauling the labor code to make hiring and firing more flexible in France, and generally cut back on regulation, has been a major plank of Emmanuel Macron’s presidency. The change has contributed to a significant drop in unemployment, which had been running around 10 per cent before he took office.

Macron has opted not to impose a third lockdown despite the continued virulence of the pandemic, but his government has reinforced measures to contain the virus in the workplace – by insisting that companies favour remote work wherever possible, keep employees at least 2 metres apart if they come to the office, and now by allowing workers to eat at their desks.

It’s unclear how many French people were already doing so. Globalisation, or just plain Americanisation, has hit France, too. Still, the Labor Ministry decision was a departure.

“French culture is a culture of the table,” said Paulo Santos, who moved to France from Portugal eight years ago. “You gather around it and you talk about everything and nothing. That’s important.”

A popular satirical video doing the rounds shows a group of tourists visiting a French “Museum of the Restaurant” and gaping in wonder at the guide as she explains that before COVID-19 people helped themselves to peanuts at the bar — from the same bowl—and sat opposite one another at dinner. The tourists, speaking in bad French, shake their heads in stupefaction.

In a country of old habits, it is a time of troubling change. Dutin said she felt the response to the pandemic in France has been overdone and erratic. Her mother died of COVID-19 last year at 88. Looking through her papers, Dutin found her notes from school in the 1940s, describing instruction from teachers in how to combat tuberculosis — never drink from the same glass as someone else, for example.

“That was a more serious disease at a time when science was far less advanced,” she said. “Now fear is everywhere. You are born to die. One day or another, of one thing or another. We are living an aberration.”