Former cabinet minister Marlene Kairouz has taken legal action against 26 high-ranking Labor MPs and executives, including Labor leader Anthony Albanese over claims she is being unlawfully pursued by the party.

Almost all of Labor’s national executive and interim administrators Steve Bracks and Jenny Macklin are expected to be served legal documents within the coming days. 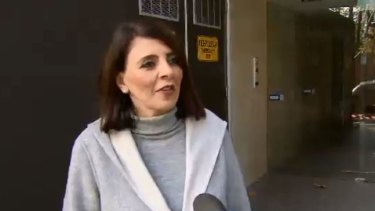 A source close to Ms Kairouz, who spoke on condition of anonymity, said former Victorian state secretaries Noah Carroll and Sam Rae could also be called as witnesses before any hearing. Both were factional organisers within the party before their appointments.

ALP national secretary Paul Erickson said he was unable to speak on any matters regarding the Victorian intervention. Mr Bracks, a former Victorian Premier, said he was unaware of the action.

Ms Kairouz emailed her caucus colleagues on Tuesday afternoon regarding the action.

A party ally who has been supporting Ms Kairouz said it was with a “heavy heart” that she had taken legal action.

Several members of the national executive told The Age they had not received any formal legal correspondence but had told to “expect it” in the coming days.

One member, who also declined to be named, said the national executive – the top decision-making body of the federal branch of the party – played no role in any disciplinary matters relating to Ms Kairouz.

A spokesman for Mr Albanese, who is travelling in northern Queensland, said it was a matter for the Victorian division.

In legal documents seen by The Age, dated February 8, Ms Kairouz claims the appointment of Mr Bracks and former minister Jenny Macklin as administrators was “null and void”.

Last week, the Victorian Labor Party charged Ms Kairouz under Labor’s internal rules with a string of branch-stacking offences and revoked the memberships of 1800 people.

Ms Kairouz defended herself in a statement she posted to Twitter last Monday, saying the charges did not directly link her to branch stacking and claimed it was something she had never engaged in.

The Kororoit MP will be referred to the party’s internal disputes tribunal and, if found guilty, will be kicked out of the ALP.

Mr Bracks and Ms Macklin, whose six-month term ended in January, did not identify who they had charged, or the specific charges, but said they had referred “two of what we believe to be most serious cases to the party’s internal disputes tribunal for alleged breach of branch-stacking rules”.