After losing a cousin to melanoma and being diagnosed with stage three of the same cancer, Sandra Moore feels lucky to be alive three years after receiving a potentially breakthrough treatment.

A new study published on Tuesday in the peer-reviewed medical journal Nature Medicine has shown that a short course of immunotherapy drug treatment before surgery is effective in preventing the deadly spread of the disease in melanoma patients who are at high risk of the cancer recurring.

Within three weeks of being told the melanoma had spread through her lymphatic systems, Ms Moore, 55, had two infusions of a combined drug followed by surgery to remove her lymph nodes and experienced no side effects other than a mild skin rash. 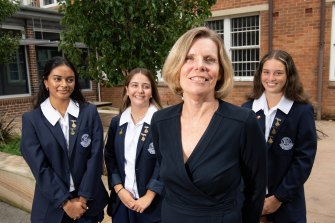 High school teacher Sandra Moore has been well since being treated with a breakthrough melanoma treatment three years ago. With her are Burwood Girls High School students (l-r) Arisha Sahay, Lili Franco and Alyssa Broughton.Credit:Nick Moir

Instead of receiving the more standard approach which involved surgery before the treatment, the high school teacher from Balmain in Sydney’s inner west took part in a trial which involved having the drug therapy before surgery.

“It literally saved my life. To live and be this well with no treatment more than three years after diagnosis is incredible,” she said. “I feel so lucky.

“I’m back at work full-time teaching. I’ve had no adverse effects. I’m super well and no one would know that I had cancer.”

Ms Moore, whose 37-year-old cousin died of melanoma in 2009, said she has not missed a day’s work at Burwood Girls High School due to illness since completing her treatment in October 2017.

The study suggests immunotherapy may work more effectively in patients with stage three melanoma when given before, rather than after surgery, because the bulky tumour can provoke an immune response. It found three quarters of patients in the trial responded well to dual immunotherapy given before surgery and only three per cent saw their tumours return after, suggesting 97 per cent could likely be cured.

The study’s senior author, Georgina Long, who is co-medical director at the Melanoma Institute Australia, said the treatment had flipped the “surgery then drugs rationale on its head”. 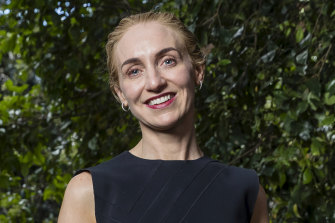 Professor Long said the neoadjuvant approach [drug therapy delivered before surgery] is a new way of dealing with melanoma and is a “game changer for stage three patients with bulky disease which has spread to their lymph nodes”.

“By utilising our arsenal of groundbreaking new treatments before surgical removal of the tumours, this approach is proving effective in stopping melanoma in its tracks and preventing its recurrence and spread to distant organs,” she said.

Professor Long said the therapy had also helped doctors make an early assessment on how well a patient was responding.

“Immunotherapy has dramatically improved outcomes for melanoma over the past few years and it seems further improvements are possible,” she said.

“We anticipate that this will ultimately change following the very promising clinical trial results,” he said.

Australia has the highest melanoma rates in the world with one person diagnosed every 30 minutes and the Melanoma Institute Australia estimates 1300 people will die from the disease this year.