Moscow: A former director of Open Russia, an opposition group linked to exiled former oil tycoon and Kremlin critic Mikhail Khodorkovsky, has been removed from a plane in St Petersburg and arrested, a monitoring group reported on Tuesday.

OVD-Info, a group which monitors police action against opposition figures, said Andrei Pivovarov was arrested at Pulkovo airport and was being transferred to the Investigative Committee. 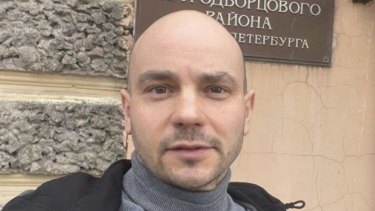 Andrei Pivovarov, the head of OVD-Info, a group which monitors police action against opposition figures, was arrested at Pulkovo airport.Credit:Facebook

Open Russia said on Thursday it had decided to end its operations in Russia to protect its members from the risk of being jailed.

Russia declared the London-based group “undesirable” in 2017, effectively banning its activities. Its allies in Russia continued their activism under the same name, but as a separate legal entity to try to protect themselves from prosecution.

Pivovarov’s removal from a plane comes less than two weeks after the Belarusian government forced down a Ryanair jet in order to apprehend Belarusian blogger Raman Pratasevich who was passing through the nation’s airspace on a flight from Athens to Lithuania.

The Belarusian president sent a fighter jet to escort the Ryanair plane that had been diverted by a false bomb alert, allowing authorities to detain the opposition-minded blogger on board, drawing international condemnation from Europe and the United States.