Tanya Lynch came back to her Traralgon home on Friday to find the floors covered in an inch of brown sludge and debris.

“It was devastating,” she said, looking at the watermark 30 centimetres high on the walls. “I didn’t expect the mud.” 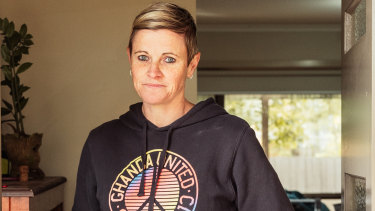 Tanya Lynch, who evacuated her home from floods in Traralgon.Credit:Blake Bourne

When her partner and three children left on Thursday morning, the water from the Traralgon Creek had already inundated the house.

On Friday afternoon, residents near the swollen Traralgon Creek were on edge again as they braced for another flood with evacuation notices issued for the area.

Her family had just minutes to raise whatever they could from the floor while water gushed in on Thursday morning. 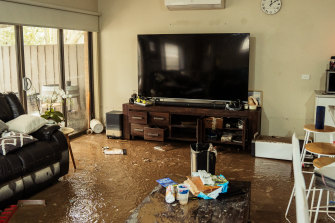 Ms Lynch and her family, together with their pet python and chihuahua, had to be rescued by search and rescue police in a boat that pulled into their front yard.

In the streets on Friday, dazed residents spoke with their neighbours discussing whether to stay or leave.

As news of the evacuation order filtered through, one woman said she was not sure what to do.

“At this point with the stress of getting out and everything I feel like I could just stay,” she said. “I could be sorry later.”

Scott Lever, who also lives near the creek, said he was confident the flood waters would not intrude into his house.

“I’ll hang around just to make sure the furniture is safe,” he said. “It would have to be really catastrophic if it was endangering here.”

Mr Lever’s house avoided flooding on Thursday even though the water rose up to the bonnet of his car, which was sitting in the front yard.

He said many of his neighbours felt tense after the flood waters swept through the streets this week.

“I think most people will take off.” 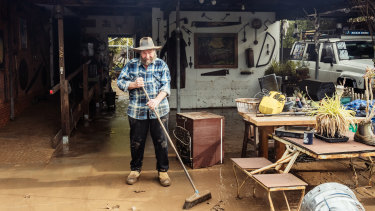 Les Davidson sweeps water in the front yard of his Traralgon home after the recent flooding in the Latrobe Valley.Credit:Blake Bourne

Nearby, Les Davidson has lost most of his possessions to the flood waters, including guitars, accordions and boxes of documents.

The floors of his house were also flooded when a semi-trailer drove past on Thursday morning, sending waves of brown water through the door.

Mr Davidson had tried to flag down the truck driver to rescue him from the rising water. 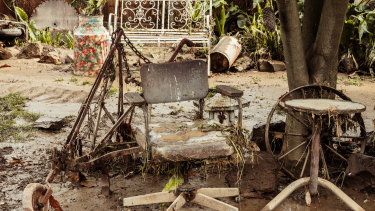 Storm damage to the back yard of Les Davidson’s Traralgon home after the recent flooding in the Latrobe Valley.Credit:Blake Bourne

“He just looked at me,” Mr Davidson said. “I wanted to get out of here. I was panicking.”

Eventually, a fire truck rescued him and Mr Davidson received treatment from paramedics. 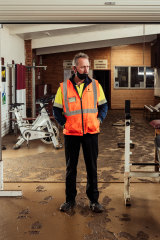 At the nearby football ground, the water poured into the clubrooms, picking up freezers and leaving them leaning against the wall.

He hoped the football team could play its next scheduled match in two weeks’ time but conceded that might be optimistic.

But the club faces a massive clean-up effort. Mud has seeped into the carpets throughout the clubrooms and squelches underfoot.

Mr Foley watched a live security camera stream on Thursday as the water engulfed the field. It rose above the boundary fence and into the stands. 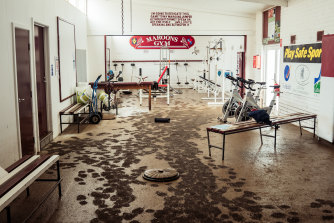 A general view of  storm damage to the Traralgon Football Netball clubrooms after the recent storms and flooding.Credit:Blake Bourne

On Friday afternoon, others like Mr Foley were preparing for their homes and clubs to be inundated or cut off by flood water for a second time, with fresh evacuation warnings issued.

Further east, at-risk residents in Sale were being doorknocked and the caravan park relocated as emergency services forecast they would be next to be evacuated.

Incident controller Keith O’Brien said those who lived, worked or were holidaying in the Traralgon Creek area should evacuate before nightfall, with major flooding possible overnight and into Saturday morning.

While Traralgon Creek was below the minor flood level on Friday afternoon, renewed rapid river level rises were expected later into night. 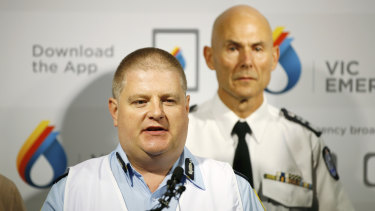 And major flooding, Mr O’Brien said, was possible from early Saturday morning. A relief centre has been opened at the Traralgon Basketball Stadium on Garibaldi Street.

“Regardless of COVID restrictions, if you do find yourself presented with an emergency warning or asked to evacuate you can absolutely leave your home to move to a safer location,” Mr Wiebusch said.

Between Wednesday and Friday, emergency services received more than 7400 requests for assistance. More than 86,000 homes remained without power on Friday night.