England’s silent skies: Airspace empties as lockdown decimates air-traffic and number of planes dwindles to a handful of cargo flights – compared to a year ago when it was bustling with aircraft

The skies over London looked empty last night as only a handful of planes took off and landed at the city’s major airports amid the nationwide coronavirus lockdown.

The most recent flights, recorded at 8.48pm, were largely cargo planes from the likes of UPS and FedEx, with only a scattering of passenger planes seen landing at Heathrow, Gatwick and Stansted airports.

Other flights appear to be on the ground at the typically busy airports, with clusters seen at Heathrow and Gatwick. 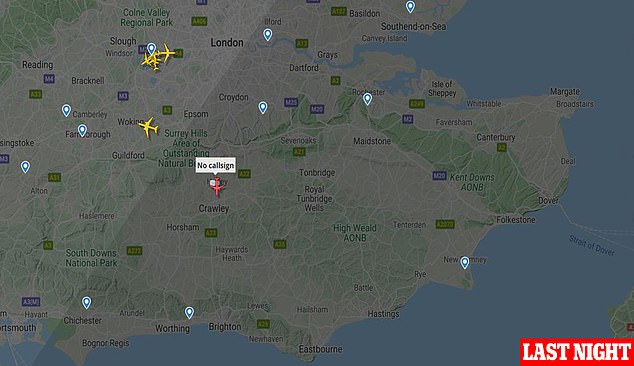 The number of flights arriving and departing in the same airspace a year ago appeared to be more than double the amount recorded by Flight Radar last night.

London Heathrow, which handles more than 475,624 flight movements annually, has reported a 75 per cent reduction in the number of passenger flights operating from the airport.

It also saw a 409 per cent increase in cargo-only air traffic compared to the average number seen before the pandemic.

More than 40 per cent of the UK’s pharmaceutical products such as medicines, vaccines and respirators, are imported through the airport, which is the UK’s busiest. 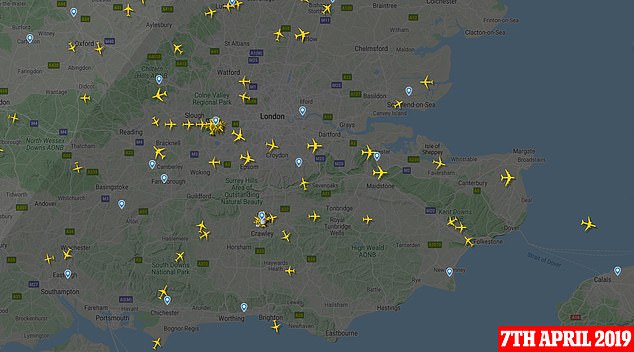 Heathrow closed one of its runways on Monday as air traffic continued to fall amid the coronavirus crisis, which has killed 6,159 people amid 55,000 cases in the UK.

The airport has two runways and will alternate which one they keep open on a weekly basis, a spokesman said.

The airport added: ‘Although we are seeing significantly fewer flights at the moment, Heathrow will remain open so that we can continue to play a crucial role in helping to secure vital medical goods and food for the nation during this unprecedented epidemic.’

Heathrow has also closed Terminal 3 and Terminal 4, which are normally home to Oneworld and the SkyTeam alliance, with Virgin Atlantic and Emirates also operating from Terminal 3. 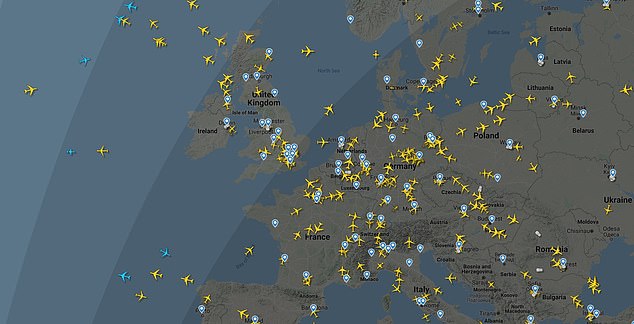 Pictured: Flights seen over Europe at around 9pm last night as recorded by Flight Radar 24

Terminals 2 and 5 will remain open as the airport continues to operate a reduced service.

Gatwick Airport, near Crawley in West Sussex, has also closed its North Terminal with all flights now operating out of its South Terminal.

Airlines including easyJet and Ryanair have moved to ground their entire fleet in recent weeks, while bigger carriers such as BA and Virgin Atlantic have cut schedules by up to 90 per cent.

It comes after British Airways struck a deal with its unions to suspend more than 30,000 cabin crew and ground staff in one of the airline industry’s most dramatic moves yet to survive the coronavirus pandemic. 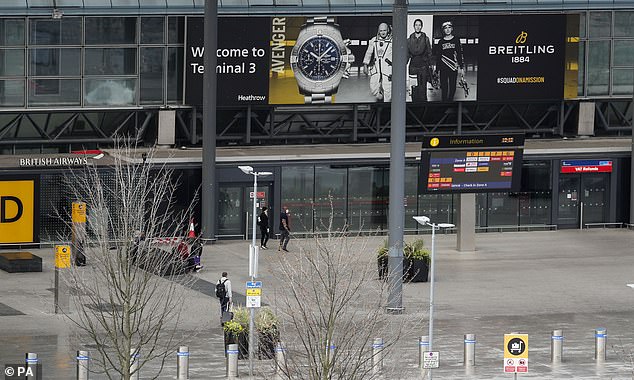 The empty forecourt outside Terminal 3 at Heathrow Airport, which now has only one operational runway 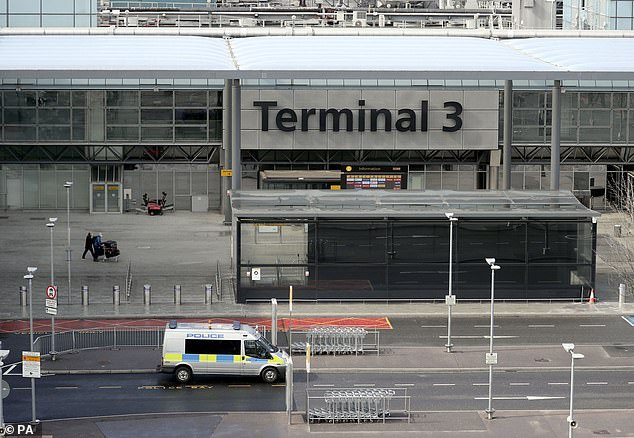 Heathrow closed one of its runways on Monday as air traffic continued to fall amid the coronavirus crisis, which has killed 6,159 people amid 55,000 cases in the UK (Pictured: Terminal 3 on Monday) 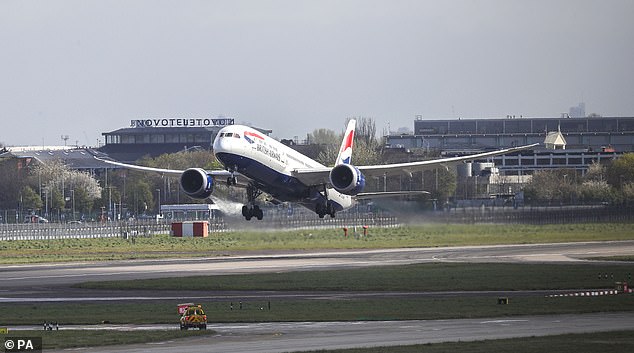 With global travel in turmoil as the virus takes hold around the world, BA’s owner, IAG, said it would also cut capacity by 90 per cent in April and May, and scrap its dividend in a desperate bid to survive the worst crisis in its history.

With BA having already agreed a 50 per cent pay cut for its pilots, the deal focuses on cabin and ground crew, engineers and office staff.

Union chiefs have also announced that BA will furlough a large majority of its workforce on 80 per cent pay.

The airline will introduce its own modified version of the government’s job retention scheme, according to the Unite union.

Unlike the government scheme, there will be no cap on earnings, union chiefs said.

Workers will be able to divert their pension contributions into their pay for a short period of time and there will be no unpaid temporary lay offs or redundancies, said Unite, adding that a redundancy process that had already begun has been halted.