Elon Musk has announced his $44billion acquisition of Twitter is temporarily on hold pending details about the number of spam and bot accounts on the social media platform.

The company said earlier this month that false or spam accounts represented fewer than 5 per cent of its 229million users during the first quarter.

But Musk is now pausing his mammoth takeover demanding further information about the figures.

Shares of the social media company fell 25 per cent in premarket trading this morning, continuing a massive downward trend since his takeover bid was announced on April 25. 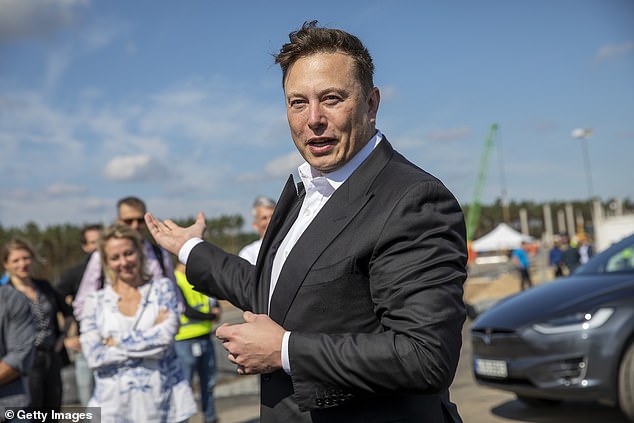 He linked a Reuters report from May 2 stating Twitter’s calculation that bots were only a small percentage of the site’s users.

It is not clear what the legal effect of his notice was.

Prices have been plummeting ever since Musk’s buyout deal was agreed by the tech behemoth.

The deal to announce the Tesla CEO was taking the company private was announced on April 25, when stocks closed at $51.70.

Ever since, prices have been falling lower and lower to their latest close on Thursday at $45.08. 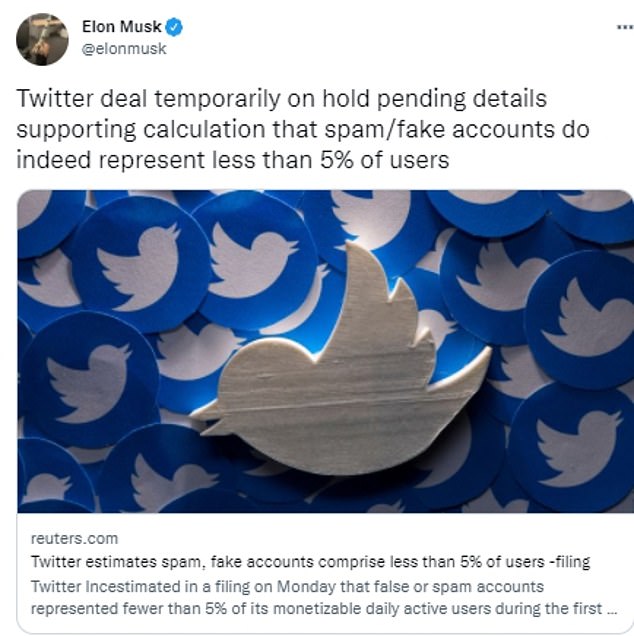 Twitter had said it faced several risks until the deal with Musk is closed, including whether advertisers would continue to spend on Twitter.

Musk had said that one of his priorities would be to remove ‘spam bots’ from the platform.

The announcement is another twist amid signs of internal turmoil over his planned buyout of Twitter, including that the social media company fired two of its top managers Thursday.

Yesterday, it was revealed the Tesla CEO’s purchase was being investigated by US regulators after he delayed reporting the buy – and thus failed to provide sufficient warning that a takeover bid was looming.

The 50-year-old’s first move towards buying Twitter was his purchase of a 9.2 percent stake in the tech company in mid February.

But he did not disclose his purchase to the Securities and Exchange Commission (SEC) until at least 10 days later, on April 4.

Any investor who crosses a 5 percent stake must file a form with the SEC within 10 days. It serves as an early sign to stakeholders that a big investor could seek to control the company.

Musk’s April 4 filing also characterized his stake as passive, meaning he did not plan to take over Twitter or influence its management or business.

The next day, however, he was offered a position on Twitter’s board, and a couple of weeks later, the world’s richest man had clinched a $44billion deal to buy the social media giant.

The SEC investigation was first reported on Wednesday by The Wall Street Journal.

This week, Musk has also sparked fierce debate after saying he would allow Donald Trump back on Twitter if and when he takes the reins, in line with his previous declarations that he planned to err on the side of free speech rather than bans and censorship.