The Office for National Statistics has said sales volumes in October were 1.2 per cent higher than September – the sixth consecutive month – as online purchases continued to soar.

The rise is said to be partly down to some people having brought forward their Christmas shopping, in anticipation of potential further restrictions.

These fears were well-placed ahead of the closure of non-essential stores for a month on November 5 as the UK went into a second national lockdown due to the coronavirus pandemic.

It came as it was revealed that public sector debt reached a new high of £2.08trillion at the end of October after Government borrowing hit a record £22.3billion last month.

Millions of public sector workers face a pay squeeze to help pay for the pandemic with Chancellor Rishi Sunak expected to use next week’s spending review to unveil a new era of ‘pay restraint’ to plug the black hole in the public finances.

And, separately, a report found the UK economy contracted more than twice as much as that of any other G7 country in the first nine months of 2020 – with UK gross domestic product in the third quarter 9.7 per cent below its level at the end of 2019. 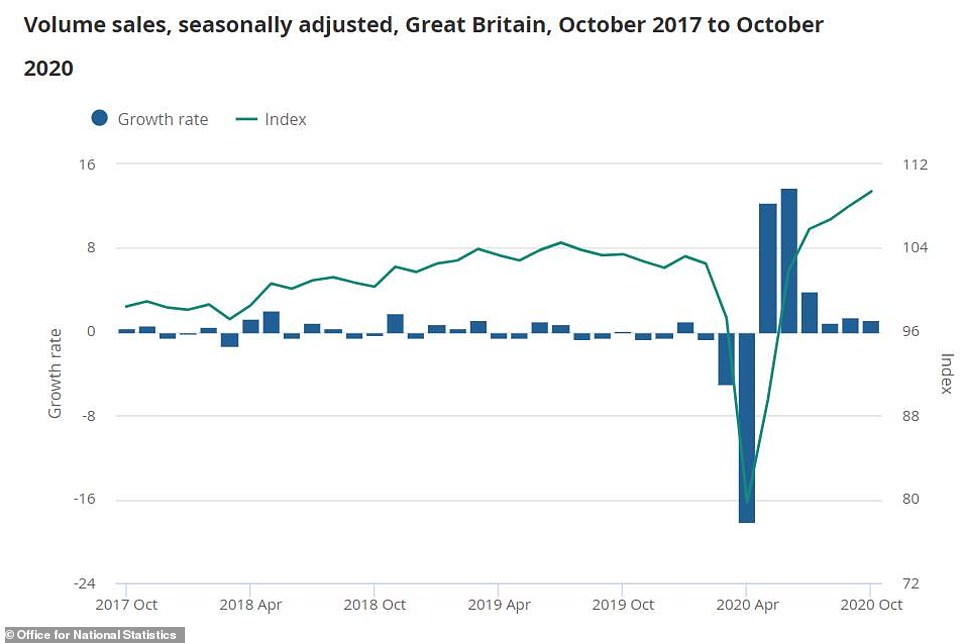 The volume of retail sales continued to increase last month and was 6.7 per cent higher than in February, pre-lockdown 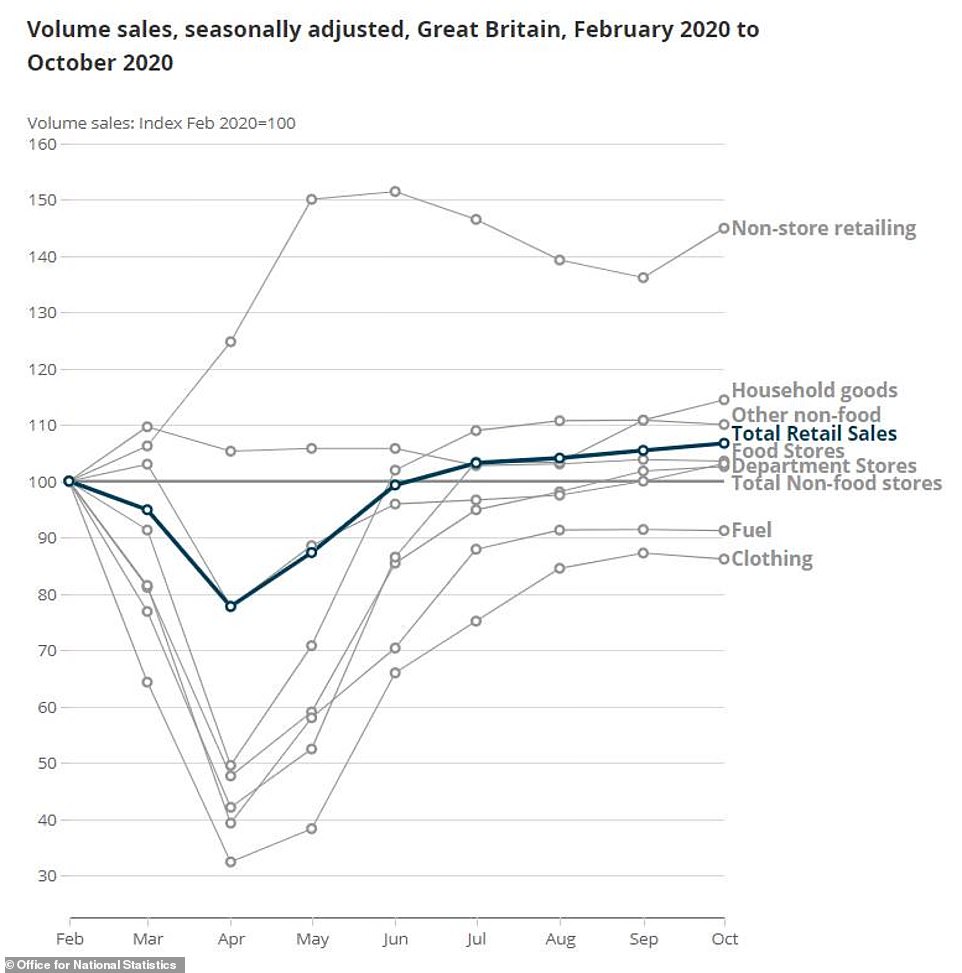 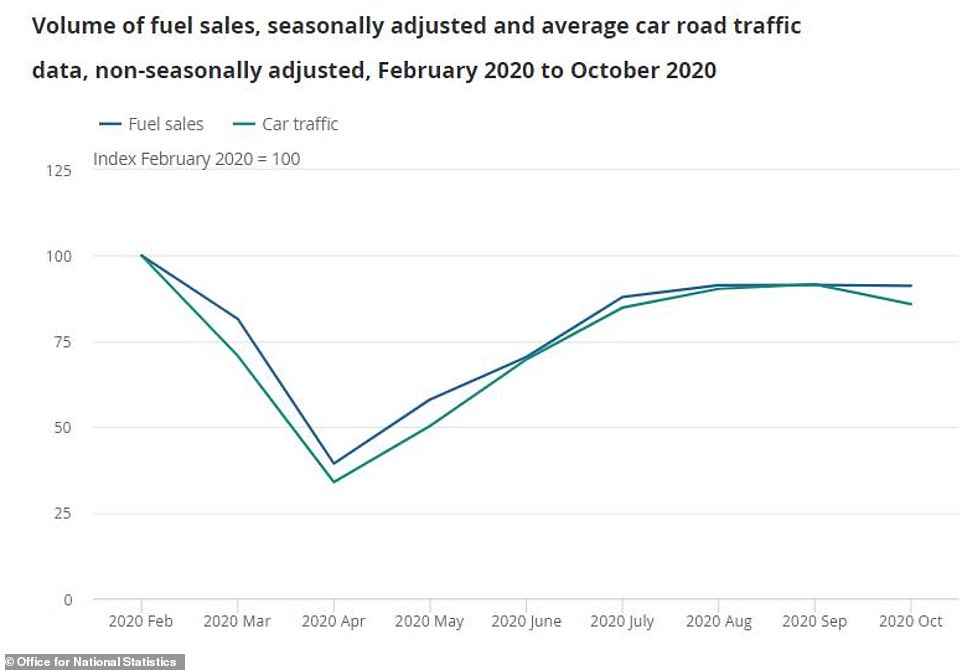 Fuel sales volumes were relatively flat last month as car road traffic reduced, although they are well up on levels in April

Shoppers have been trying to support businesses despite millions being told to work from home and avoid social contact due to lockdowns across the UK. Millions have been furloughed or even made redundant in 2020.

Yet retail sales volumes in October were 1.2 per cent higher than September despite restrictions tightening again in many areas of the UK, according to the Office for National Statistics.

The ONS revealed that sales grew for the sixth consecutive month as online purchases continued to soar.

The figures surpassed the expectations of analysts, with a consensus of economists forecasting a dip of 0.3 per cent for the month.

Sales for October were 5.8 per cent higher than the same month last year as retailers said ‘consumers had started Christmas shopping earlier this year’.

Shoppers spent more online during the month, as sales jumped by 52.8 per cent. Meanwhile, store sales declined by 3.3 per cent as shops in some regions were affected by tightened restrictions. 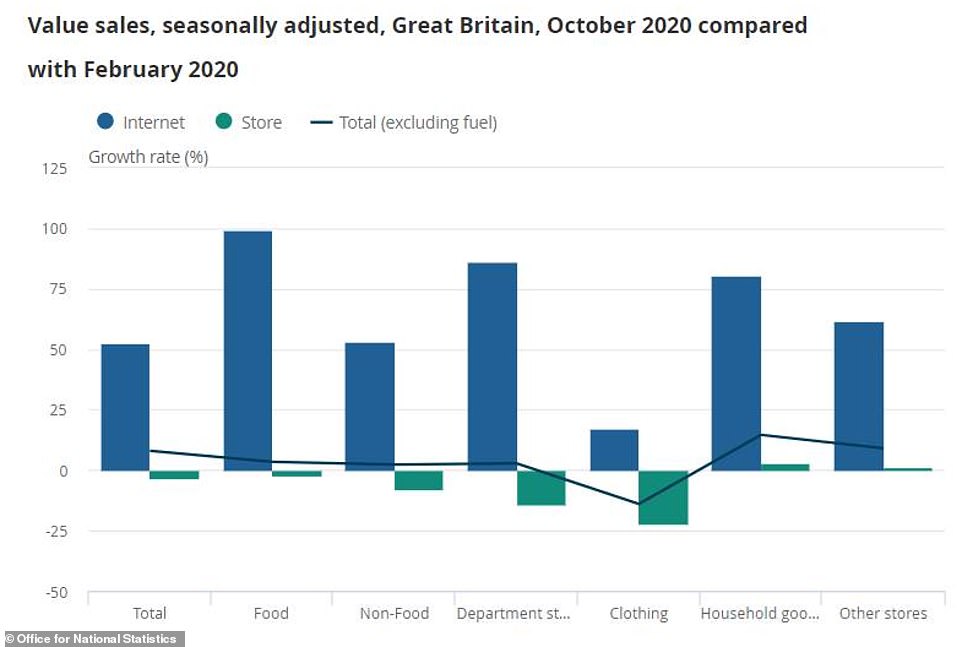 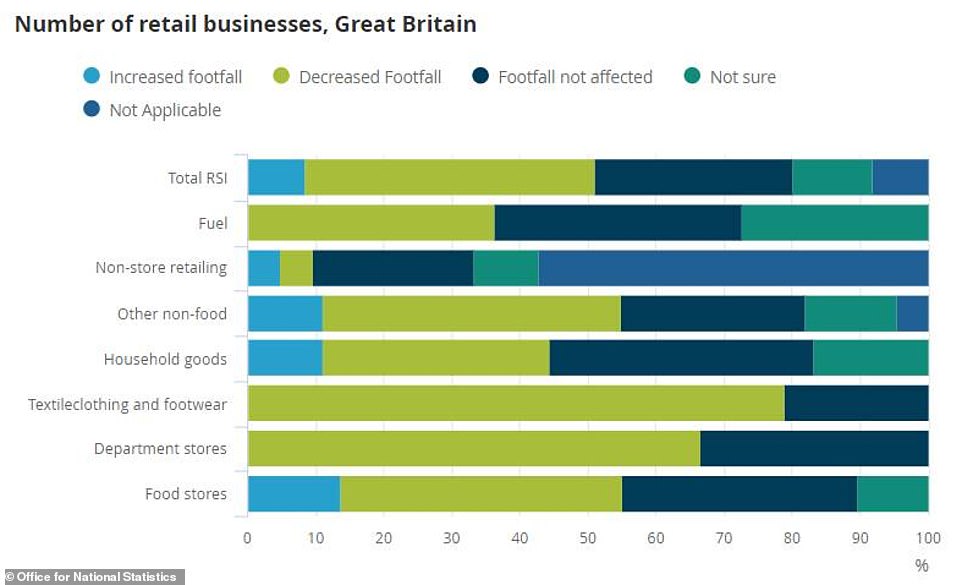 ‘However, the slow recovery in clothing sales has stalled after five consecutive months of increased sales.’

Clothing retailers reported a 14 per cent slump in sales values in October, as store sales plunged by 22.1 per cent. However, online sales of clothes increased by 17.1 per cent for the month.

Meanwhile, total food sales increased by 3.4 per cent after another surge in online purchases. 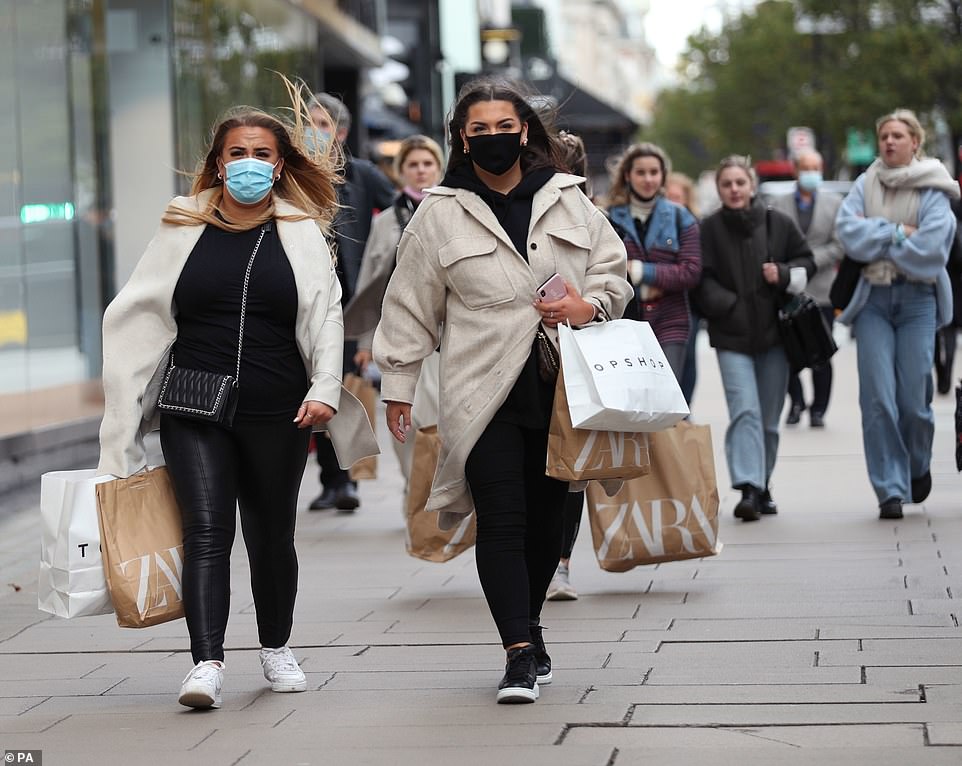 Shoppers walk along Oxford Street in London on November 2, three days before the second national lockdown was brought in 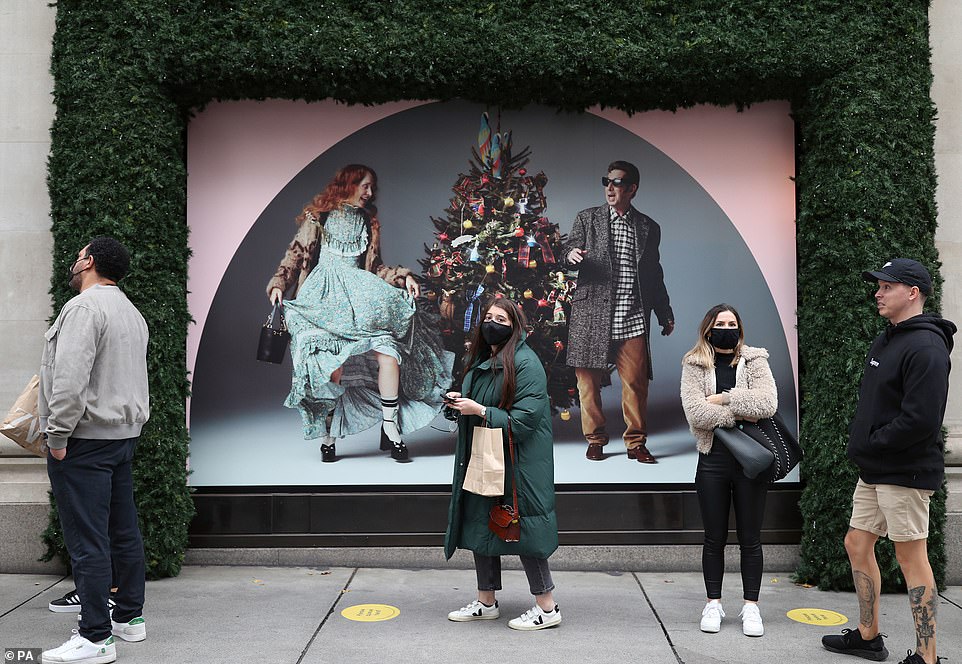 Lisa Hooker, consumer markets leader at PwC, said: ‘There was a recovery in almost every category of the sector, and measuring the period to October 31, these figures don’t include the last minute rush to the high street after the second lockdown was announced.

‘In fact, the only category to show a material decline in sales was fashion, with less demand for occasionwear and workwear continuing to hit an already beleaguered part of the market.

‘The closure of non-essential stores and slump in consumer sentiment earlier this month will severely hamper the sector with little over a month to go to Christmas and Black Friday just a week away.

‘Looking ahead to December, with online delivery capacity already stretched to its limits, retailers will be hoping for a swift lifting of lockdown restrictions and that consumers continue to show they can bounce back into spending mode, as they did after the first lockdown was lifted in June.’