The judge presiding over a Twitter defamation case brought by Defence Minister Peter Dutton against a refugee advocate has told the parties the lawsuit is not “amongst the biggest defamation cases” ever seen in the Federal Court and ordered the men to attend mediation.

Mr Dutton filed Federal Court proceedings in April against Shane Bazzi over a tweet on February 25 this year labelling him a “rape apologist”. Mr Bazzi was knocked back in his bid to apply for a visa to visit asylum seekers on Nauru in 2016 by the Nauru Consulate-General. 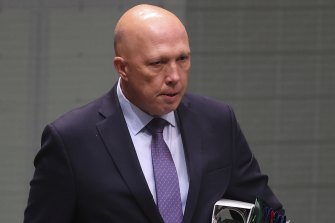 Mr Porter is expected to discontinue those proceedings, although this has not yet been done officially. A court fight is continuing over public access to a written defence filed by the national broadcaster in the Porter case earlier this year.

In his tweet, Mr Bazzi posted a link to a Guardian Australia article reporting Mr Dutton’s assertion on Sky News in 2019 that some women on Nauru “have claimed that they’ve been raped and came to Australia to seek an abortion”. Mr Dutton suggested they were “trying it on” in order to secure a medical transfer to Australia.

Mr Bazzi wrote above the link: “Peter Dutton is a rape apologist.”

The tweet was published in the wider context of reporting on allegations made by former Liberal staffer Brittany Higgins, who has said she was raped by another former staffer in Parliament House in March 2019.

At a preliminary hearing of Mr Dutton’s case on Wednesday, Federal Court Justice Richard White said “without meaning any disrespect to anyone … this would not be amongst the biggest defamation cases that have come before the court”.

“I would have thought that this is a matter that should be able to be settled,” Justice White said, although he added that as a judge he was not aware of any matters going on in the background.

Neither Nick Ferrett, QC, acting for Mr Dutton, nor Louise Goodchild, for Mr Bazzi, indicated their clients held out great hope of settling the proceedings after mediation but both said they were prepared to engage in the process. Justice White said even when parties were “reluctant participants”, mediation could be successful.

Justice White ordered Mr Dutton and Mr Bazzi to attend mediation in person by August 31 and work bona fide towards a resolution.

In a written defence filed in the Federal Court on May 28, Mr Bazzi is seeking to rely on the defences of honest opinion and qualified privilege.

Greens Senator Larissa Waters issued an apology in March for a February 25 tweet in which she accused the former home affairs minister of being an “inhuman, sexist rape apologist” after he said he hadn’t been “provided with the ‘she said, he said’ details of the allegation” involving Ms Higgins.