‘If you care about humanity get the prime minister to act!’ Doctor’s impassioned plea for government to enforce a London lockdown now as she claims the capital’s ITU beds are ‘nearing capacity’

A palliative care doctor has issued an impassioned plea to the Health Secretary, Matt Hancock after claiming the capital’s ITU beds are nearing capacity.

Dr. Rachel Clarke, an Oxfordshire based doctor and author, took to Twitter to call on Mr Hancock to intercede and ask Boris Johnson to shut London’s pubs down.

‘If you care about humanity, then please – please – get the prime minister to act.

I am literally begging you,’ she tweeted.’

Dr Clarke’s comments come after Mr Hancock appeared on Question Time last night and said, ‘It is because we are all human that we are susceptible to coronavirus – and it is our shared humanity that means we will pull together to defeat it.’ 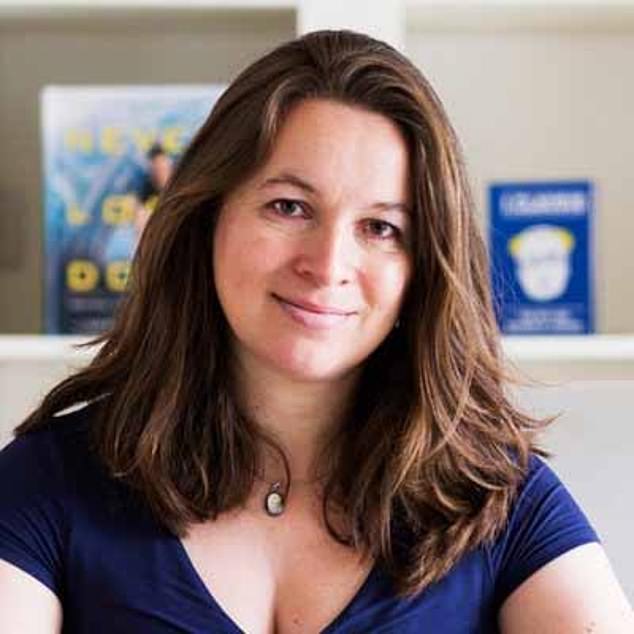 Dr Rachel Clarke, a pallative care doctor, made the plea to Matt Hancock on Twitter

An NHS source told MailOnline that while it is correct that ITU beds in London are nearing capacity, Dr Clarke’s tweet is taken out of context as more normal wards are freed up for intense care beds as more non-emergency operations are cancelled.

MailOnline has contacted NHS England and is awaiting comment.

Dr Clarke’s warning comes as medical professionals around the world took to social media to urge people to do more to help them in their fight against coronavirus by staying at home.

Doctors and nurses from around the world have joined forces to promote a Stay Safe online campaign. 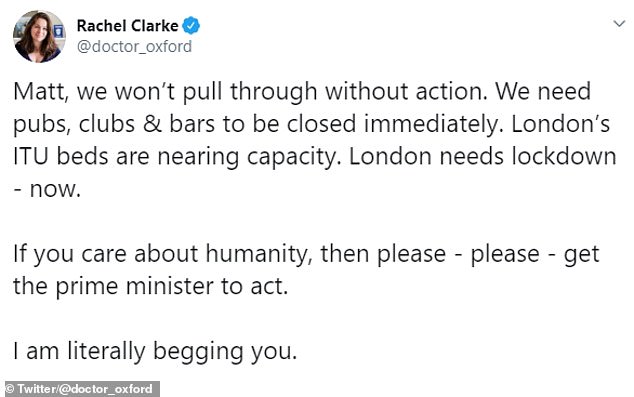 An NHS source told MailOnline that while it is correct that ITU beds in London are nearing capacity, Dr Clarke’s tweet is taken out of context as more normal wards are freed up for intense care beds as more non-emergency operations are cancelled

The plea from health professionals for others to curb outdoor activities came as many revelers continued to visit pubs and restaurants this week with packed scenes in some cities on St. Patrick’s Day.

London faces plunging deeper into lockdown – and potentially with just 12 hours’ notice – amid fears the ‘superspreader city’ is driving the UK’s coronavirus outbreak.

Dozens of social media users have been quick to point out that many are continuing to ignore government advice and putting each other at risk.

Drinkers were also seen out and about in Leeds, although in smaller numbers compared to previous nights. 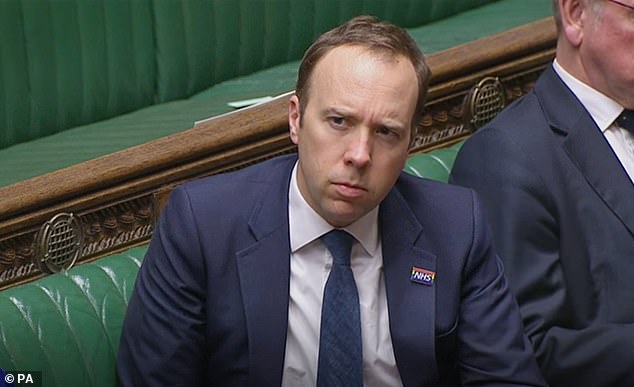 Taking to TikTok, two nurses clad in surgical gowns, masks and gloves, took it in turns to hold up paper signs to the camera pleading with the public to show responsibility.

‘We also family but can’t stay home,’ one message read, followed by, ‘We are not on vacation,’ and ‘Be responsible stay home because I can’t.’

Twitter user Sunshine Moon shared a picture of her and a colleague at a hospital in Germany.

She wrote on Twitter: ‘We as nurses in all categories and doctors all over the world work under high pressure.

‘Some of us even stay in nursing homes and hospitals. Heroes don’t wear a cape these days.

‘God bless you and stay healthy.’

Chris Brereton who’s fiancee is a nurse in the North West also urged members of the public not to be selfish.

‘My exhausted fiancee, a f***ing heroine, has just got in from her hospital shift. One three-minute chat with her would convince anyone still going to pubs etc that their actions are the stupidest and most ludicrously selfish thing they will ever do in their lifetime. Get indoors,’ he posted on Twitter.

Another team of medics at a Turkish hospital posed with their handmade signs as part of the Stay Safe online campaign.

Meanwhile another team of doctors held their hands in a triangle shape – while one person held up the written sign telling people to ‘please stay home’.

The government has said all hospitals will be provided with enough ventilators and protective clothing. 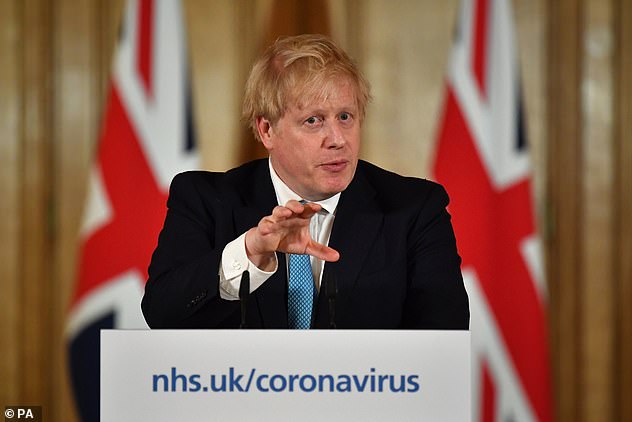 Boris Johnson said in a conference Thursday: ‘At the moment the disease is proceeding in a way that does not seem, yet, to be responding to our interventions’ – he urged people to follow the advice to not go out in public or travel unless they cannot avoid it

Meanwhile it has emerged that letters are being sent to more than 65,000 retired doctors and nurses in England and Wales asking them to return to work amid the deepening crisis to boost frontline services.

Anyone who quit or retired in the past three years is being urged by ministers to return to help tackle coronavirus.

Emails, which will go out this morning, echo Lord Kitchener’s Your Country Needs You recruitment poster from the First World War. Staff will be allowed to re-register immediately with either the General Medical Council, the doctors’ professional watchdog, or the Nursing and Midwifery Council, its equivalent for nurses.

They will complete a brief online survey on their experience and skills and be offered roles in hospitals, GP surgeries, social care services and the NHS 111 helpline.

Several hotel chains are in talks with the Government about offering up extra bed space to help hospitals. They include Best Western, which has 270 properties across the UK and has already promised to give up 15,000 bedrooms, 90 per cent of its total.

NHS officials have not put a figure on the number of former doctors and nurses they expect to bring back but last week, Health Secretary Matt Hancock said he hoped to ‘get our hands on as many as possible’.

All returning staff will be paid fully according to the amount of time they can work and will be given brief training and induction. The NHS is also allowing some of the most experienced trainee doctors and nurses to join the front line. 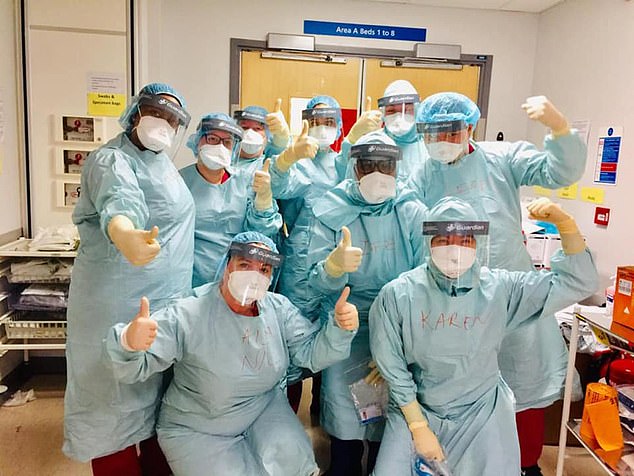 A brave team of medics at Queen Elizabeth’s Hospital in Woolwich, south east London pose for a pic in their protective kit before starting a shift on an isolation zone

HOW MANY NEW CASES HAVE EUROPEAN COUNTRIES DIAGNOSED IN THE PAST WEEK?

Between March 12 and March 18, the 12 hardest-hit countries in Europe diagnosed more than 53,000 new cases of the coronavirus between them. This is how they divided up:

Those in the final year of their degrees will be allowed to take up paid roles without having to pass their final set of exams.

Mr Hancock said: ‘To further boost the ranks of our NHS, we are now turning to people who have recently left the healthcare professions who can bring their experience and expertise to our health system.

‘They can play a crucial role in maximising our capacity to fight this outbreak – and wherever they can help, they will be hugely welcomed. This continues to be a huge national effort to protect lives and protect our NHS, and I urge everyone to continue following the latest medical advice.’

The Nursing and Midwifery Council is sending emails today to 50,000 nurses whose registration has lapsed in the past three years, while the General Medical Council will do the same for 15,500 doctors.

Professor Stephen Powis, NHS national medical director, said: ‘By offering to return to the NHS now, these thousands of well qualified and compassionate people will make more of a difference than ever before – not just to patients, but to colleagues and the wider community.’

Ruth May, chief nursing officer for England, said: ‘As the health service gears up to deal with the greatest global health threat in its history, my message to former colleagues is: Your NHS Needs You.’ The Government hopes to sign up thousands of the public as NHS volunteers to help fetch medicines, feed patients and carry out admin.

Chief Medical Officer Professor Chris Whitty warned last night that London hospitals would soon be under severe pressure as measures such as social distancing and school closures intended ‘to pull down the peak’ of cases would take time to have an effect. ‘Even if everybody does all the things we hope they will do, the numbers will continue to go up over the next two weeks,’ he said. 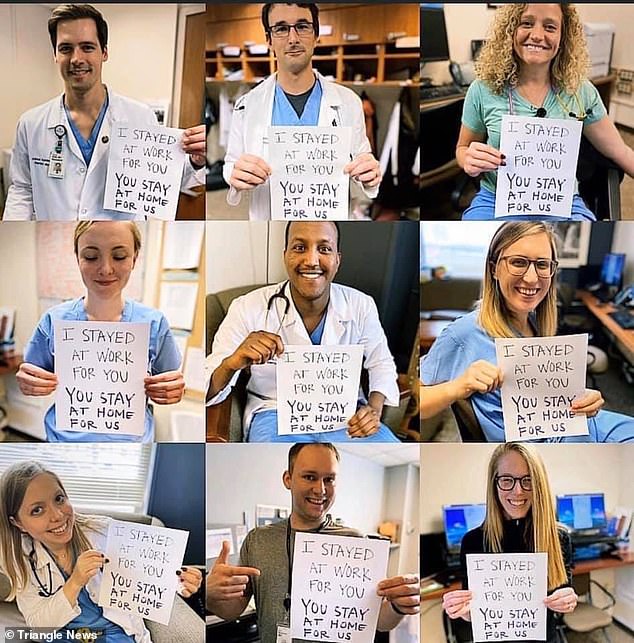 ‘I stayed at work for you you stay at home for us,’ medical professionals from Abbot Hospital, Minnesota joined a campaign to get people to stay indoors

The UK’s coronavirus outbreak is one of the fastest escalating epidemics in Europe, official statistics have revealed.

The number of diagnosed coronavirus patients in the UK has risen to 3,269.

676 people were diagnosed with the virus yesterday, more than in Switzerland, the Netherlands, Belgium, Norway, Sweden, Austria or Denmark.

Only Italy, Spain, France and Germany are seeing faster growth but all have significantly higher numbers of cases – each with at least 7,000 cases each. 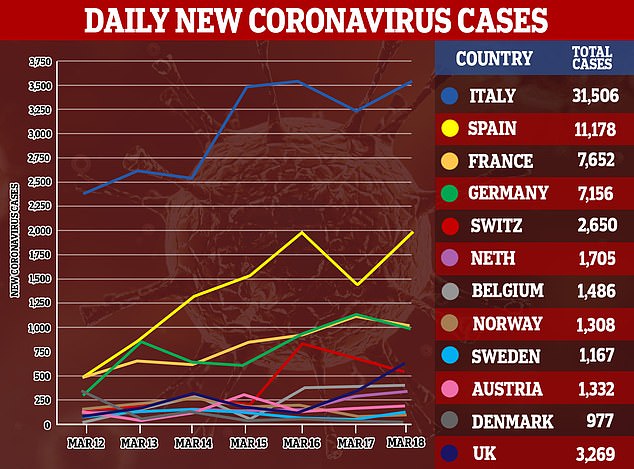 Switzerland, which has a comparable number of patients to the UK, saw just 450 new cases between Tuesday and Thursday whereas Britain has had 1,083.

Prime Minister Boris Johnson this week acknowledged the epidemic was entering its ‘fast growth phase’ and scientists have said Britain and other countries are just weeks behind Italy, which is in the grip of the worst outbreak outside of China.

Speaking in a conference on Monday Mr Johnson said the UK was approaching the ‘fast growth part of the upward curve’ in the number of cases.

‘Without drastic action, cases could double every five or six days,’ he said.

In his national address today Mr Johnson said: ‘At the moment the disease is proceeding in a way that does not seem, yet, to be responding to our interventions.

‘I believe that a combination of the measures that we’re asking the public to take and better testing… will enable us to get on top of it within the next 12 weeks and turn the tide.

‘I cannot stand here and tell you that we will be on the downward slope [by then] – it’s possible but I simply cant say that that’s for certain.

‘We don’t know where we are and we don’t know how long this thing will go on for but what I can say is that this is going to be finite.

‘We will turn the tide and I can see how to do it within the next 12 weeks.’