‘What was really in that needle you put into Matt Hancock?’ Disgusting moment antivaxxer ‘family entertainer’ hurls abuse at Jonathan Van Tam for ‘genocide, lying to the country and ruining the economy’ – just weeks after he accosted Chris Whitty in street

An anti-vaxxer protester has filmed himself yelling abuse at Jonathan Van-Tam and accused him of ‘genocide’, lying and ruining the economy during the pandemic.

Geza Tarjanyi, 60, of Leyland, Lancashire, targeted the Deputy Chief Medical Officer as he walked into the Ministry of Defence building in Westminster yesterday.

He also asked him ‘what was really in that needle that you put into Matt Hancock’, in relation to Professor Van-Tam giving the Health Secretary his first Covid jab in April.

And Mr Tarjanyi shouted at Professor Van-Tam while a receptionist in the building asked him for advice on whether he should have the Pfizer or AstraZeneca vaccine.

It comes three weeks after Mr Tarjanyi, who is a family DJ and producer, also targeted Chief Medical Officer Chris Whitty in the street, accusing him of lying to the public.

Mr Tarjanyi has become known online for his activism against 5G mobile networks, fracking, mask wearing and other public health measures during the pandemic. 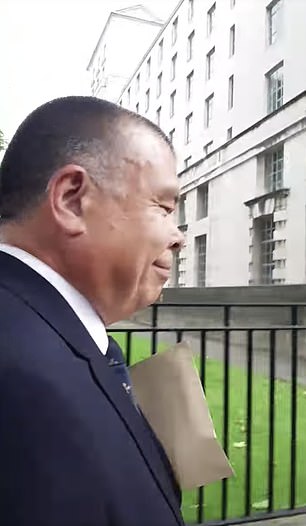 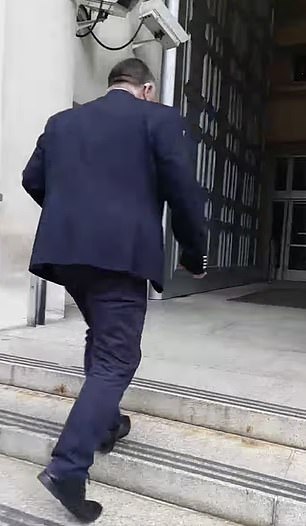 The video, uploaded to Facebook yesterday, began with Mr Tarjanyi spotting Professor Van-Tam walking on the street in front of Victoria Embankment Gardens.

He said: ‘Are you Van-Tam, aren’t ya? What was really in that needle that you put into Matt Hancock? Why are you continually lying to the British people? Why are you smiling? This country’s supposed to be in the worst pandemic of all time.’

Ivermectin is trialled as a potential at-home treatement for Covid

Researchers are looking into whether a drug normally used to fight infections from parasites can be used to treat those infected with Covid-19.

Ivermectin – which was mentioned by anti-vaxxer Geza Tarjanyi while he abused Professor Jonathan Van-Tam yesterday – led to a reduction of virus replication in laboratory analysis and a pilot study showed the drug could also reduce viral load and symptom duration in patients with mild Covid-19.

The Principle study, led by the University of Oxford, will look at the efficacy of the treatment which has been used in Latin America and South Africa during the pandemic.

The use of ivermectin has been controversial as there is ‘little evidence … to demonstrate that it can speed up recovery from the illness or reduce hospital admission’ in large-scale randomised studies, according to Oxford researchers.

Professor Chris Butler, from the University of Oxford’s Nuffield Department of Primary Care Health Sciences, said the study would look to test its efficacy.

He said: ‘Ivermectin is readily available globally, has been in wide use for many other infectious conditions so it’s a well-known medicine with a good safety profile, and because of the early promising results in some studies it is already being widely used to treat Covid-19 in several countries.

‘By including ivermectin in a large-scale trial like Principle, we hope to generate robust evidence to determine how effective the treatment is against Covid-19, and whether there are benefits or harms associated with its use.’

The study is part of a wider one evaluating treatments that can help people recover more quickly from coronavirus and prevent the need for hospital admission, and ivermectin is the seventh drug to be analysed.

In the Principle study, people aged 18 to 64 with certain underlying health conditions or shortness of breath from Covid-19, or aged over 65, are eligible to join the trial up to two weeks after a positive test or experiencing symptoms.

Participants will be given a three-day course of treatment and then followed-up for 28 days with comparisons drawn against those who have been given standard NHS care.

Professor Van-Tam politely replied: ‘It is.’

But Mr Tarjanyi continued: ‘And you keep lying to the people. So, Chris Whitty never speaks to me. Do you think you’re brave enough to speak to me, and explain to the British people why you’re lying to them?

‘Why you’ve crushed their economy, lies after lies. Why have you prohibited hydroxychloroquine and ivermectin? Is this true or not? Why of all the people in the NHS were you administering the vaccine to Matt Hancock?’

Professor Van-Tam then walked into the Ministry of Defence building, but Mr Tarjanyi added: ‘You see, you can run, but you can’t hide, Van Tam.

‘The British people are going to get justice for what you’ve done to this country. All of you liars will be going to prison, I guarantee it. Every single one of you, a traitor to the country. A genocide.’

Mr Tarjanyi then followed Professor Van-Tam into the building, continuing to abuse him while he spoke to the receptionist.

‘You’re a health specialist aren’t you, what were you doing in here? This is the Ministry of Defence, sir. Are you going to explain to us?

‘Why can’t you talk, why can none of you talk? We’re all supposed to be on the same side against the virus aren’t we? So why do you keep lying to people?

‘You’re one of the experts for Boris Johnson, the liar, the cheat, to this country. Two seconds it takes just to have a conversation outside.’

The receptionist can then be heard asking a question to Professor Van-Tam, saying: ‘I have a question. Pfizer, or, does it make a difference, Pfizer or?’

The receptionist then said to Professor Van-Tam: ‘Can you hear me?’ – but the expert replied: ‘What? I’m finding it difficult.’

The receptionist continued: ‘Oh, the vaccine, does it make a difference, the Pfizer or the other one?’

Professor Van-Tam then said: ‘Pfizer or AZ? Yeah, I’ll have a conversation about that shortly.’

And Mr Tarjanyi added: ‘Oh, Pfizer or AZ? I see, that’s what you’re here for is it? Why would you be talking about that in the Ministry of Defence, about Pfizer or AZ?’

Staying calm, Professor Van-Tam asked the receptionist: ‘Can you get rid of this chap?’ 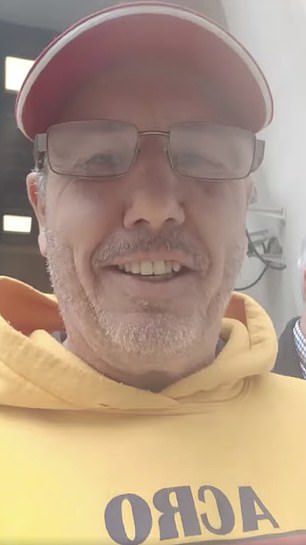 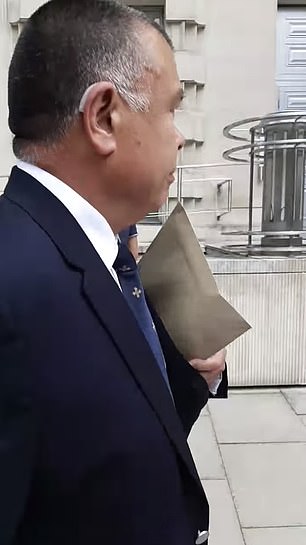 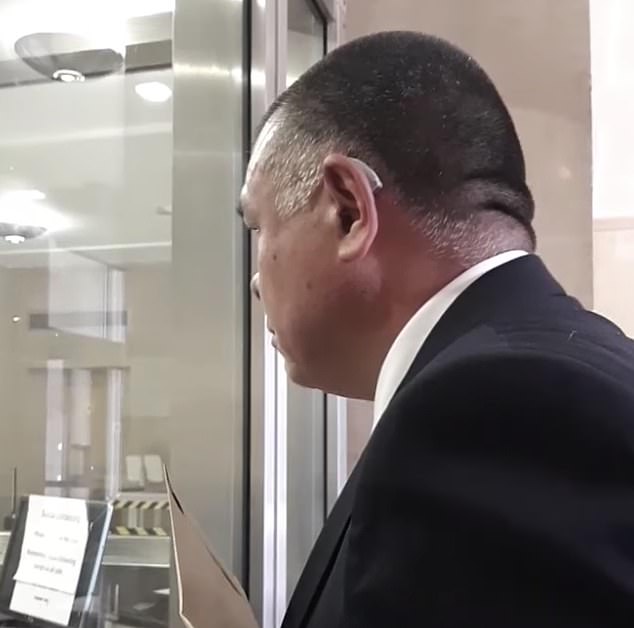 ‘Why have you got so much control over this country? Why have you not got any bodyguards? Why are they leaving you out to dry?’

Professor Van-Tam then walks away and into another part of the building, with Mr Tarjanyi saying: ‘Bye, bye, Van-Tam, see you in court.’

Mr Tarjanyi then leaves the building, saying: ‘Got him. We got him, guys. That’s it. Listen, I’m not scared of anything. We are lawful citizens of this country.

‘If I get arrested today, that guy’s in court. So if they say harassment or anything like that. He actually mentioned in there, mentioned AstraZeneca in that building– I’ve got him – ‘Pfizer or AstraZeneca, which one is it’? Professor Jonathan Van-Tam appears at a news conference at Downing Street on May 19, 2021 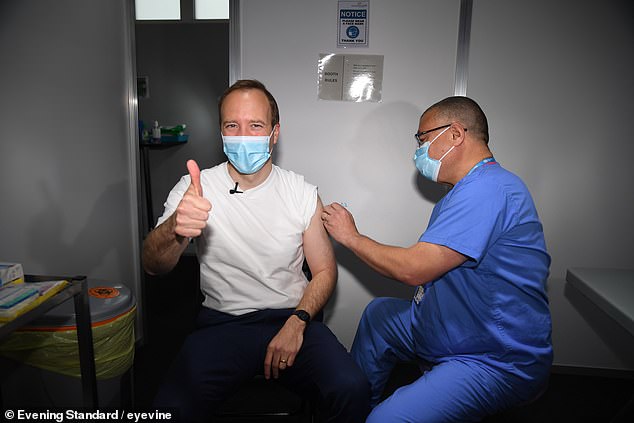 ‘They’re in the Ministry of Defence now. What’s his name has just gone in today, warmonger Wallace has gone in there today. Share this everybody.

‘Share this with everybody. The scumbags of this country are coming down. Justice for all, justice for all those people that have died unnecessarily in our rest homes, in our hospitals. Our children now, we are going to protect them. Everybody stand up.

‘We got him. He went in there, he even mentioned Pfizer and AstraZeneca – he said, ‘can you get rid of this guy’? Well tell you what, share it round everybody. I’m Geza Tarjanyi and I’m going to go after all these people. We got him.

‘He actually went in there – he mentioned Pfizer and AstraZeneca. I thought he was talking about the mask. He said ‘can you get rid of this guy’? Boris, you’re going to prison. Share this everywhere.

It comes three weeks after Mr Tarjanyi targeted Professor Chris Whitty, the Chief Medical Officer for England, in Oxford and accused him of lying to the public

Professor Whitty was shown walking briskly down a street as he was followed and bombarded with questions.

‘Oxford-AstraZeneca right in the centre – what a surprise you’re here. Come speak to us Chris, come speak to the public – you’re the expert. Is Bill Gates funding this?’

Professor Whitty, wearing a suit and backpack while carrying a briefcase, was shown hurrying down the road away from the man and refused to reply to his comments.