A former shadow Home Secretary has questioned the actions of armed Metropolitan Police officers after a 12-year-old boy was cuffed over a toy gun they thought was real.

Diane Abbott, Labour MP for Hackney North and Stoke Newington, said their actions did not fall in line with ‘community policing’ and followed up her comments with the Black Lives Matter hashtag on Twitter.

Her criticism comes after a team of officers with sniffer dogs stormed the home of 12-year-old Kai Agyepong in Camden, north London, on the evening of July 17. 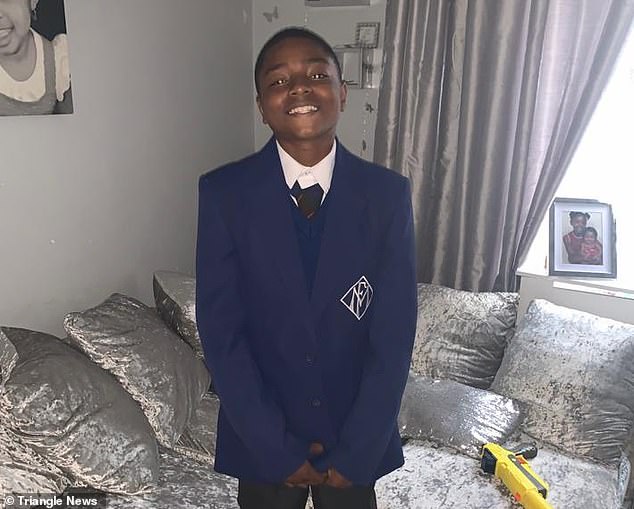 Labour MP Diane Abbott has hit out at the Met Police after Catholic schoolboy Kai Agyepong, pictured, was dragged out of his Camden home at night and arrested at gunpoint 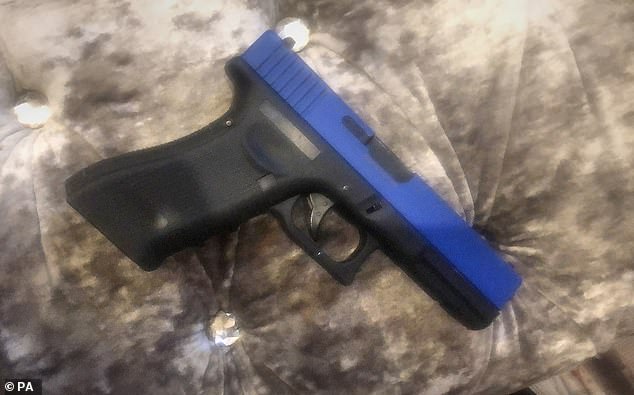 In reality, the ‘firearm’ was a BB pellet gun that had been fitted with a blue slider to distinguish it from the real thing 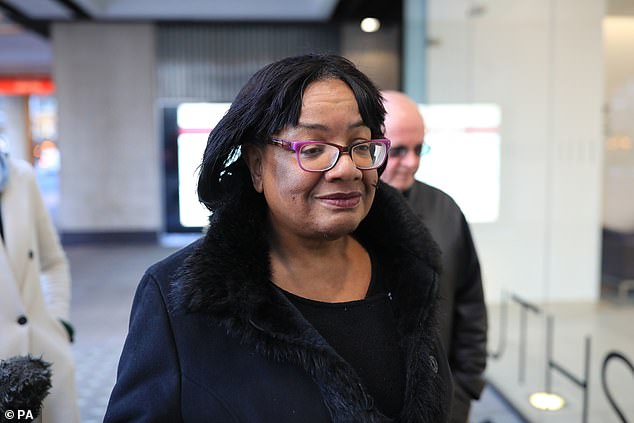 The schoolboy was arrested at gunpoint and put in the back of a police car while officers searched his home.

The force said they had received a call from a member of the public claiming to have seen a black male holding a firearm and yesterday issued a statement justifying their actions because of a number of shootings in London recently.

In reality, Kai was holding a BB pellet gun that had been fitted with a blue slider to distinguish it from the real thing.

Speaking on Twitter this morning, Diane Abbott said: ‘How can the Met Police possibly justify arresting a 12 year old at gunpoint, handcuffing him & putting him in a police van?

‘This after dozens of armed police officers raided his home at 11.00 at night. All over a toy. Is this what they call community policing? #BlackLivesMatter’

Alice, who also has two daughters living at home aged 16 and 23, told the Triangle news agency: ‘In my mind there was no question they were going to shoot us.

‘Their guns were drawn in such a way they were aiming their rifles at me and my kids.’

The schoolboy was playing on a laptop while sat on the sofa with his mum Alice when the gun cops stormed in.

A passer-by claimed he had seen a black male with a gun inside their home and reported it to police.

In fact he had just been playing with a BB pellet gun in the living room.

Scared Kai had red laser guided guns aimed at him as he was nicked and put in a police car outside. 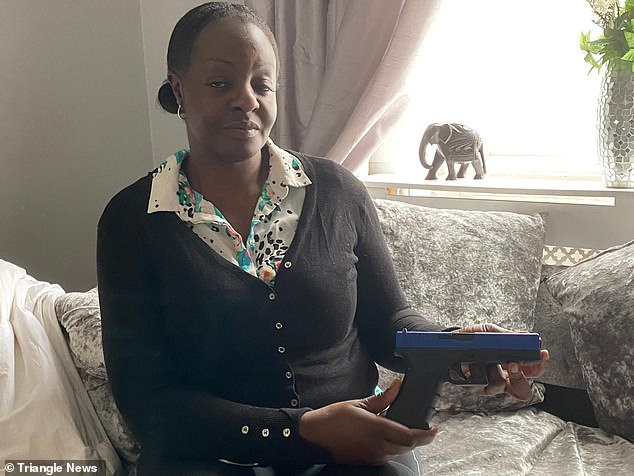 The boy’s mother Alice, pictured, has accused the Met of racially profiling her family 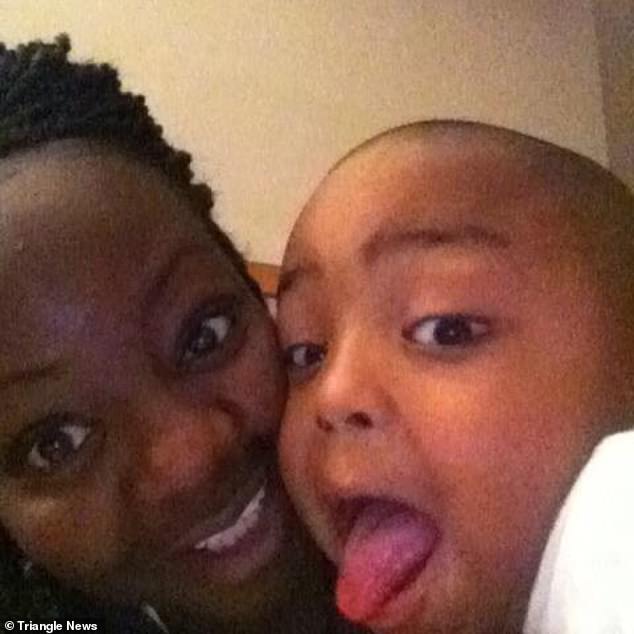 The schoolboy was playing on a laptop while sat on the sofa with his mum Alice when the gun cops stormed in. Kai pictured with mother Alice above

But he was de-arrested after cops realised it was just a fake gun and cops were forced to apologise.

‘They had visors on and sniffer dogs and there was commotion and barking. Kai was immediately handcuffed.

‘My daughter noticed he was so distressed and was saying: ‘Kai, calm down.’

‘They took him away and I didn’t know if he had been taken to a police station.

‘It was so surreal – my initial reaction was utter disbelief because I had gone from being asleep on a normal Friday night to having the cavalry dressed at my door with very big guns. 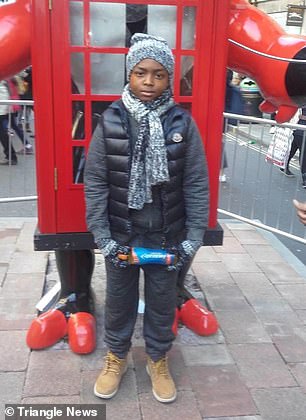 The family said they feared they would be shot after armed officers stormed their home  at night. Catholic schoolboy Kai pictured above

‘I went from utter disbelief to trauma because my children were at significant risk of being shot.

‘I knew none of us were safe because if they got spooked or felt threatened they’re going to shoot us and when one starts shooting they all start.

‘They had proper killing machines and they were aiming at us. I looked at the kids and could see the lasers on their bodies.’

Once Kai had been taken away, Alice and her daughter were moved out into the street so cops could search the house.

Alice added: ‘When we went outside it was like a scene from Terminator.

‘All I saw was flashing lights and so many police vehicles. I felt like the entire police station was there.’

Alice said the Met had thrown ‘every single resource except a helicopter’ at the incident, adding that in addition to the armed officers and dog unit, there were two vans of ordinary PCs and an ambulance.

Even after being shown the BB gun, the police still conducted a full search of the premises lasting more than an hour.

Alice said her son had ‘undoubtedly’ been racially profiled.

She said the Met had explained the incident by saying senior gang members often leave knives and firearms with younger boys in the hope they will be less likely to be discovered.

Yesterday, a senior Met police officer issued a statement to justify the actions of the firearms team.

Commander Kyle Gordon, the Met’s lead for firearms, said: ‘There have been a number of well-publicised shootings in London in recent months where members of the public have been injured. 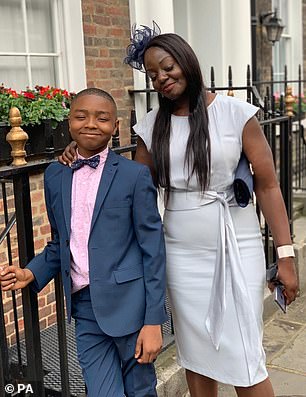 Alice, who also has two daughters living at home aged 16 and 23, told the PA news agency: ‘In my mind there was no question they were going to shoot us’. Alice pictured with her son Kai, above

‘As the public would rightly expect, we take every report of a firearm seriously in order to protect our communities.

‘Officers attending reports such as this must treat them as genuine until they can verify whether or not an actual firearm is present.

‘Based on the information at hand, the officers acted in line with their training and my expectations, enabling the incident to be concluded as quickly and safely as possible.’

Commander Gordon said he had watched the body-worn video of the incident and said he was ‘content’ with the officers’ professionalism and how they had explained to residents what was going on.

‘The reporting member of the public was right to call us and we would encourage others who see similar weapons to do the same,’ he said.

‘We are committed to bearing down on violence and we rely on our communities to help us do this.’

He added that Kai had been immediately dearrested as soon as officers had established the only weapon in the house was the BB gun.

Ms Agyepong said Kai had been left traumatised by the incident, becoming anxious if she even leaves him just to nip to the shops.

‘It was very, very humiliating but more than that, for me and my kids it was terrifying.’