London: Diana, Princess of Wales, famously referred to them as the “men in grey suits”. Prince Harry and Meghan, the Duke and Duchess of Sussex, simply cited “the institution”.

Yet with the spotlight now falling on the people who advise the royal family — as well as the “principals” themselves — are criticisms of palace staff justified?

Notwithstanding the alleged question about the colour of Archie’s skin, said to have been uttered by an unnamed family member, the professionalism of everyone from the human resources department to the Queen’s own private secretary, Sir Edward Young, has been called into question by the Sussexes’ interview. 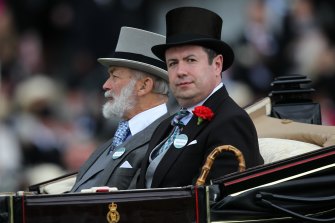 Edward Young, then deputy private secretary to the Queen, at Royal Ascot in 2011.Credit:Getty Images

The “if in doubt, blame the staff” mantra might seem a convenient foil to a couple accused of “outrageous bullying”, but there is some justification to Harry and Meghan’s exasperation with interfering aides working within an outdated system.

Take one look at the make-up of the Lord Chamberlain’s committee, which runs the royal household, and it soon becomes clear why Meghan may have felt misunderstood by the palace powers-that-be: there has never been a woman — or non-white person — among its leadership.

The blame game has already begun behind palace gates, with both Sir Edward and Clive Alderton, the Prince of Wales’ private secretary, described as “dead men walking”. 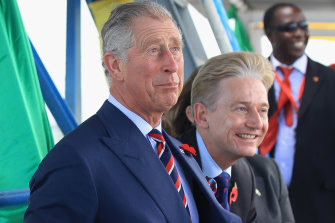 Prince Charles, left, shares a joke with Clive Alderton, his private secretary, on a ferry in Dar Es Salaam, Tanzania, in 2011..Credit:Getty Images

The pair is regarded to have assumed too much power over decision making after Christopher Geidt, the Queen’s former private secretary, was forced out in 2017, around the time Her Majesty’s other trusty “disciplinarian”, her husband, the Duke of Edinburgh, 99, retired from public life.

As one royal source put it: “In forcing Geidt out, Prince Charles and Prince Andrew made a grave error.

“They thought he wielded too much influence but as the transition has gone on … senior aides have stepped even further forward in the institution. The royals now find themselves approving decisions that have already been made.

“So Harry is right about his father and brother being trapped – they are now in the topsy-turvy world of them being held hostage by their own households. It’s not been done out of malice — these senior officials think they know best. But they always act tactically rather than strategically.”

It is hoped that ex-MI5 boss Lord Parker will bring a new approach when he succeeds Lord Peel as Lord Chamberlain next month.

It is not as if there isn’t a good stock of fresh professional blood inside the palace either. Gone are the days when you had to be a member of the military or the aristocracy to work for the royal family. Figures such as Sir Alan “Tommy” Lascelles, depicted in The Crown as bossing the then 25-year-old Queen around when she acceded the throne in 1952, do not exist any more.

Yet the introduction of so-called “commoners” is not without its pitfalls either. According to one former palace employee: “You can be much franker with, say, a government minister than a royal — you’re always having to dial it down a bit.

“We didn’t grow up in Downton Abbey so we don’t always understand the politics of everything. The etiquette can be mind-boggling, let alone the execution.”