Trees crashed through John Carlyle’s loungeroom roof and destroyed much of his Kalorama house, yet he has chosen to remain among the devastation left by Wednesday night’s storm.

Despite being warned it is unsafe to stay, Mr Carlyle has no plans just yet to leave the Dandenongs house he built himself over seven years even though it is virtually uninhabitable. 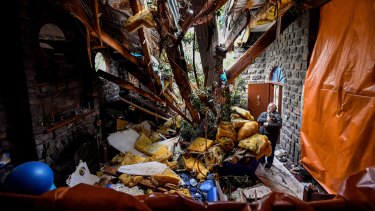 John Carlyle in his Kalorama home, which was partly destroyed by five falling trees.Credit:Joe Armao

“Until it’s locked up and safe my plan is to stay,” he said.

Mr Carlyle is one of thousands of Victorians whose homes and properties were devastated when wild weather lashed large parts of the state last Wednesday night.

A week on, in the cold of winter, many of those living in the hardest-hit and most remote parts of the state including the Dandenong Ranges remain without power, water and telecommunications. 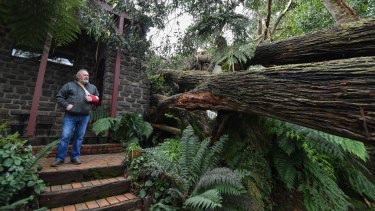 Katie Williams’ parents, aged 80 and 71, live in the tiny township of Yellingbo, 48 kilometres east of Melbourne in the Yarra Valley.

Still without power six days after the damaging storm, Ms Williams said her elderly parents were bathing out of a bucket and huddling around a battery-powered radio as their only form of communication.

“Quite often these little towns get left out. Yellingbo is often not even on the map,” she said.

“But they have no landlines, no mobile network to check for emergency updates and if their house catches on fire, or they have breathing problems, they can’t call for help. 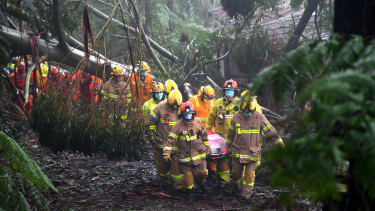 A woman was rescued from her Olinda house last Thursday after it damaged by a falling tree.Credit:Joe Armao

“These are tough people, but it’s hard work. We were crippled in one night.”

Damaging 100km/h winds and torrential rain began to lash parts of the state late on Wednesday night. By morning, close to 200,000 homes were without power.

The force of the wind uprooted hundreds of thousands of trees, some crushing homes, and 271 millimetres of rain fell on the Dandenongs alone.

On Tuesday, power had yet to be restored to more than 20,000 properties in areas including Woodend, the Yarra Valley, East Gippsland and the Dandenong Ranges.

In the east, the clean-up from major flooding is still underway in areas surrounding the Traralgon Creek and Thompsons Rivers east of Melbourne.

But damage remains littered across a vast 300-kilometre stretch from Ballarat to Sale.

Adding to the devastation was news on Tuesday that efforts to reconnect power to the most remotely affected were likely to push into next week.

Rain and thunderstorms are set to hit the state in coming days. Spokesman for AusNet power company Steve Brown said this could hamper efforts “pretty significantly”, with repair trucks already getting bogged in muddy areas. 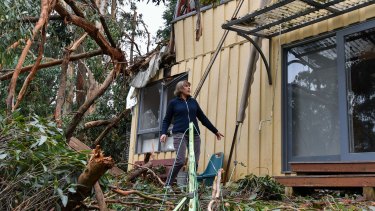 Lyn Osborne has second thoughts about rebuilding in Kalorama after the storm.Credit:Joe Armao

In Kalorama, Lyn Osborne is unsure whether she will rebuild her home after the storm destroyed much of the house.

“I’d love to stay on the mountain but having lived through that the other night I’m not so sure,” she said.

A tangle of enormous branches lies on what remains of the roof on her two-storey house. Ms Osborne was inside when the trees smashed through the roof and she had to be rescued by CFA crews, who arrived on foot because the road was blocked. In her backyard, a crater deeper than the height of a person has been left behind by two enormous grey gums ripped out of the ground.

Electricity has not yet been restored in Kalorama, but residents hop over the wires just to be sure.

Despite the enormity of the devastation, Ms Osborne said many people were ignorant about her community’s trauma.

“We believe half of Melbourne still hasn’t heard about it, and they need to know what’s happened up here.”

North-west of Melbourne, those in the Trentham and Woodend areas are also feeling the pinch a week on from the storm. 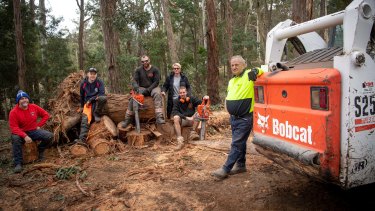 Woodend locals cleaning up in Garner Quadrant after the storm. Credit:Eddie Jim

Over beers in the middle of a timber-laden dirt road in Woodend, residents reflect nightly on an arduous day’s work clearing another home, sharing generators and hot breakfasts with those whose power is still out.

All say nothing would’ve been done without the community pulling together.

Not many in Phil Swain’s neighbourhood have slept much or had a wash since the storm tore through.

“It’s like being in a movie, it’s the only way to describe the feeling,” Mr Swain said. “We’re still in disbelief.”