The Premier Daniel Andrews’ announcement of a relaxation of the lockdown restrictions following days of much lower case numbers is welcome. It reflects the success of a determined government leadership that understands the serious threat of this pandemic, and a public that has shown much greater willingness to comply with advice than many others globally.

The Premier’s comment that “this has be a partnership” reflects an awareness that if we are to avoid a re-emergence of the virus the government will need to have an informed and willing community that shares its objectives and feels ownership of the strategy. This is exactly how public health systems work best. As rules start to ease, there will be more opportunity for us to move beyond rules imposed from above, and not always fully explained, to greater trust of, and engagement with, the Victorian population. 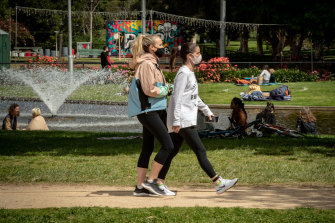 Victorian Premier Daniel Andrews has announced the easing of some restrictions on Sunday but epidemiologists question if he’s gone far enough. Credit:Getty Images

When we embarked on what was a conservative road map that cautiously mapped the way out of restrictions, many of us argued that the benchmark case targets were too conservative. It is good that as we have developed confidence in the capacity of our public health system to "capture" outbreaks and respond to them, we have relaxed these. However, we have not reframed our strategies to reflect our increased ability to control spread.

In fact there has been "rule creep" that deviates from the roadmap. Holding off on households meeting indoors for a little longer may be arguable, but not so maintaining the essence of the five kilometre rule into stage three, albeit extended to 25 kilometres. Even with the success of the public health response in Kilmore and Shepparton, the "ring of steel" around Melbourne will be reinforced.

The progress we have made in contact tracing and the extension of it to "contacts of contacts", a more comprehensive approach to case management and outbreak control, should make these geographical boundaries irrelevant. The response takes restrictions to wherever the virus is and should therefore remove the need for hard borders or limits on movement, or any fear that cases will quickly get out of control again.

Our lockdown, in effect, kept Melbourne “hosed down” so the Health Department could do its job putting out the remaining spot fires but can we afford this luxury and do we need it? We worry that mystery cases are somehow the tip of the iceberg and there may be at least twice as many cases out there. But even with mystery cases remaining at a steady level for now, our hospitalised cases continue to drop, with no deaths for four days all and plummeting case numbers.

We know from overseas studies that almost 70 per cent of cases never pass the virus on. This tells us the majority of mystery cases will peter out, whether detected or not. But if they do start a cluster and become visible, then the outbreak response strategies introduced over recent weeks will reduce the risk of wider spread through tailored containment of those at risk; cases, close contacts and their contacts.

Additional measures have also been introduced to maintain control of infections. We understand that DHHS will now look at antibody tests to see if that will help them to elucidate the transmission chains among broader contacts. It is also very reassuring to hear that a higher level of team scrutiny will apply to every case now to assess symptoms and pathology results. Workplace sentinel surveillance is progressively rolling out and, once in place, will help further protect high risk workplaces and monitor for wider community transmission.

Given the thoroughness of the responses described by DHHS, delaying the reopening of some industry, business and hospitality seems very conservative. The argument for keeping retail closed in the past has been that, while they do not present high risk settings in themselves, they do encourage movement and movement equates to spread of the virus; which may not be true with
such low case numbers.

There is as yet little understanding of the broader impacts of public health decisions, including mental health, economic and financial strain. Time was needed to rebuild our public health response during an extended lockdown, and this was a major piece of work in its own right. However a broader assessment of risk may have helped to guide the government in determining the best balance of risks when considering decisions on public health measures.

There are still inherent inequities in the rules, for example in favouring hospitality over religious services in regional Victoria. Indoor dining, where masks are not worn, has been extended to up to 40 patrons, but faith meetings are still only permitted outdoors, albeit increased from 10 to 20 participants. Those who have a regional residence have been denied access to their other home for many months now. Restrictions must be fully and openly scrutinised for equity and unintended consequences across organisations, sectors and communities.

We have a way to go yet to move away from the specific and detailed rules but we should celebrate where we have reached. We are down to 1.5 cases per million and should feel safe opening up. We will progressively be able to narrow our focus to prevention; the need to get tested early, not going to work if unwell, and other precautions to protect our regained low risk status. The public health team can then do their part to monitor and keep us safe, and all this will matter more as we open up. We are ready for this.