Lawyers fighting to block a Victorian government bid to throw out two COVID-19 class actions have urged a Supreme Court judge to give them a chance to litigate their case.

The class actions, brought on behalf of businesses and workers affected by last year’s second-wave lockdown, allege the state was negligent in its operation of hotel quarantine, which led to the virus seeping into the community and causing the surge. 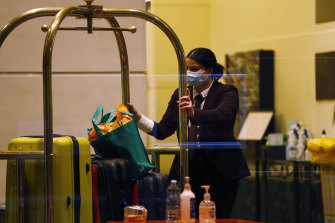 Staff inside the Stamford Plaza in June last year. The hotel was the site of a COVID-19 outbreak.Credit:Getty Images

The defendants, which include the health and jobs ministers and their secretaries, have called on Justice John Dixon to dismiss the cases before a trial can begin, arguing the class actions are futile and have no real prospect of success.

“If you do not implement that program with proper regard to infection prevention and control then, as we plead, it’s reasonably foreseeable that the virus will escape, spread in the community and necessitate the imposition of restrictions on our businesses,” Ms Harris said.

The virus spread from returned travellers to, mostly, security guards working in the Rydges on Swanston and the Stamford Plaza in May and June last year, before seeding in the community.

Genomic and epidemiological sequencing linked 99 per cent of cases in Victoria’s second wave back to the hotels. More than 800 people died as months of tough restrictions caused widespread commercial shutdown and limited movement in the community.

The plaintiffs said infection prevention and control experts were not stationed at the hotels, the workers were not properly trained and there were failures in the use of protective gear and social distancing.

Barrister acting for the government, Rachel Doyle, SC, said her clients cannot be held liable for policy decisions on which the hotel quarantine program was based. The legal arguments were incoherent and indeterminate, she said.

The powers were exercised, Ms Doyle said, in the aid of public health and that obligation to all Victorians would be distorted if decision-makers had to prioritise commercial interests. 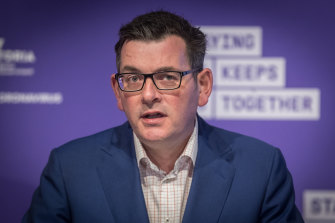 Ms Harris said the policy decision was to impose hotel quarantine, but the way the system was run involved operational decisions in which the government held a novel duty of care. Infection prevention and control, Ms Harris said, was one of the “nuts and bolts of its operation”.

This case also argues the government opted to use private security to guard the hotels and failed to deploy Defence Force troops and police.

John Richards, QC, said Premier Daniel Andrews admitted there were failures in the program when he announced an inquiry into the outbreaks in hotel quarantine in June last year.

The plaintiffs should be given a chance, he said, to litigate the claim and prove their case.

Justice Dixon will hand down his decision about whether the cases can proceed at a later date.