The cost of renting in London has fallen to its lowest level in nearly a decade, a survey has revealed.

A year after the coronavirus pandemic disrupted UK life, the average monthly rent for a house or flat in the capital is at the same level as it was in 2013.

Elsewhere, rental prices have sharply risen as a rise in working from home fueled an exodus from city living – with 22 per cent of tenants leaving the capital last year, according to estate agent Foxtons.

Prices plummeted by -9.4 per cent in London, according to real estate giant Zoopla’s quarterly rental market report, while rising by three per cent in the rest of the country.

The report found average rents in the City of London, Kensington and Chelsea, and Westminster, are at their lowest for a decade, with average Westminster rents running at £2,259 per calendar month – down from £2,617 in February last year. 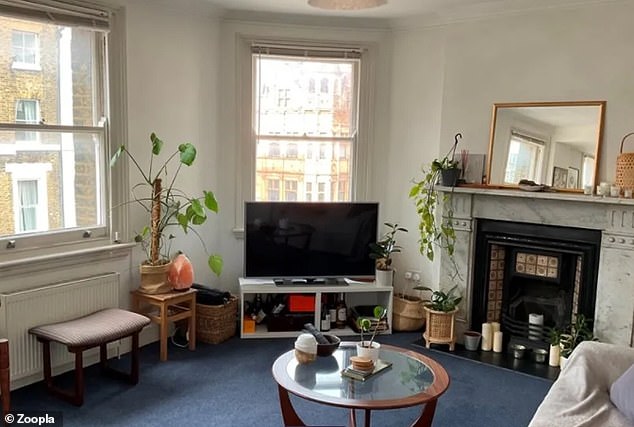 This two-bedroom flat in Islington, north London, was listed for £2,253 in February but saw a drop of 23 per cent when it was relisted at £1,733 at the end of March 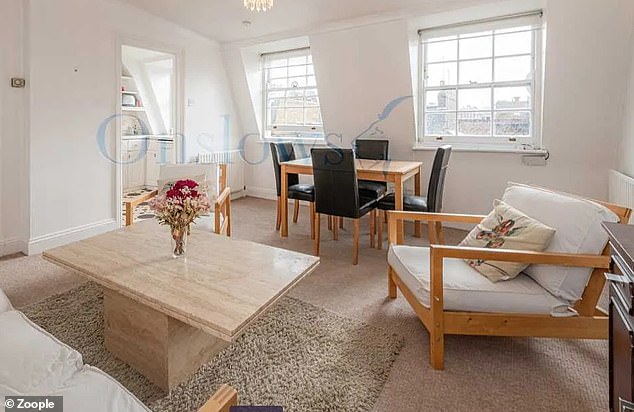 This two-bedroom flat in Marylebone was originally listed at £3,683 in February but its rent price was slashed by 26 per cent when it was relisted at £1,842 on April 13. Other rental costs in the area have fallen by 5 per cent on last year, according to Spareroom

Meanwhile, the average rent in London has fallen by -3 per cent, according to Spareroom data. The average cost of a rental property was £730 a month in April 2020, compared to £705 last month, its data suggested.

By contrast, UK rent costs outside of London have reached the highest level of growth in four and half years, according to Zoopla.

And Spareroom echoed the findings, suggesting rental costs have risen by one per cent since April last year – from £488 to £493 – outside London.

Its report said the impact of the pandemic on the housing market has been felt most acutely in city centres.

Central Edinburgh, Leeds, Manchester and London were at the forefront of the rental slowdown as offices remained closed.

A ‘softening’ in rents in city centres was caused by landlords switching short-term lets, such as AirBnbs, into longer term rental properties in popular city break destinations – as tourism was hit by multiple lockdowns.

Ed Phillips, chief sales officer, at Foxtons said: ‘The rental market trends identified by Zoopla closely mirror those that we’ve seen within the lettings market in 2020 across the Foxtons network. 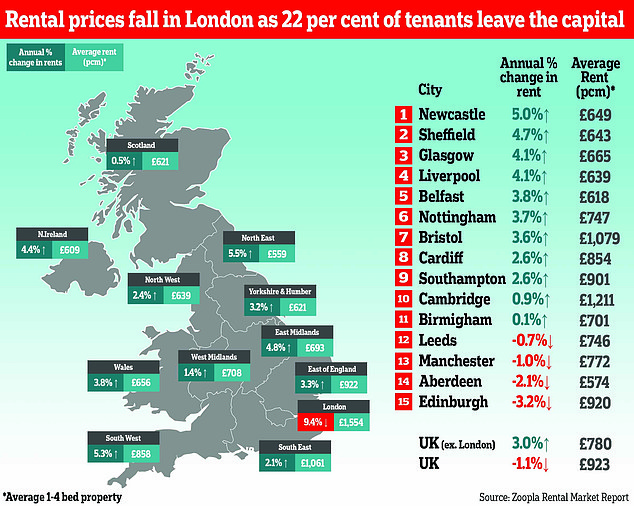 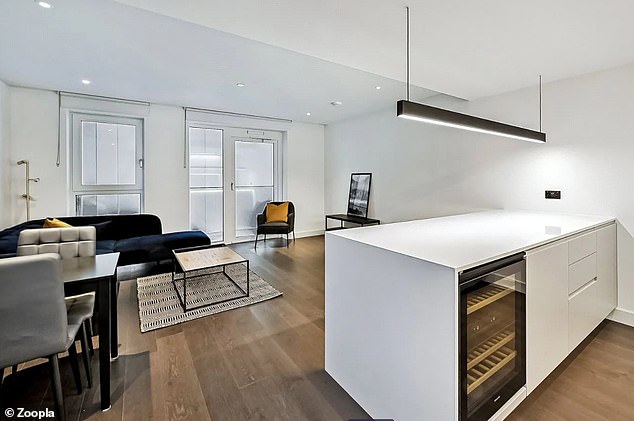 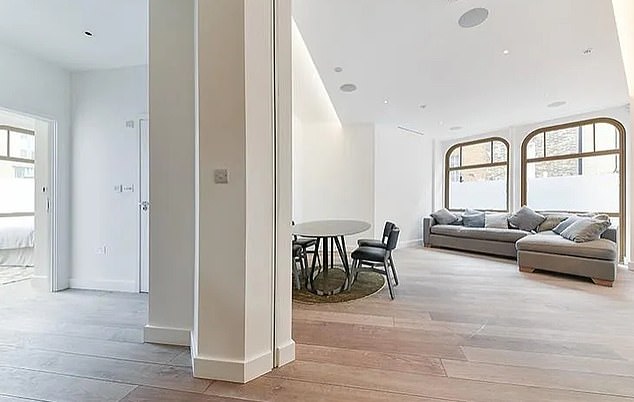 ‘With many residents leaving Central London, and the shifting priorities driving home-moving decisions, those that remained benefited from a greater freedom of choice, both in terms of where they could live and the range of properties available to them.

‘Our research found that 22 per cent of central London renters moved further out of London during 2020.

‘This resulting supply/demand shift has led to traditional renting hotspots such as Westminster and Chelsea becoming more affordable, and as such an opportunity that some people, especially the younger generations, have begun to exploit in early 2021, to access areas that were previously unattainable.’

But the downturn is starting to reverse as the economy opens up, with workers heading back into offices and leisure activities restarting.

Rental decline in London bottomed out in February of this year, down -10 per cent year on year, with overall London rents are now running at -9.4 per cent. 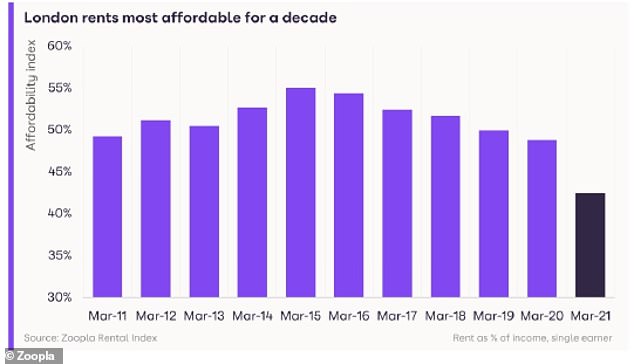 A year after the coronavirus pandemic disrupted UK life, the average monthly rent for a house or flat in the capital is at the same level as it was in 2013, Zoopla found

This means average monthly rents are now at the same level as they were in December 2013.

Many of London’s renters also appear to be looking for longer term moves with agents reporting an increased number of longer-than-average tenancies (in excess of 12 months) being agreed.

Meanwhile, rents are rising fastest in the North East (+5.5 per cent) and the South West (+5.3 per cent) year on year – the strongest rate of growth in a decade in these regions.

Despite this, the North East remains one of the most affordable regions in the country.

Prices in London could be rising again by the end of the year as the end of lockdown sees tenants return to the capital, according to Spareroom’s director Matt Hutchinson.

He told MailOnline: ‘It would be very easy to tell a story of the death of London but that’s exaggerated. London has been quiet as a result of an exceptional year. As tourism returns people will come back.’

But it is not yet known whether those currently living outside London will decide to stay where they are – with a potential ‘rebalancing’ of the population density in the UK still possible, according to Mr Hutchinson.

He added: ‘What we don’t know is if there will be a redrawing of the balance across the country if people feel they can work from wherever. 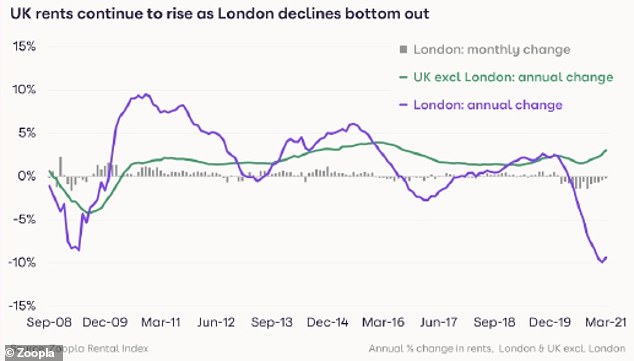 ‘There may be a rebalancing and the country may become less reliant on London. It was happening before but covid has accelerated it and it’d be interesting to see the next year.’

Across the country there is an issue with the supply of rental properties as during the pandemic many renters were unable or reluctant to exit the rental market and buy a property.

The number of properties purchased using a buy-to-let mortgage was 45 per cent lower in 2020 than in 2015.

The proportion of people searching for rental properties with gardens has also doubled since the pre-pandemic period last year.

Gráinne Gilmore, head of research at Zoopla, said: ‘Elevated levels of demand in the wider UK market, amid constrained supply, will continue to underpin rental growth this year.

‘The increased availability of mortgages for those with lower deposits may result in more people leaving the sector to buy their first home through 2021, but the wider economic uncertainty will limit this trend.

‘At the same time, the opening up of the economy and the slow return to ‘business as usual’ as the vaccine rolls out means demand will continue to build over the summer as more people move to rent their first property – although, as ever, this will be dependent on the economy opening up in line with the planned timetable.’

A spokesman for Spareroom said ‘rents are still down across the city comparing April 2021 with April 2020’, but demand is set to skyrocket.

They added: ‘We expect to see demand vs supply increase in Q2 (due to restrictions easing) but rents may take a little longer to recover as many landlords will be wary about putting rents up until they’re confident they will fill the rooms.’