Home » World News » Coronavirus Italy map – where have deaths and cases been confirmed?

ITALY, the epicenter of Europe's coronavirus outbreak, has quarantined 16million people in the country's north to contain the killer bug.

The country has 7,375 confirmed infections and 366 deaths of virus patients – one of the most severe outbreaks outside of China.

⚠️ Read our coronavirus live blog for the latest news and updates 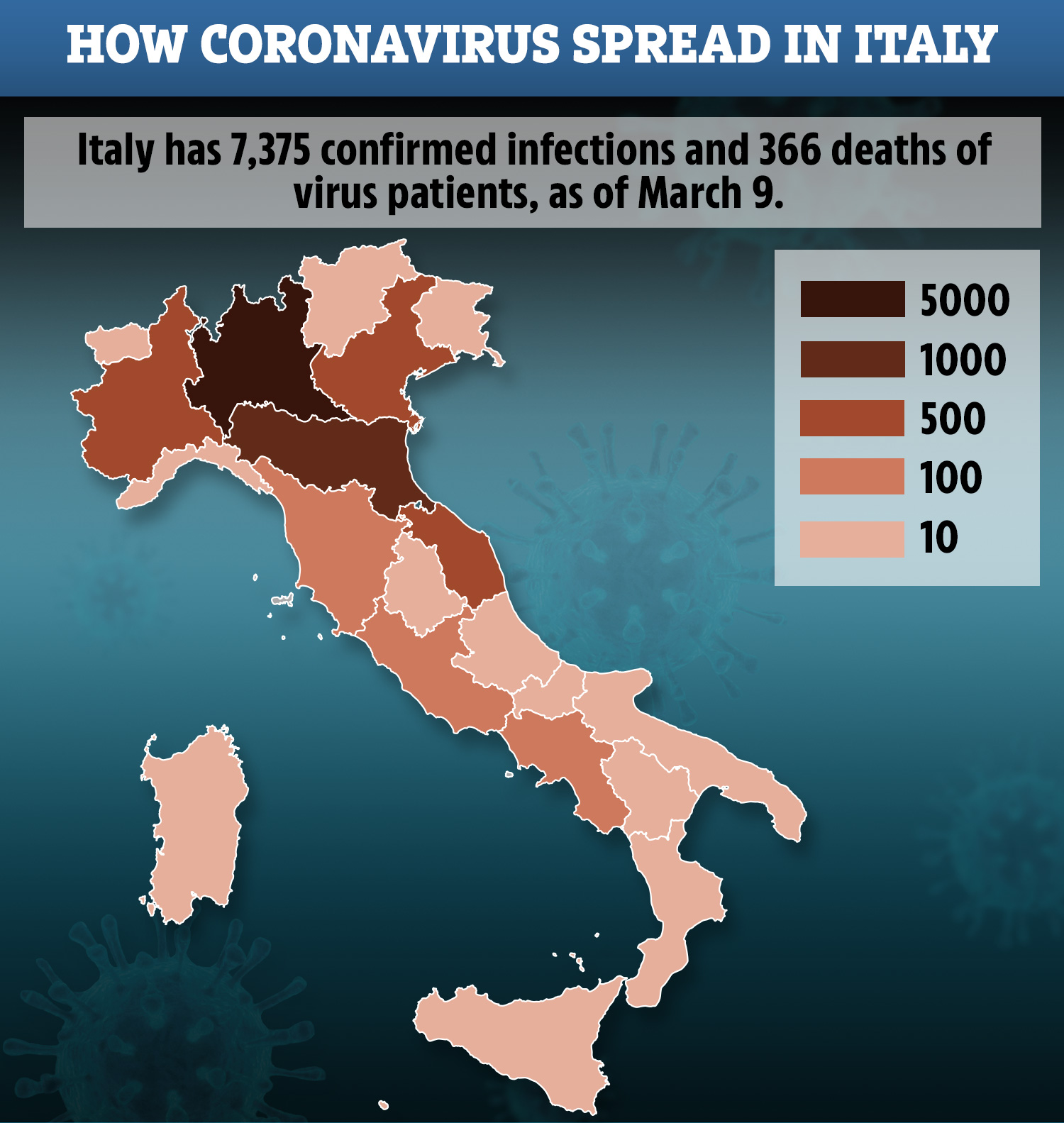 Where have cases of coronavirus been confirmed in Italy?

The government has imposed a lockdown on the northern region of Lombardy and parts of neighbouring Veneto to try to curb the spread of the virus in Italy, the hardest-hit country in Europe.

Lombardy – in Italy's north – has recorded the bulk of cases.

The region, whose capital is Milan, has also suffered the most deaths from the coronavirus, reports The Local.

So far, 366 people have died as a result of the killer bug, including three in Puglia, in Italy's south.

Veneto and Emilia-Romagna – whose capital is Bologna – have also seen spiralling cases. 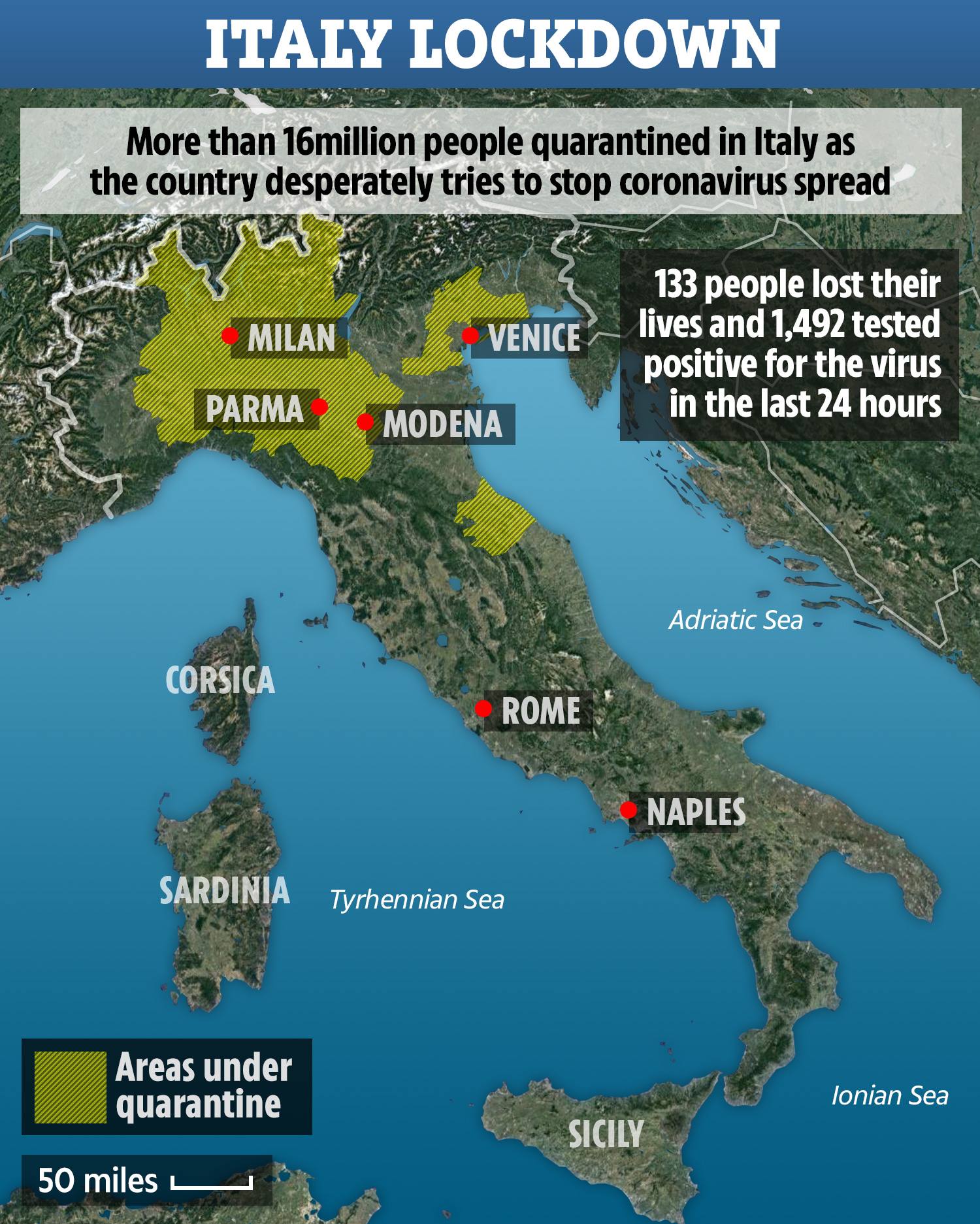 What does the quarantine mean?

The measures announced over the weekend were unprecedented in Italy's postwar history.

Authorities said they will close schools until April 3, suspend flights to and from Italy's "red quarantine zones" and limit gatherings.

Sports facilities, bars and restaurants were ordered to close or to restrict entry and maintain a distance of at least a metre between people on their premises.

International flights in and out of Milan's Malpensa airport have been suspended.

The unprecedented restrictions will impact some 16million people and were signed into law by Prime Minister Giuseppe Conte.

He promised "massive shock therapy" to lessen the impact of the outbreak, saying "we will not stop here".

The new measures state that people should not enter or leave Lombardy, Italy’s richest region, as well as 14 provinces in four other regions, including the cities of Venice, Modena, Parma, Piacenza, Reggio Emilia and Rimini.

Only people with proven, work-related reasons, or health problems will be able to move in and out of the exclusion zones.

Leave has been cancelled for health workers. 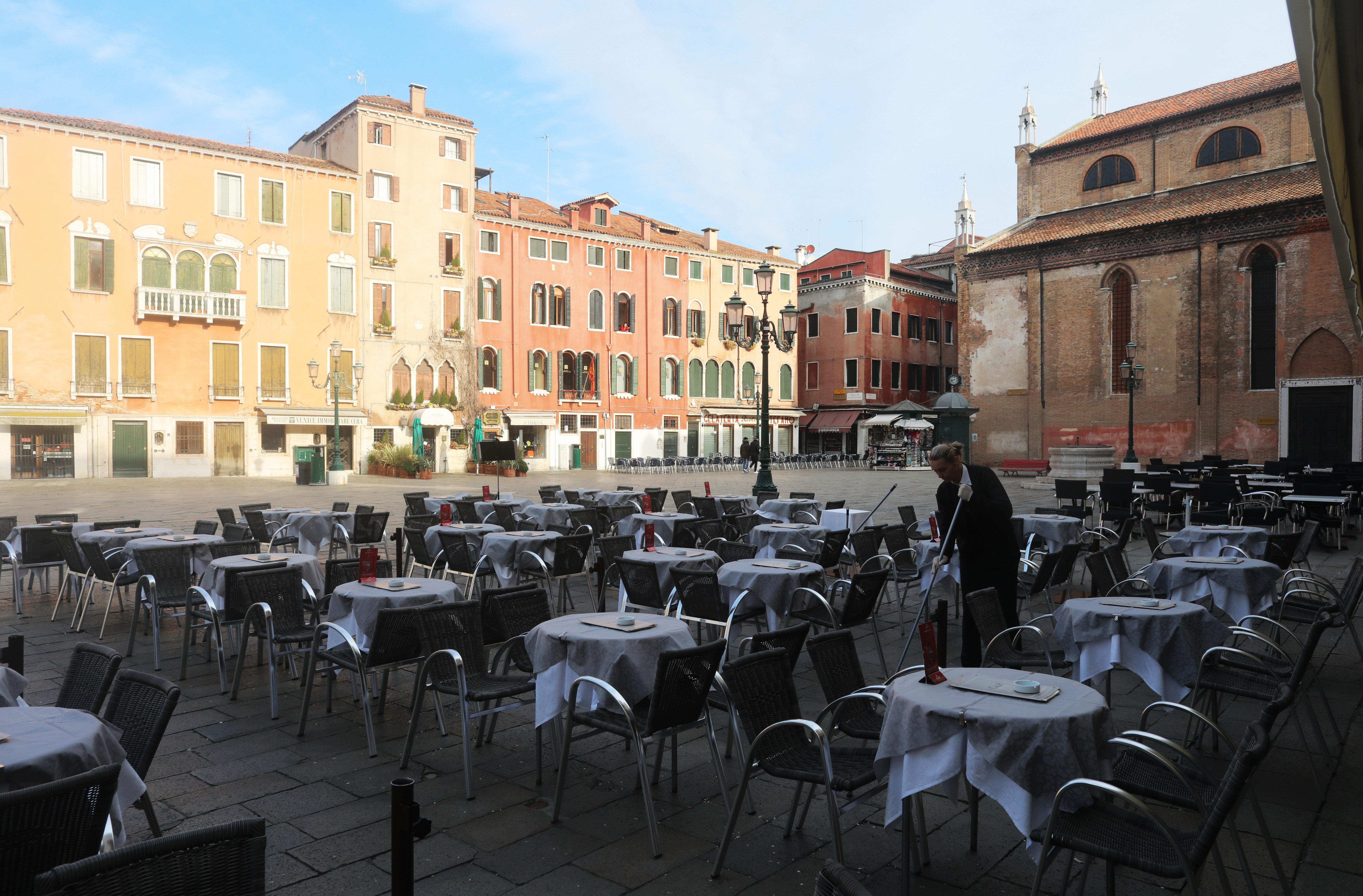 British holidaymakers have been warned to avoid ALL travel to northern Italy as coronavirus cases continue to soar and regions are being locked down.

The Foreign and Commonwealth Office (FCO) advises against all but essential travel to northern Italy.

Areas to avoid are:

British nationals are able to leave Italy without restriction.

BUT, the Government advice for anyone returning to the UK from locked-down areas in the last 14 days is to stay indoors and avoid contact with other people, even if they do not have symptoms of the coronavirus.

Anyone due to shortly visit quarantined locations on a package holiday should be offered alternative arrangements by their travel provider and a full refund if there are no suitable options.

If a tour operator refuses, customers may be entitled to compensation under the Package Travel and Linked Travel Arrangements 2018 regulations. 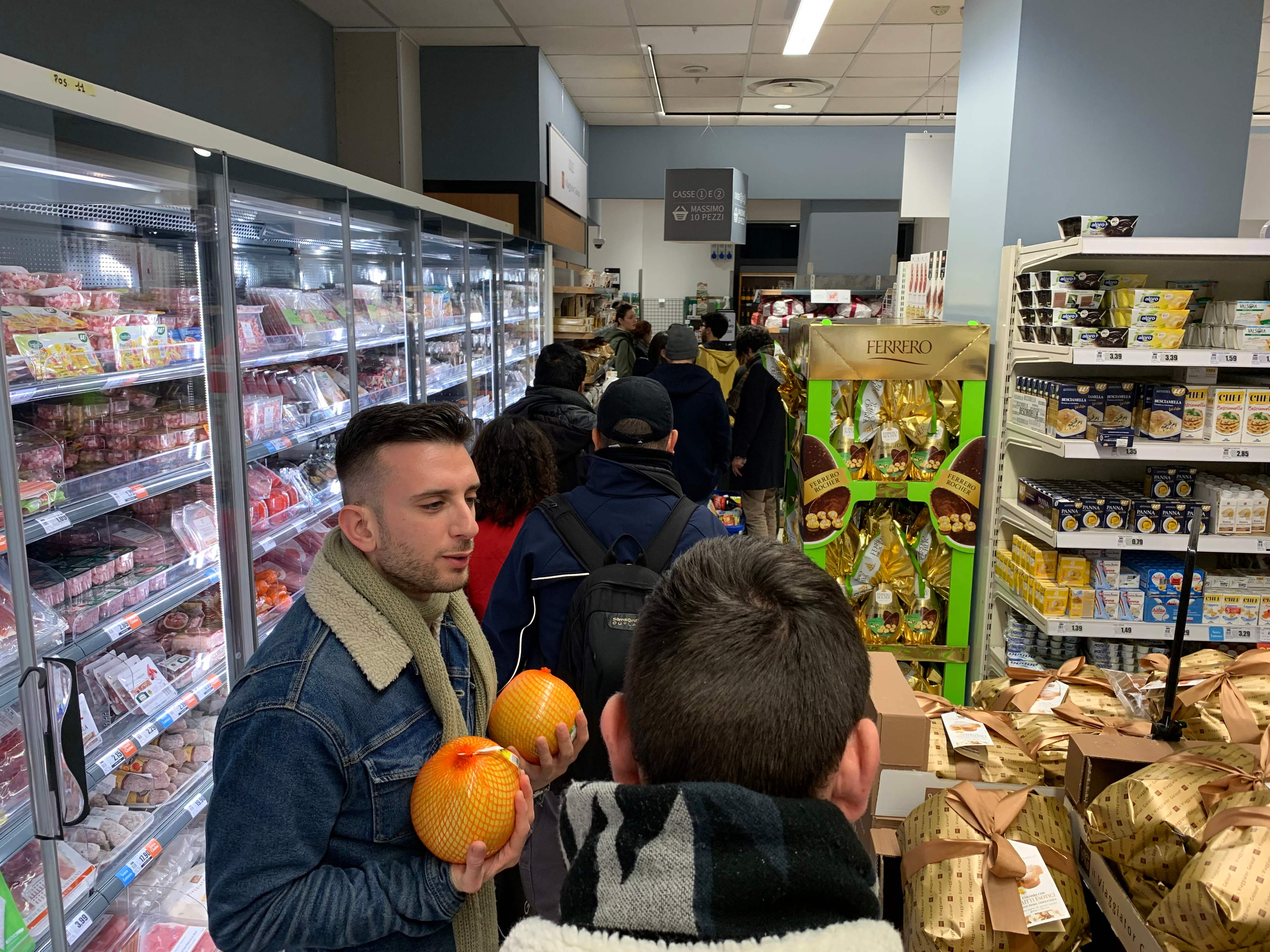 But Abta said "it is too early" to say that summer holidays cannot go ahead as planned.

"If you cancel early you may have to pay cancellation charges," it added.

Anyone who has booked flights or accommodation directly should contact their airline and accommodation provider to see what flexibility they are offering.

They should also check their travel insurance as it may cover non-refundable cancellation costs for trips to areas where the FCO is advising against all but essential travel. 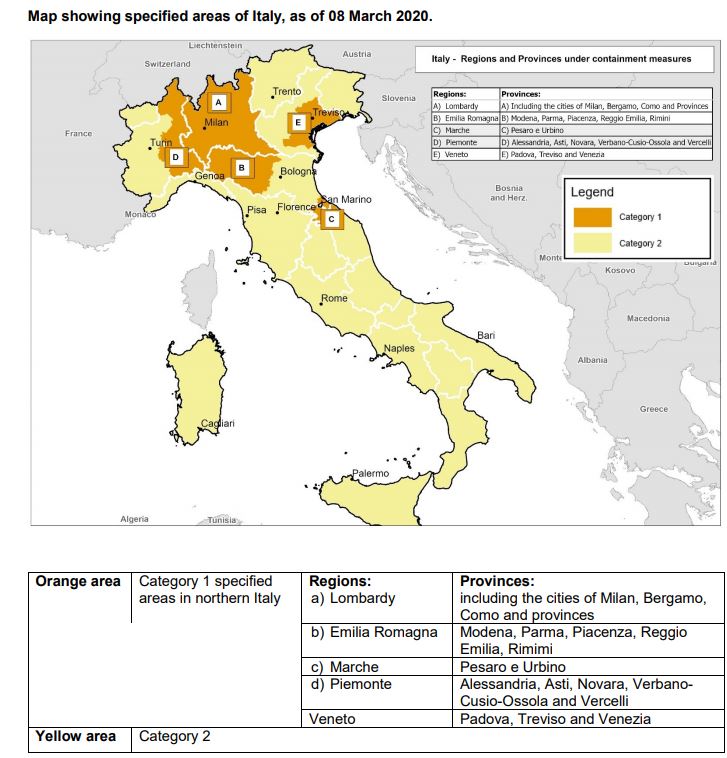 Why is the coronavirus so bad in Italy?

A more aggressive strain of the virus is believed to be spreading from Italy, known as the so-called 'L' variant.

Scientists believe that the S-type was probably the original strain that moved from animals to humans in Wuhan, China, and the second strain emerged shortly after that, with both versions now spreading.

The more aggressive appears to be the L-type which it is speculated is the type now prevalent in Italy.

Ravinder Kanda at Oxford Brookes University said: "There do appear to be two different strains."

She added: "[The L-type] might be more aggressive in transmitting itself, but we have no idea yet how these underlying genetic changes will relate to disease severity."

And Erik Volz at Imperial College London said: "I think it's a fact that there are two strains.

"It's normal for viruses to undergo evolution when they are transmitted to a new host." 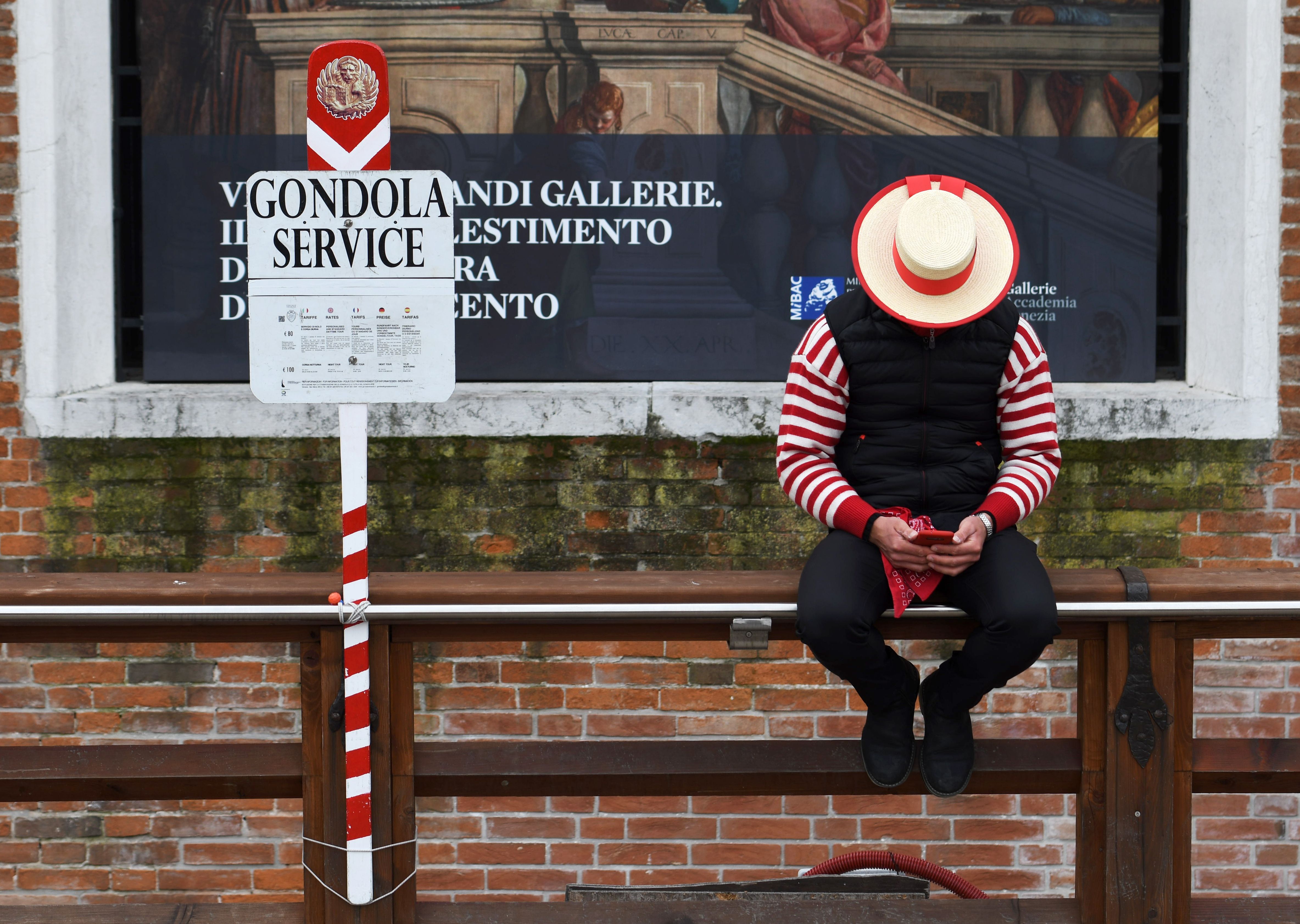