A drug used to treat hepatitis C is safe to use in coronavirus patients and could help them to recover, according to a study.

The medication danoprevir, sold as Ganovo, was given to 11 people with ‘moderate’ COVID-19 infections, in combination with the HIV drug ritonavir.

Scientists found it was safe and did not cause severe side effects, raising its prospects as a ‘promising therapeutic option’, they said.

If doctors decide to trial the medication it could become one of a variety of existing drugs which are being touted as possible therapies for people with the coronavirus.

Others include HIV-suppressing medicines, treatments for lupus or rheumatoid arthritis, and one that was developed to fight Ebola.

But people who rely on such medicines to keep them health in normal life fear that linking them to coronavirus will lead to shortages, as has happened in the US. 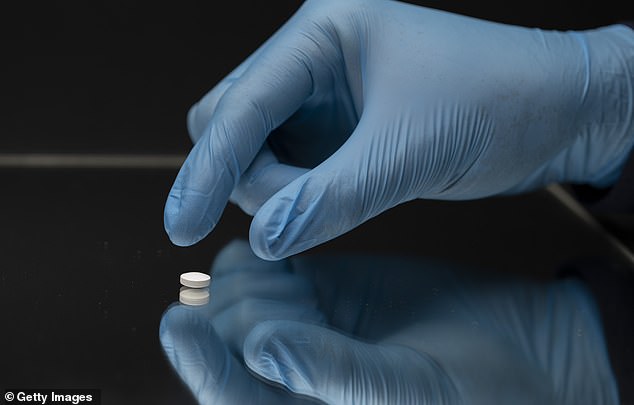 Researchers from a Chinese biotechnology company and a hospital in Jiangxi, China, published the results of their trial without them being reviewed by other scientists.

They had given 11 patients a combination of danoprevir and ritonavir for between four and 12 days.

All of them recovered and took around two days to produce a negative test result – the fastest negative test came just one day after treatment started and the last one eight days after.

They were discharged from hospital after their body temperatures returned to normal, their breathing improved, their lungs looked healthier in scans and they tested negative twice.

A vaccine that protects against tuberculosis (TB) and naturally improves a person’s immune system is being trialled on 4,000 healthcare workers in Australia to see if it can protect against coronavirus.

The Bacillus Calmette-Guérin (BCG) vaccine is used to give children immunity to TB — a bacterial infection — but it is known to have other benefits.

Trials have previously discovered people that receive the jab have improved immune responses and are better able to protect themselves from various infections.

These so-called off-target effects include enhanced protection against respiratory diseases,and have been recognised by the World Health Organization (WHO).

Scientists are now deploying the vaccine to thousands of people to see if it offers extra protection against SARS-CoV-2 and reduce COVID-19 symptom severity.

The trial will be led by Researchers at Melbourne’s Murdoch Children’s Research Institute and involve 4,000 health workers in various hospitals across the country.

To date, Australia has reported almost 3,000 cases and 13 deaths, with the global toll of infections approaching half a million.

Similar trials are being conducted in other countries including the Netherlands, Germany and the UK.

‘This trial will allow the vaccine’s effectiveness against COVID-19 symptoms to be properly tested, and may help save the lives of our heroic frontline healthcare workers.’

The study did not look at how well the drug worked, nor compare it to any other treatments, but assessed whether it was safe to take.

Ritonavir is being tested elsewhere, including an Oxford University trial in the UK, and some Chinese doctors claimed it had worked well for them.

The researchers, led by Dr Jinzi Wu, CEO of Ascletis Pharmaceuticals, which produces the drug, said: ‘Our findings suggest that repurposing danoprevir for COVID-19 is a promising therapeutic option’.

One potential remedy has been touted in the form of an anti-malarial drug called chloroquine, which is also used to treat rheumatoid arthritis and lupus.

But people who rely on the drug – who suffer those conditions – fear there will be a shortage if people are given hope that it will protect them from the coronavirus.

Just this week a man in the US died after drinking aquarium cleaner which contained another version of the deadly chemical.

One chloroquine drug, hydroxychloroquine, is used to control autoimmune conditions such as lupus.

If patients stop taking this medication their disease can flare up, which can be a life-threatening situation in itself and also raise the risk of getting severe symptoms of coronavirus.

India is currently the only country which manufactures a key ingredient for the drug approved for use in the UK.

However, it recently imposed export controls, meaning manufacturers for the UK cannot make more of the drug for this country.

‘About 90 per cent of the 50,000 lupus patients in the UK take this medication and, for them, there is no alternative which has the same effect.

‘We do not know what it does against COVID-19 but we do know that patients with lupus need this drug. Many patients who take it, with lupus and similar conditions, are already classified as at high or very high risk of severe illness from COVID-19 infection and any shortage could increase their vulnerability.’

Sue Farrington, chair of RAIRDA said: ‘This drug is used by tens of thousands of patients in the UK to control serious rheumatological conditions.

‘Whilst many of these are labelled as “rare” they still affect tens of thousands, meaning the health service would experience a significant burden if these patients lost the ability to control their condition.

‘We cannot allow this to be the straw that breaks the camel’s back.’