A Colorado police officer was killed Monday and another person was shot in a Denver suburb, according to local reports.

The Arvada Police Department said an officer was down following a shooting in the city’s Olde Town district just before 1 p.m. Authorities were securing an area around West 57th Avenue and Olde Wadsworth Boulevard, police said.

A CodeRED was issued telling people in the area to shelter in place and call 911 if they see suspicious activity, Fox affiliate KDVR-TV reported.

Fox News has reached out to the Arvada Police Department but has not heard back. The officer was taken to a hospital after the shooting.

Authorities said there were two possible suspects, the news station reported. Residents in the area were evacuated as authorities searched for possible explosives, which is standard protocol, the outlet reported. Nearby businesses were also asked to close early.

Olde Town is the city’s downtown district and home to various shops, galleries and restaurants, according to the city’s website. It’s listed on the National Register of Historic Places. 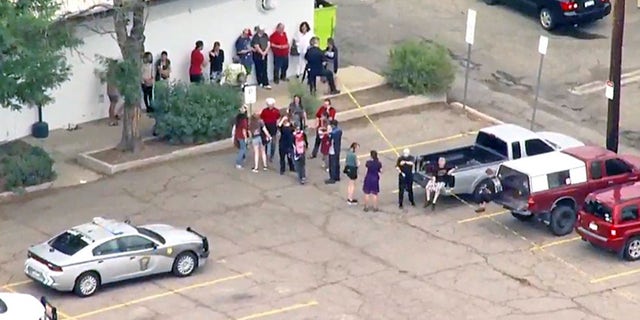 An Arvada, Colo., police officer was injured Monday and a suspect was shot, according to local reports.
(NewsNation )

A woman who lives nearby where the shooting occurred told the news station she heard three gunshots and saw police vehicles and ambulances respond.

The “large-scale” scene remains active, a police spokesperson said, according to reports.

The city tweeted that City Hall was closed for the remainder of the day and Monday night’s City Council meeting had been canceled. The shooting briefly forced a shutdown of a light rail station in the downtown area.

This is a developing story. Check back for updates. The Associated Press contributed to this report.