For the students of Carey Baptist Grammar, 2020 was an unwelcome case of life imitating art.

Carey’s VCE English students spent term one reading Station 11, a novel about life after most of the world’s population has been killed in a swine flu pandemic. 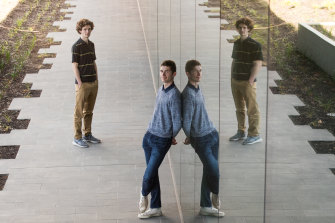 “We all started the year saying 'oh, this would never happen',” year 12 student Maddie Collins said.

Carey was the first school in Melbourne to be hit by the coronavirus.

On Friday, March 9, the independent school in Kew shut its doors after a teacher tested positive to COVID-19, in Victoria's first case of community transmission of the virus.

By the next school day Carey had flipped the switch to online learning for its 2500 students. It would be three months before they all returned to classes.

"Literally over the course of the long weekend and by Tuesday we’d flipped the whole school to an online delivery platform, which stayed in place pretty much for the whole year," principal Jonathan Walter said.

Students across Melbourne missed months of face-to-face learning this year, as the city went into lockdown to curb the spread of coronavirus, and missed out on many milestones such as graduation ceremonies and camps.

But when Carey switched to online learning the pandemic had not yet overtaken ordinary life for most Melburnians. 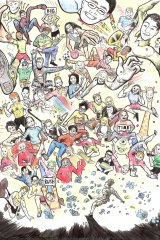 The grand prix was scheduled to run the following weekend and Chief Health Officer Brett Sutton was arguing against mass school closures as a preventative measure.

Year 12 student Otto Mezzetti recalls feeling pleased when he heard he’d have to stay home the next day.

“I thought, 'oh sick, a few days of school that we get to just spend at home where we don’t have to go into school, that’ll be fun',” he said.

“I thought it was a bit of a blessing and it would just go away – very naive.”

He and his twin brother Finn adapted to remote learning in contrasting ways.

Finn thrived in the distraction-free cocoon of home, shifting into a predictable routine of schoolwork, study, running and sleep.

"I almost liked the excuse that, you know, you can’t go out and do things that teenagers do, it was kind of good, because it meant that it was really easy to fall back into your studies," he said.

"I really missed that because when we went to remote learning it was all this stress about school and there was no real place that you could just release it, like at lunch time where you could talk to your friends about it."

Carey's VCE students returned to face-to-face learning while most other year levels stayed home at the start of term three, but within two weeks they were sent home again as case numbers spiralled.

In the end, the class of 2020 spent more time being taught at home than in classrooms.

On Wednesday, December 30, about 45,000 VCE students across the state will finally receive their results and their Australian Tertiary Admission Rank, putting a belated full stop on a drawn-out school year.

They will have another five days to alter their preferences for university.

Otto, who wants to study music at Monash, said he was feeling on edge about having to wait until after Christmas to get his results.

“It’s really stressful just trying to relax when you don’t know your ATAR yet, so you can’t put your plan in place for the future,” he said.

Finn is interested in a bachelor of space science at RMIT.

Maddie, who is tossing up between studying nursing or agriculture at the University of Melbourne’s Dookie campus, is also feeling jittery.

“It could ruin my New Year’s – I am kind of nervous – but I’m also interested to see if my exams were not as good as my SACs,” she said.

Along with tens of thousands of others, Carey’s VCE students have submitted applications for individual consideration of academic disadvantage.

But although students there spent more time learning remotely, the high-fee school was also better placed than most others to make the switch.

The school had already made significant progress in migrating its curriculum to an online platform and ultimately did in a weekend what it had planned to do over a few years.

“We brought all of that plan forward and just did it in an awful hurry,” Mr Walter said.

School staff including career counsellors will interrupt their Christmas break to support students on December 30, but Mr Walter said the day would be one of celebration.

"Our celebration will be around the fact that the whole cohort has made it through and … that every student has been able to get the support they needed to be able to find their pathway beyond the school."