Cineworld is planning to reopen 127 cinemas in May after easing of Covid restrictions with socially distanced seating, reduced ticketing and staggered start times

Cineworld has today announced it will reopen in May in line with the government’s roadmap out of lockdown.

The chain’s 127 outlets across the UK are set to open again, after closing towards the end of last year.

Cinemas reopened last July after the first national lockdown, but in October the troubled chain mothballed all 600 of its theatres on both sides of the Atlantic, affecting some 5,500 employees.

More than 5,000 of Cineworld’s staff are currently at home on furlough, and it was forced to take out a £324million loan in November to pay the bills.

Cineworld will have to abide by Covid-secure measures to keep viewers safe when it reopens, which are likely to include socially distancing seating plans and staggered film start times. 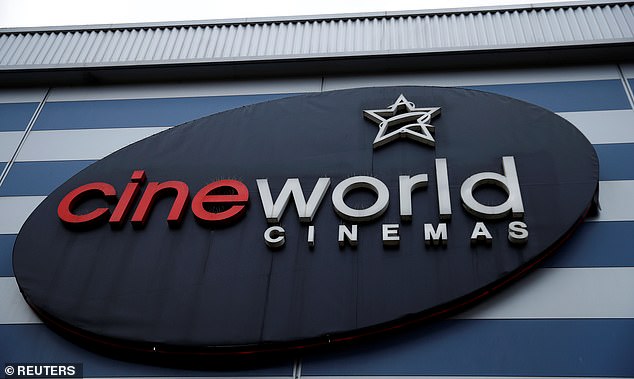 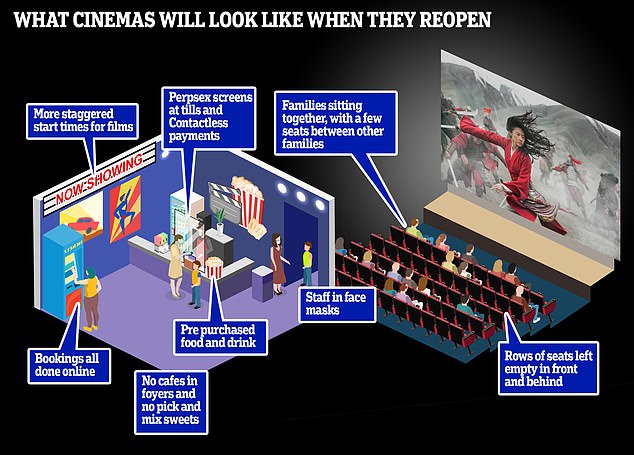 As Britons are let back in to cinemas, a string of social distancing measures will likely make going to the pictures a quieter, hungrier and more time-consuming affair

What cinema chains have been affected by the covid pandemic?

CINEWORLD: The chain temporarily closed 600 theatres on both sides of the Atlantic, including all 127 in the UK last October

VUE: Vue said it was ‘being forced to look at all options’ to survive, including temporary closures

ODEON: Around a quarter of its 120 venues moved to a weekend-only model last October, before the third national lockdown

From March 29, the Rule of Six will return for outdoor gatherings, with the Government changing advice from Stay at Home to Stay Local, and a public transport lifted.

Next month, should Covid-19 rates continue to fall, non-essential retail and hairdressers will reopen on April 12, along with restaurants and pubs to outdoor customers.

May 17 will see hotel, cinemas and play areas reopen, with the Rule of Six dropped out doors, along with the possibility of international travel bans being lifted.

June 21 could see all legal limits on social contacts go, along with all restrictions on large events, just in time for the summer.

Cineworld boss Mooky Greidinger will be hoping for a strong return to cinemas, having persuaded shareholders to approve plans that could see him net a £65 million bonus in three years’ time if certain targets are hit.

This comes after the chain lost more than £1.3billion globally amid the pandemic – compared to a profit of some £220million million in 2019.

The bonus – which is part of a pot for executives worth up to £208 million – had been described as ‘excessive’ after the company put 5,000 staff in the UK on to the Government’s furlough scheme.

Corporate governance experts questioned why the chief executive needs the bonus ‘incentive’ to keep working at the business, considering his family already has a 20 per cent stake in it. 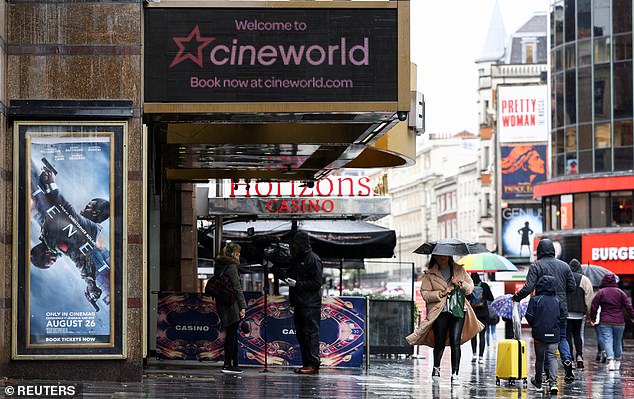 More than 5,000 of Cineworld’s staff are currently at home on furlough, and it was forced to take out a £324million loan in November to pay the bills.

Bosses also revealed they will open cinemas in the US under its Regal brand from April 2, following six months of closure.

A deal has also been struck with Warner Bros that gives the cinema chain, which also owns the Picturehouse franchise, exclusive rights to show films over streaming services.

The phased reopening in the US will start with a limited number of cinemas opening for Godzilla vs. Kong on April 2, followed by screenings of Mortal Kombat from April 16.

Chief executive Mooky Greidinger said: ‘We have long-awaited this moment when we can welcome audiences back to our Regal theatres and restore our essential role within the communities we serve.

‘With capacity restrictions expanding to 50% or more across most US states, we will be able to operate profitably in our biggest markets.

‘We will also be monitoring developments closely in the UK and across Europe as we set to gradually reopen across the world in line with local government guidance.’

The boss also revealed that Cineworld has reached an agreement with Warner Bros to show the studio’s films exclusively in its cinemas 31 days prior to them being made available on premium video on demand (PVOD) platforms for streaming at home.

An extended window of 45 days for films that open to an agreed-upon box office threshold has also been reached, it added.

Cinema chains have been fearful that, with the pandemic seeing studios turn to online platforms, it could set a longer term trend on new releases going straight into homes via PVOD services.

But Mr Greidinger said: ‘This agreement shows the studio’s commitment to the theatrical business and we see this agreement as an important milestone in our 100-year relationship with Warner Bros.’