The original dossier detailing a rape allegation against former attorney-general Christian Porter has been made publicly available for the first time, including allegedly contemporaneous diary notes written by the woman who accused him shortly before taking her own life last year.

The 31-page document, which had previously been circulated among politicians and journalists, details in the woman’s own words her account of an alleged incident in 1988 involving Mr Porter in Sydney while they were both teenagers. 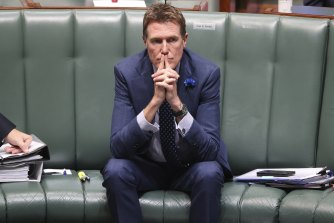 Documents regarding allegations made against Christian Porter have been made public. Credit:Alex Ellinghausen

The woman, known only as Kate, alleges in the document that she was raped three times by Mr Porter in the early hours of January 10, 1988, in her room at the University of Sydney Women’s College where they had walked after dancing at the Hard Rock Cafe in Kings Cross. There had earlier been a formal dinner for the World Universities’ Debating Championships.

Mr Porter has strenuously denied the incident occurred. He brought a defamation action against the ABC for reporting on the existence of the dossier, which was sent to politicians including Penny Wong, Scott Morrison and Sarah Hanson-Young.

The defamation case has since been settled and will be discontinued.

Parts of the dossier have been published previously, but the full document has not been made publicly available. Its release, with a trove of other Federal Court documents late on Thursday, came on the first anniversary of the day Kate took her own life.

The first alleged incident Kate said occurred was after she was propositioned for a “pearl necklace” and Mr Porter complained he could not be left with “blue balls”, forcing her to perform oral sex, which was the first allegation of rape.

After vomiting on her own dress, she says Mr Porter offered to “clean” her, in a bath or a shower at the college, and he washed her before dressing her in her nightie and underpants. She said they fell asleep and alleges she woke up to Mr Porter anally raping her while she was lying face-down and naked.

She alleges he ejaculated, which she described as “violently shocking”, and he anally raped her a second time. She said she was too ashamed to report it the next day. Some of the details contained in the document are too graphic for The Herald and The Age to publish.

Other documents released on Thursday include a lengthy transcript and video of an ABC interview with Kate’s friend Jo Dyer. Ms Dyer, a festival director who knew Kate in the 1980s, detailed the reasons why she believed the allegations her friend made. 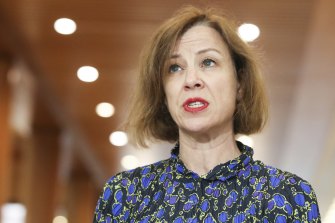 The documents included an interview with Jo Dyer, a friend of the woman who made the accusation. Credit:Alex Ellinghausen

“There are a number of reasons why I thought Kate was telling the truth. First and foremost was the story that she told was so clear and so consistent and so detailed,” Ms Dyer said in the interview.

“Secondly, really, the incident as she described … the acts that she described were not something that a 16-year-old virgin would consent to.”

Ms Dyer said in the full interview that Kate told her “a level of sinister detail”. This included an account of being anally raped twice, which was “enormously painful for obvious reasons”.

“There was, as she described it, this mantra that C [Mr Porter] was repeating – this was just a bad dream, you’ll be fine, everything will be OK. Again, extraordinary detail in the story. And an extraordinary thing to say.”

Kate took her own life in June last year, before she had made a formal police statement. In March, a NSW Police spokesperson said there was “insufficient admissible evidence to proceed” with an investigation in the matter.

Also among the documents released by the court were a series of text messages between Ms Dyer and ABC presenter Annabel Crabb, where Ms Crabb wrote that the former attorney-general was a “strange dude” and Kate would be moved to know that her friends were seeking justice for her.

In the messages, starting shortly after Kate took her own life, Ms Crabb wrote that she was “completely poleaxed … even though I hadn’t seen her for so long and didn’t know her all that well to begin with”.

“It’s really coalescing with the stories of those [former High Court Justice Dyson] Heydon women just fading away out of the law… leaves me with such a boiling sense of rage and grief,” Ms Crabb said.

“I’m glad she at least managed to talk to a lot of people, some never get that. What a strange dude CP is. And how amazingly arrogant to think you can mistreat people and get away with it for ever.”

Ms Dyer responded that Kate was a “shining star” and it was “devastating” that her life was “very troubled for so long”.

“Regardless of whether it’s exclusively or only collaterally because of CP’s entitled arseholedom, it similarly fills me with rage. She deserved such a different life,” Ms Dyer wrote.

The documents had been tendered as part of a court case where Ms Dyer stopped high-profile silk Sue Chrysanthou, SC, from representing Mr Porter in his defamation case against the ABC.

Ms Dyer successfully argued Ms Chrysanthou was privy to confidential information about Kate and Mr Porter because the barrister gave her free legal advice in relation to an article in The Australian that mentioned Ms Dyer.

At a press conference in Perth earlier this year, Mr Porter said: “I did not sleep with the victim. We didn’t have anything of that nature happen between us … I can say to you all it didn’t happen.”

As part of his recent settlement deal with the ABC, Mr Porter attempted to file a consent order removing the ABC’s defence from the court file.

But Justice Jayne Jagot refused to remove it and has allowed The Sydney Morning Herald, The Age and News Corp Australia to make submissions that the defence should be released to the public.

The details that have now been disclosed might have forever remained suppressed if Ms Chrysanthou had surrendered her brief to act for Mr Porter and avoided Jo Dyer’s litigation.