Christchurch: Hamimah Tuyan, who was widowed in last year's Christchurch mosque shootings, has developed a coping mechanism with her sons when her heart longs for her husband, Zekeriya.

"My sons and I have this thing. They say, 'If we miss Baba, we will just hug you tightly. Because you are him and he is you'," she says. 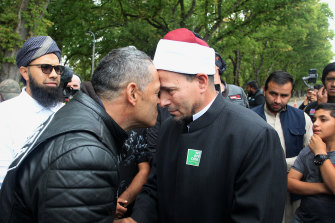 Imam Gamal Fouda (right) greets a member of the Tu Tangata Iwi Tapu Motorcycle Club prior to them performing a haka in support of the Christchurch Muslim community at the Masjid An-Nur mosque on on Sunday.Credit:Getty Images

"So I respond saying 'when I miss him I will hug you too because you is him and he is you'.

"I don't know what I have done to be blessed with them."

Dr Tuyan returned to Christchurch this week for just the second time since the attack, to mark the first anniversary since 51 worshippers were killed in a mass shooting.

A planned national memorial event was cancelled due to fears it might spread the new coronavirus. 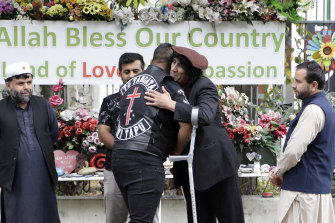 Survivor Taj Mohammed Kamran, second from right, welcomes a member of the Tu Tangata motorcycle club to the Al Noor mosque in Christchurch.Credit:AP

Outside the Al Noor mosque, dozens of leather-clad bikers from the Tu Tangata club performed a traditional Maori haka. They were welcomed by mosque imam Gamal Fouda, who said people of all beliefs and cultures were stopping to pay their respects, and they were all united as New Zealanders.

One of those who survived the shooting at the Linwood mosque was Mazharuddin Syed Ahmed, who said that marking anniversaries was not typically a Muslim tradition but they were doing it so the wider community could grieve and remember. He said the shootings had provoked an outpouring of love and compassion.

"Of course, we lost our loved friends, family, people and community," he said. "But we are also seeing so much good has come out of it. So looking at the positive part of that. Today, it is such a privilege to be in this country." 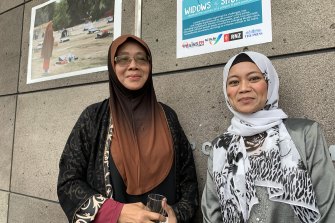 Friends Jumayah Jones, of Al Noor mosque, and Hamimah Tuyan, who was widowed in last year’s terrorist attack, reunite at Christchurch Art Gallery one year after the shootings in Christchurch.Credit:AAP

Dr Tuyan moved to New Zealand with her family in 2013 after winning a scholarship to complete a PhD in speech and language therapy.

She left Christchurch after finishing her studies in late 2018, hopeful of reuniting as a family in June last year.

Dr Tuyan is one of 31 women widowed by the attack, New Zealand's worst mass shooting.

She speaks with remarkable grace when she remembers her husband.

"He was a principled man, a hardworking man. He was quiet but humble.

"He never had a bad thought for anybody. If he hears anybody saying a bad word about anybody he would signal to me to 'sssh'.

Like many, Dr Tuyan was left searching for meaning in the aftermath of the attacks.

She found it in the very thing that made her family a target – her faith.

"Islam plays a very big special role in this," she said.

"We have a lot of stories and examples in the Koran about how more important people have been able to overcome their sadness and their depression and far worse experiences and situations than this.

"That has given me a lot of healing … [helping] me to change our mindset and not to be bogged down by sadness.

Dr Tuyan has also found strength in telling her story.

She is one-of-four women who have been profiled in a documentary series, launched this month, called Widows of Shuhada.

She was also to address the national remembrance service on Sunday, which was unfortunately cancelled due to fears it could spread coronavirus.

Dr Tuyan said she hoped to issue a challenge to New Zealanders to understand Islam and people of faith.

"It's our responsibility. Every one of us will be accountable for this if we don't learn from this experience and understand," she said.

"If we do not want 15th March to happen again we all need to read up and learn about each other.

"To see that there are a lot of similarities rather than differences.

"We all have a role to play in calling out hate speech whether its coming from politicians or the neighbour.

"We need to challenge and seek verification from whatever we hear about Islam and Muslims."

She also has a challenge for her own community.

"I'm inviting our Muslim community to play a proactive role. Yes you hide, you isolate, you try to heal," she said.

"But you still have to come out and do your job … to extend the hand to other people in the community."

Dr Tuyan's message echoes a call from the imams of the two mosques targeted in last year's attack, Al Noor mosque and Linwood Islamic Centre, which they have called the 'Christchurch Invitation'.

The Christchurch Invitation asks New Zealanders to make three acts – feeding the hungry, reconnecting with others, and spreading peace – the legacy of last year's attack.

"Last year we witnessed beautiful intentions and actions when people saw past labels and differences, saw other people as human beings, and came together after that dreadful shooting," imam Gamal Fouda and imam Alabi Later Zikrullah said in a shared statement.

"This is an invitation to remember what we saw, to recognise that this was us, and to keep those intentions alive.

"We want people to remember the loss – forgetting helps no-one – but we want to remind them of the hope.

"And there is hope."