Chelsea stars Mason Mount, Kai Havertz and Jorginho have today been spotted filming an advert for sponsors Trivago, just days after the travel firm refused calls to cut ties with the London club.

The hotel price comparison site stood by the Premier League side after its Russian-Israeli owner Roman Abramovich was sanctioned by the UK Government over his alleged links to Vladimir Putin.

Now Chelsea appear to be repaying the faith, by sending three of their star players to film an advert with the German firm.

Pictures show the star trio in Chelsea tracksuits standing at a hotel desk with small suitcases during a photoshoot in London.

Other pictures show England ace Mount dancing in a training kit emblazoned with a Trivago logo.

Kai Havertz, who scored Chelsea’s late winner against Newcastle at the weekend, can also be seen walking down the street in a hooded jumper with a cameraman behind him. 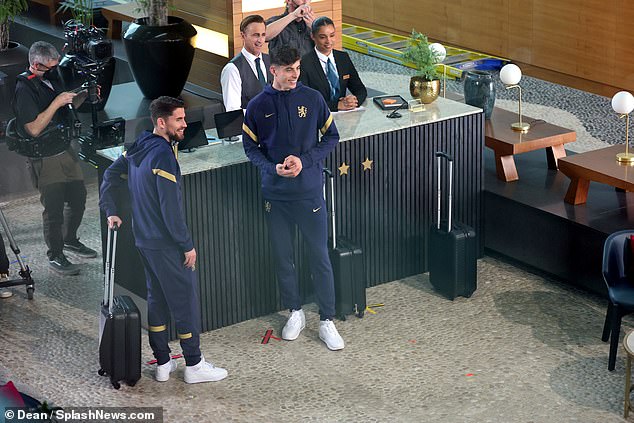 Chelsea stars Mason Mount, Kai Havertz and Jorginho have today been spotted filming an advert for sponsors Trivago, just days after the travel firm refused to cut ties with the London club 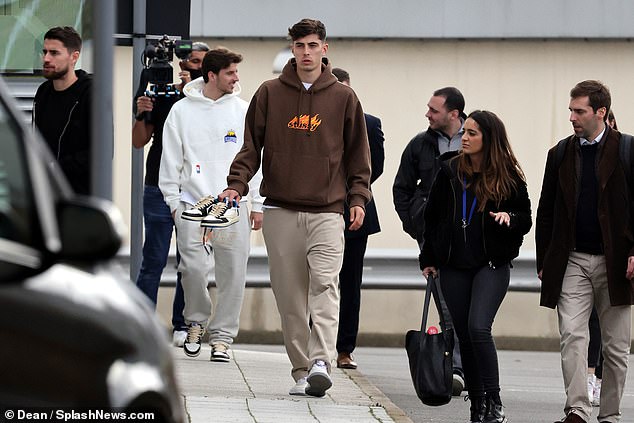 Chelsea appear to be repaying the faith, by sending three of their star players to film a plug for the travel firm.  Pictured: Kai Havertz and Mason mount while filming an advert for Trivago 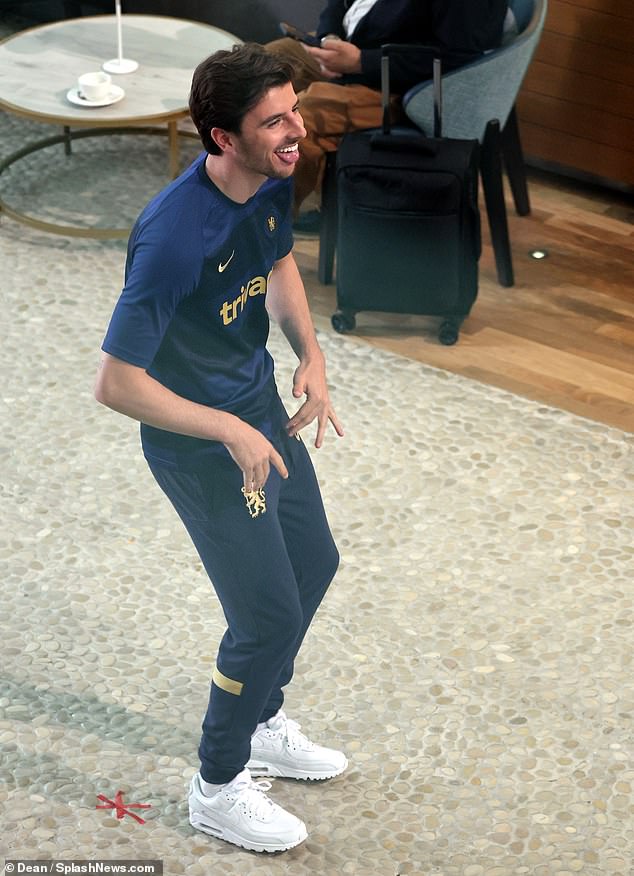 Pictures show the trio in Chelsea tracksuits standing at a hotel desk with small suitcases. Other photographs appear to show England ace Mount dancing in a training kit emblazoned with a Trivago logo

The German travel firm only signed the ‘multi-year’ deal with Chelsea in May last year.

The size of the contract has not been made public, though the club’s three-year deal with previous sponsors Carabao is believed to have been in the region of £10million.

Chelsea’s kit sponsor, Three, announced last week that it had suspended its deal with the club, thought to be worth around £40million per year.

The mobile phone firm are understood to still be in discussions about the removal of the logo from strips long-term.

South Korean car manufacturer Hyundai, whose logo featured on the sleeze of Chelsea kits, followed suit and announced it had suspended its deal with the club. 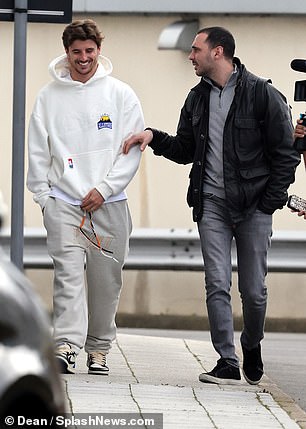 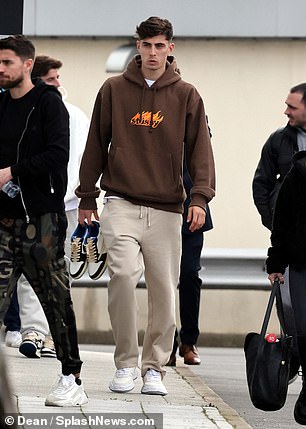 While kit sponsors Three and Hyundai ‘suspended’ their deal with the Premier League side, Trivago, who are the club’s training wear sponsors, agreed to keep their deal with the Champions League winners active. The travel firm only signed the ‘multi-year’ deal with Chelsea in May last year 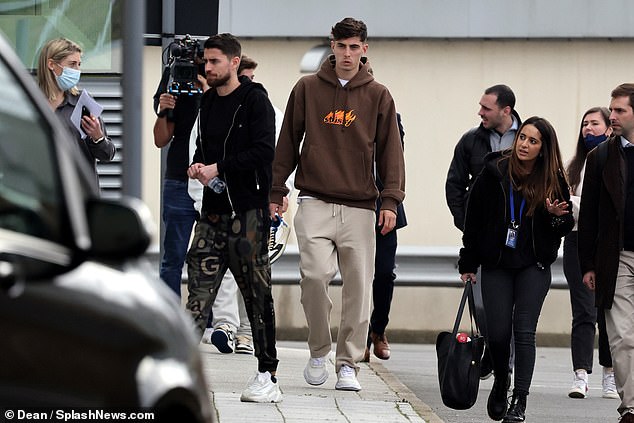 Chelsea’s Sunday goalscorer Kai Havertz with Jorginho, who provided the assist, during filming for an advert with Trivago 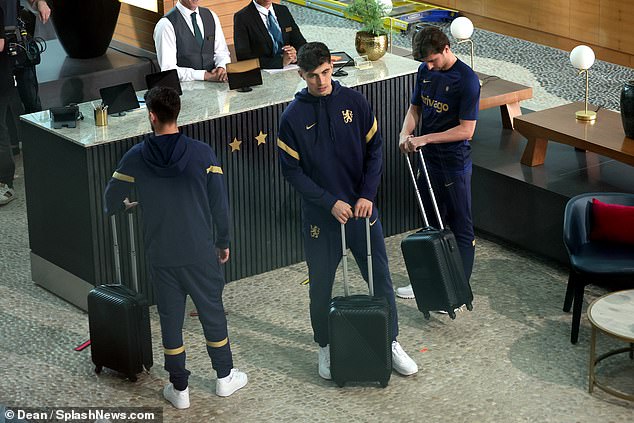 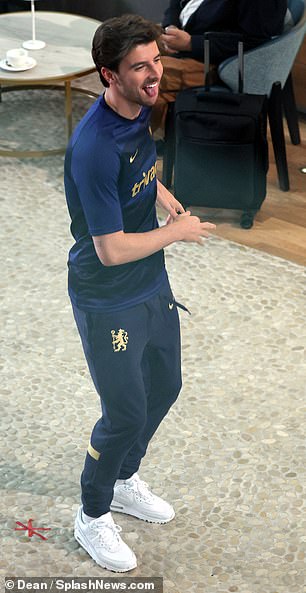 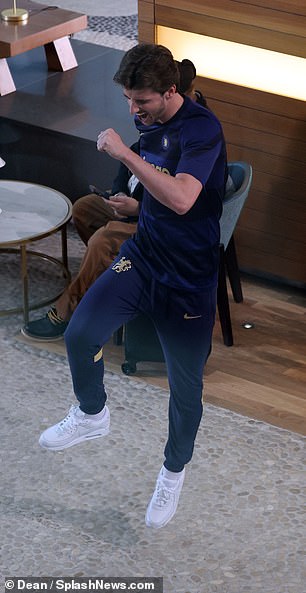 Chelsea’s kit sponsor, Three, announced last week that it had suspended its deal with the club, thought to be worth around £40million per year. The mobile phone firm are understood to still be in discussions about the removal of the logo from strips long-term. Pictured: Mason Mount during filming for an advert with Trivago

A statement released by Hyundai said: ‘Hyundai has become one of the strongest partners in football over the years and the company supports the sport to be a force for good.

‘Through our partnership with Chelsea FC, we are proud supporters of the players, the fans and grassroots football.

‘However, in the current circumstances, we have taken the decision to suspend our marketing and communication activities with the Club until further notice.’

Hyundai have been Chelsea’s ‘official global automotive partner’ since 2018.

Kit manufacturers Nike however have joined Trivago in sticking by Chelsea. The sports retail giant have a 15-year kit sponsorship deal worth £900million.

The announcements by Three and Hyundai came after Abramovich – whose purported links to Russia President Vladimir Putin landed him on the sanctions list – had his British assets sanctioned under terms laid out and announced by Prime Minister Boris Johnson on Thursday morning.

Brands worldwide have been desperate to distance themselves from Russia following Putin’s brutal invasion of Ukraine, which began over two weeks ago. 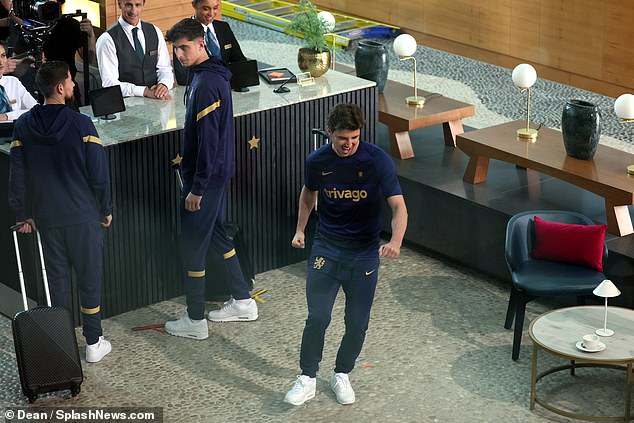 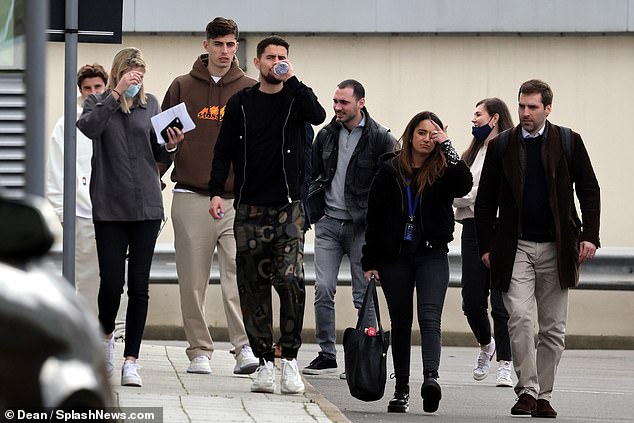 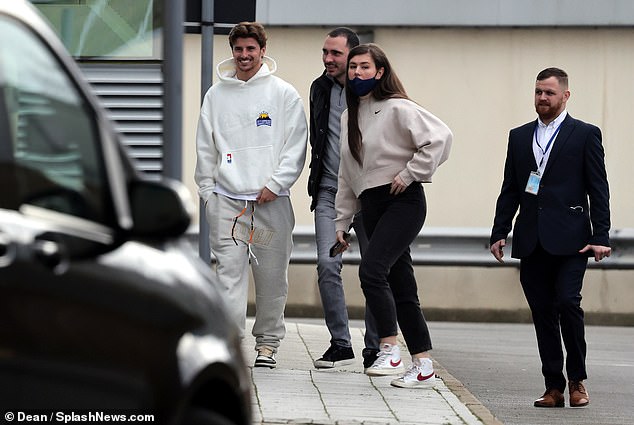 The situation in Ukraine is deteriorating daily with Putin accused of war crimes after his forces have consistently bombed cities, hitting civilian targets, including a children’s hospital.

However, Trivago announced on Thursday they would continue as training kit sponsors, despite other partners walking away in the wake of the sanctions against Abramovich.

On their deal with Chelsea, Trivago said: ‘As a global travel brand, we believe in connecting and bringing people together.

‘These are values shared by Chelsea, an institution now 117 years old with a tradition so vitally important to its fans and communities and that is why we decided to partner with the club. 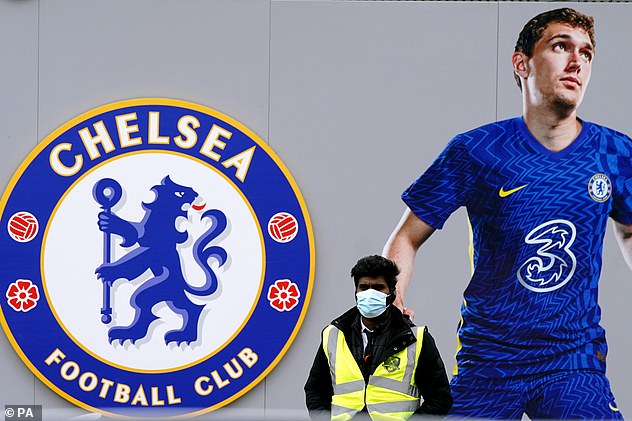 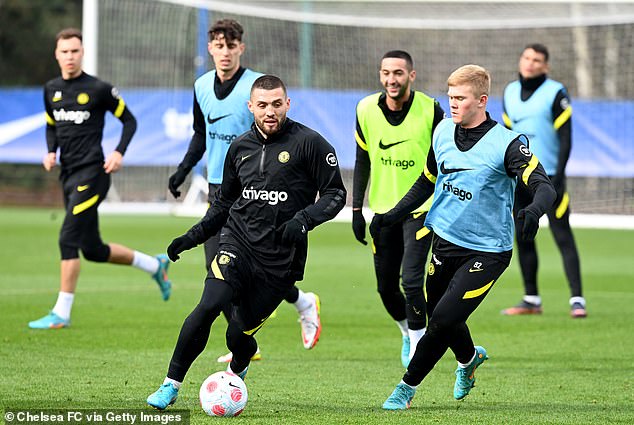 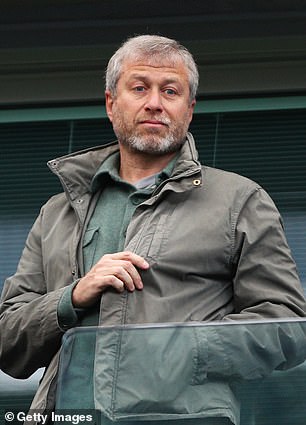 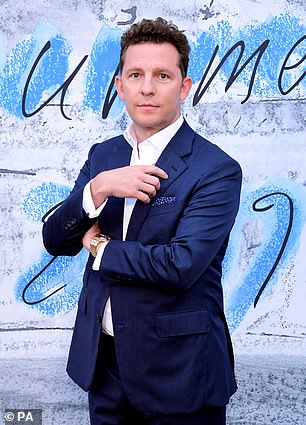 Abramovich (pictured left) was earlier disqualified as a director of Chelsea after being sanctioned by the government. British tycoon Nick Candy (pictured right) has confirmed that he is still interested in taking over Chelsea 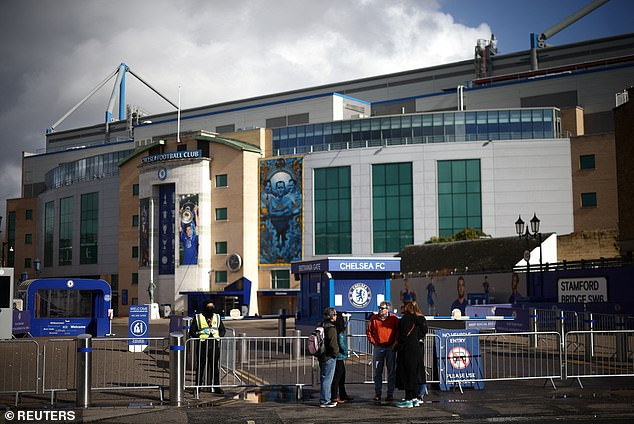 ‘The uncertainty over the ownership situation of Chelsea has been challenging. It is important to us to continue supporting the club, the fans and community. We are looking forward to a transition of ownership as soon as possible.’

Who are Chelsea’s sponsors and what have they said?

Three – have suspended their £40million kit deal with the club

Zapp – have suspended their marketing deal with Chelsea

Last year, Chelsea made £154million from commercial deals despite the coronavirus pandemic. In 2019, before Covid struck, the club earned £200million in sponsorship.

Abramovich was earlier disqualified as a director of Chelsea and the government have begun negotiations with the oligarch’s advisers over the terms of the sale, which Downing Street is eager to push through as quickly as possible.

A Premier League statement read: ‘Following the imposition of sanctions by the UK Government, the Premier League Board has disqualified Roman Abramovich as a Director of Chelsea Football Club.

‘The Board’s decision does not impact on the club’s ability to train and play its fixtures, as set out under the terms of a licence issued by the Government which expires on 31 May 2022.’

Meanwhile, numerous bidders are willing to pay over £2billion and Abramovich has struck a deal with the Government that will allow the sale to go through.

Originally, Abramovich handed over control of the club to the charity and trustees before announcing his intention to sell but he has now been backed into a corner.

According to the Telegraph, Abramovich has agreed to writing off loans of over £1.5billion without receiving any of the proceeds.

It is understood he has instructed The Raine Group – the American bank that paused the sale after the Russian was sanctioned – to continue the process of completing a takeover.

The same outlet also claims a deadline of the end of next week – pushed back from Tuesday – has been set for prospective new buyers’ first bids to be submitted, with Abramovich now hoping for a rapid sale and Raine hoping it attracts more bidders.

Abramovich bought Chelsea in 2003 for a reported £140million and his investment resulted in the most successful era in their history as they won five Premier League titles, five FA Cups and the Champions League twice.

A Saudi consortium today fired the starting shot in the scramble to buy Chelsea from Roman Abramovich by tabling a £2.7billion bid for the crisis-hit club, according to reports.

The development – which has not been confirmed – is likely to be controversial given the well documented human rights abuses taking place in the country.

The Saudi Media Group is not directly owned by the Saudi government, unlike Newcastle FC’s owner the Public Investment Fund (PIF). However, Khalid Al Saud is chair of the state-owned Saudi Telecom Company, in which the PIF owns shares. 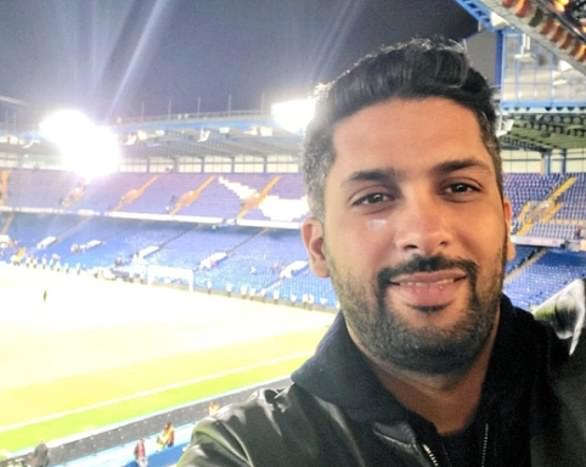 Saudi Media generates an estimated £770million per year, hence the need to bring in outside backers.

Some 200 different parties have already expressed interest in purchasing Chelsea, with all potential buyers asked to submit a detailed background report on all investors amid the growing concerns over appropriate club ownership.

Those intent on making an offer ahead of the March 18 cut off are also being asked to file details of their motives for the club moving forward as they enter the official bidding process.

Potential bidders have been provided a checklist of details they must submit with their offers, which parties are being advised should be made to Raine, the Premier League and the Government.

Bidders will be asked to supply a proof of funds letter, a full list of advisers, a business plan and a timescale for completion to accompany their offers.

But, intriguingly, potential buyers are also being asked to provide their motivations for the offer and a detailed report on the background of all the investors amid a growing focus on the issue of suitable club ownership in the Premier League.

Buyers are also advised that a cash offer – and being the highest bidder – will be crucial, however other well-placed sources insist that any consortium or individual’s ability to preserve employment at all levels at the club and fulfil their existing financial obligations will also be a key factor when deciding which bid is successful.

The issue of appropriate club ownership has been thrust back into the spotlight in recent weeks.

There remains major objections to the Saudi takeover at Newcastle given the worrying human rights record in the Islamic state.

Similarly, the Government’s decision to sanction Chelsea owner Roman Abramovich over his connections with the Vladimir Putin regime in Russia that has caused such devastation in Ukraine has left the club in complete turmoil.

Having effectively stripped Abramovich of his control at Stamford Bridge, the Government have taken charge of the sale of Chelsea and will play a lead role in deciding which offer is selected as the preferred one after Friday’s deadline.

And it appears they, along with the Premier League, are taking the issue of appropriate ownership seriously as they look to obtain as much information as possible on individuals involved in any takeover and their intentions for the future of the club. 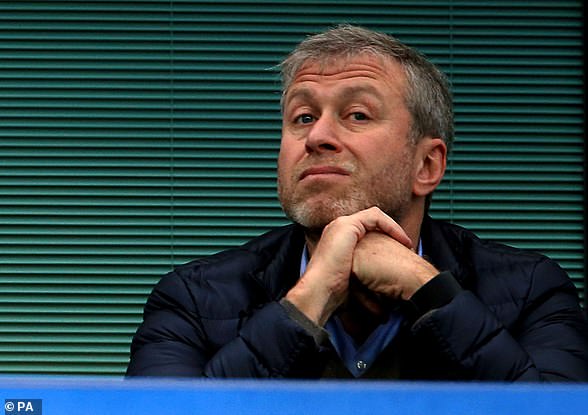 The news comes after Blues boss Thomas Tuchel told the Premier League to clarify their owners and directors test amid the club’s pending sale.

Tuchel said: ‘At some point we have to trust the process, the process of the league to control who owns a club.

‘We are famous employees because we speak into a camera and on TV but in general we are only employees and need to trust the process.

‘Sometimes we need to ask questions of the process, how this goes. It’s maybe an ongoing process and it will never end and just reminds us to be aware and conscious about it and not look away.’

An expectation now is that bidders will have to follow a process similar to a purse bid in boxing.

Potential buyers would be asked to meet qualification criteria, which could include a minimum price, commitments to completing the process by a certain date or even more detailed conditions, like agreeing to a fan representative being involved in running the club under the new owners.

If the qualification criteria were met by more than one bidder, then the buyer can be initially selected on the basis of who has offered the most money.

‘It appears to be proceeding as a ‘purse bid’ process similar to that for a world title boxing event. With a deadline of 18th March for bids,’ said Stephen Taylor Heath, Head of Sports Law at JMW Solicitors.

‘In such a scenario the banking entity handling the sale, the Raine group, would literally hold an auction style process and announce the winning bidder.

‘The bidders may have to place a deposit to show a genuine interest and access to funds. The bidders may be allowed to undertake an element of due diligence prior to making the bids on the 18th.’

‘The question is who evaluates those bids and on what criteria as it would not be Mr Abramovich as the seller which would be the normal scenario,’ added Mr Taylor Heath.