The charts that prove Tier 3 IS working: Infections are dropping across Liverpool and other parts of the North West where millions are living under toughest curbs, data shows ahead of today’s crunch vote on the month-long intervention

Charts show that England’s local lockdowns are bringing down coronavirus cases in badly affected areas and the country’s R rate could be as low as one, meaning the outbreak may have stopped growing.

On the eve of the country’s second national shutdown, on which MPs will vote later today, official data shows that measures already in place appear to be working and thwarting the spread of the virus, calling into question the toughness of the new rules.

Numbers of people testing positive in crisis areas such as Liverpool, Merseyside, Manchester, Lancaster and Blackpool have levelled off or even started falling in the weeks since the areas entered local lockdowns.

Many parts of the North of England are now in Tier Three restrictions, which effectively ban socialising in person, and now the spreading virus appears to have hit a roadblock in the region.

Professor Chris Whitty, England’s chief medical officer, yesterday admitted to MPs that the reproduction rate (R) of Covid-19 in the North East could already be below one because of the effects of localised rules.

And the ZOE COVID Symptom Study app yesterday claimed that the R rate for the entire UK has dropped to one. Meanwhile, the number of people testing positive has declined in recent days, with the 20,018 cases confirmed yesterday pulling the daily average down to 22,330.

Researchers have pointed out that ‘flatlining’ data suggests that local restrictions do work but needed more time to be effective and for that to show through in statistics. 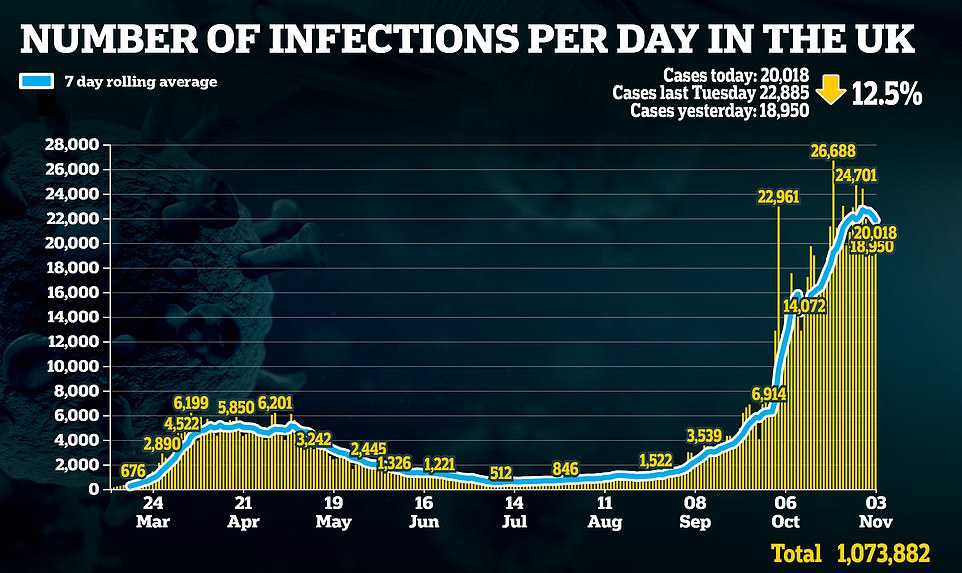 Department of Health figures saw a 12.5 per cent decrease in the number of cases from last Tuesday when figures reached 22,885 but were higher than yesterday’s figures when cases reached 18,950 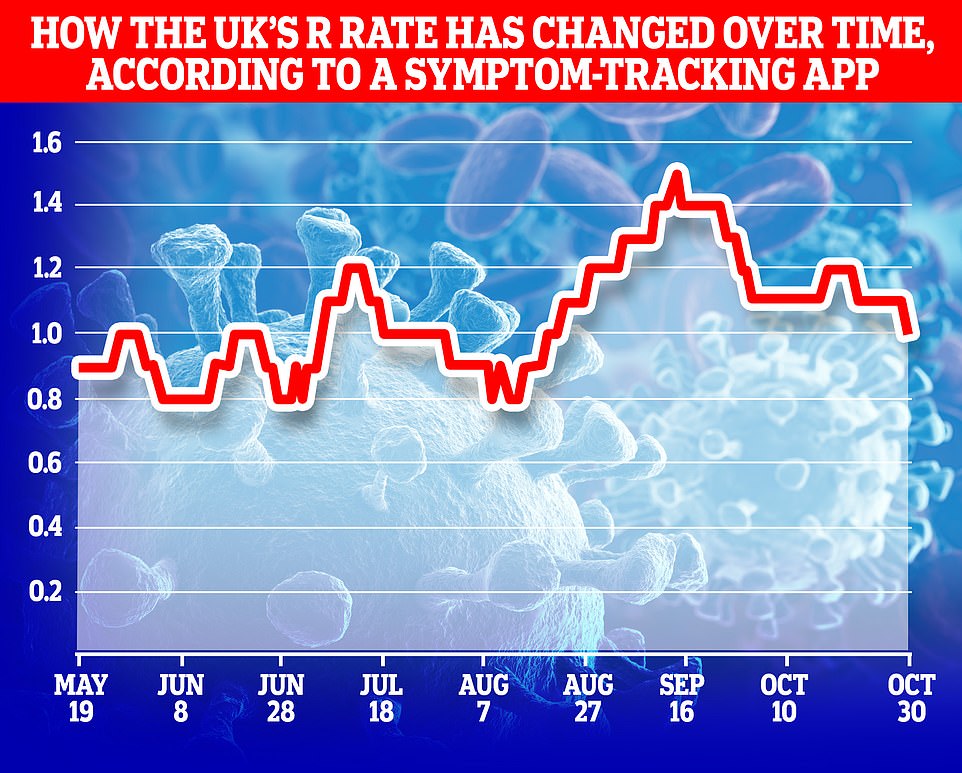 The announcement that England would face a second national lockdown from this Thursday rattled the country on Saturday as Boris Johnson announced the return of drastic measures not seen since March.

He had stuck to his guns on the local three-tier strategy for weeks, insisting that it would work, but U-turned after being warned by scientists that NHS hospitals could be completely full before the end of the year.

Boris Johnson is facing a Tory revolt on his national coronavirus lockdown in a crunch Commons vote today – with fears he will have to rely on Labour to get the plan through.

The draconian measures, ordering people to stay at home and shutting non-essential retail, bars and restaurants for a month, are set to come into force from midnight.

But while Sir Keir Starmer’s backing means the PM is assured they will be rubber-stamped by MPs this afternoon, he is scrambling to contain a rising tide of anger on his own benches.

Despite government whips hoping they had limited the scale of the mutiny to just a handful, a series politicians of broke cover this morning to say they will oppose the crackdown.

Former chief whip Mark Harper, ex-minister Steve Baker and backbencher Peter Bone were among those railing at the ‘dubious’ figures produced by Mr Johnson and his advisers to support the squeeze. The rebel numbers look to be around 20, but others could abstain.

Writing in the Telegraph, MP Steve Baker said he was ‘not convinced’ the lockdown was necessary.

‘Compliance must be high, a month may not be long enough, the breakthroughs may not come, and so on,’ he said.

‘And if we really are locking down for this purpose, keeping schools open is a huge compromise. Most importantly, the cost-benefit is today a guess.’

His chief medical officer, Professor Whitty, said in a committee meeting with MPs yesterday: ‘It is difficult to be absolutely confident about how far their effect [the tiered systems] has gone. I am confident Tier Two has had an effect and that Tier Three has had a bigger effect. I am confident of that.

‘The communities in the North and Midlands in particular, obviously London, too, went into a Tier Two and some parts of eastern England, too, have responded remarkably to this. And because of that, I am confident the rates are substantially lower than they would’ve been if this had not happened.

‘But the early indications we have at the present is that this has not achieved getting the R below one – it has brought it much closer to one – but it is still doubling over a longer period of time.’

Liverpool and Manchester and the areas around them have been the ones to face the toughest rules since the three-layer system was introduced.

In Liverpool, which was the first city to enter Tier Three, on October 14, the average number of people testing positive each day almost halved from 3,447 on October 7 to 1,828 on October 29.

Nearby Knowsley saw the same trend, with average daily cases dropping from 1,102 on October 9 to 637 per day by the 29th.

Other areas in Merseyside saw the same effect, with a shift in the outbreak’s trajectory from sharp increase to definite decline in the middle of October.

In nearby Manchester, which followed suit into Tier Three not long after, delayed by Government wrangling over financial compensation, cases also appear to have turned.

Cases plummeted at the start of the month from a high of 3,226 per day on October 3, to 2,363 on the 16th, but have since risen again but started to fall once more. The up-and-down figures suggest at least a stabilising of the outbreak there and the most recent numbers are trending downwards.

Other parts of Greater Manchester which faced the same rules at the same time have had mixed results.

Cases appear to still be rising in Oldham and Bury, but have started to level off in Trafford and Tameside.

In Lancaster, which went into Tier Three on October 16, cases have clearly declined. They hit a peak of 615 per day, on average, on October 20, and have since dropped to 371 per day on October 29.

Leaked NHS data yesterday suggested that the NHS is currently running with 84 per cent of its inpatient beds full, which is a significantly lower level than average for this time of year.

Clear data is not being published about how much strain the health service is really under, despite constant warnings to the public and ministers that it could be overwhelmed within weeks.

Professor Carl Heneghan, an Oxford University researcher sceptical of the Government’s lockdown policy, told The Telegraph: ‘This is completely in line with what is normally available at this time of year.

‘What I don’t understand is that I seem to be looking at a different data-set to what the Government is presenting.

‘Everything is looking at normal levels and free bed capacity is still significant, even in high dependency units and intensive care, even though we have a very small number across the board. We are starting to see a drop in people in hospitals.

‘Tier Three restrictions are working phenomenally well and, rather than locking down, I would be using this moment to increase capacity.’

Meanwhile, researchers on the Covid Symptom Study, run by health-tech company ZOE and King’s College London, yesterday announced that they believe the R rate for the UK has fallen to one.

A rate of one means the outbreak will continue at the same size and speed, with each infected person passing the virus to one other. Below one and it will shrink, and above one it will grow. This was the first time since August that the team estimated the R to be at one.

Professor Chris Whitty has suggested England’s second lockdown could be over by Christmas — but warned the nation was in it for the ‘long haul’ and revealed that the draconian restrictions will likely be swapped out for a revamped tiered system.

During a grilling by MPs yesterday ahead of a vote on the tough blanket measures this afternoon, England’s chief medical officer stoked hopes that families may be able to spend the festive period together after insisting there was a ‘realistic possibility’ that the measures could be lifted on December 2. 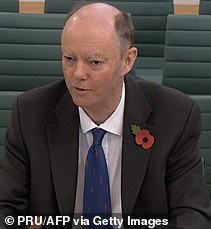 Ministers have refused to fully commit to the end date in case the blanket intervention does not have the desired effect. However, Professor Whitty argued there was a good chance England will have moved into a ‘different state of play’.

Asked if the new lockdown that comes into force from tomorrow would work, Professor Whitty told MPs in the Science and Technology Select Committee: ‘If people adhere to it in the way I expect they will, it will reduce R below one… It will make a huge difference.’

And he said the goal was to ‘move into a series of tiers at the end of that period’. But he admitted Number 10 would have to consider adopting different rules to ‘match the situation we see ourselves in at the end of this month’.

Around 10million people living in the North West and the Midlands are already under Tier Three, which bans socialising with other households and orders pubs to shut unless they serve substantial meals. Another 20million are under the second tightest bracket, which bans people from meeting friends and family indoors.

Politicians and scientists have acknowledged that the country’s outbreak is being led by surging cases and hospital admissions in the North of the country, but that this is creeping into other regions.

Official estimates of the R rate, produced weekly by SAGE, also suggest that the speed at which the epidemic is growing has declined.

Last week the Government’s scientists predicted that the R was between 1.1 and 1.3 for England the UK as a whole and could be as low as 1.0 in the worst-hit North West. Yesterday Professor Whitty admitted it might even be below one in the North East.

Signs that the second wave of coronavirus could be at a turning point made an appearance in the national data yesterday as the UK recorded a 12.5 per cent week-on-week decrease in the number of people testing positive.

The Department of Health figures, which initially were delayed in their release, saw a further 20,018 people test positive for the virus, taking the total number of confirmed cases during the pandemic to 1,073,882.

Meanwhile fatalities rose by 8.17 per cent from last Tuesday after it was announced that another 395 people had died from the virus today – bringing the total death toll to 47,250.

The latest death figure marks a rise from yesterday when 136 deaths were recorded in Britain and are also higher than last Tuesday when the number of deaths reached 367.

The all-settings figures – which covers cases in care homes, hospitals and the wider community across the home nations – will now call into question whether the Government’s tier structure restrictions were already beginning to have an effect on the nation’s rates of transmissions prior to the announcement of a second lockdown.

Boris Johnson has appealed for Tories to back his coronavirus lockdown and told his Cabinet that the draconian month-long restrictions in England were essential to avoid ‘fatalities running in the thousands’.

He said the R rate was currently ‘only just above one’, but acting to reduce it would give more space to deploy mass testing, new treatments and make progress on a vaccine.

However, Mr Johnson is up against a growing backlash with many MPs questioning the scientific basis for the squeeze.

Amid fears of a growing rebellion, the Prime Minister has desperately tried to sooth anger on his backbenches by giving a firm commitment that the curbs will expire on December 2.

‘Whatever happens these restrictions end on December 2,’ he told the Commons.

‘I think there is the prospect of a much brighter future ahead if we can make a success of these national measures and open up again in December, to give people the chance of some shopping and economic activity in the weeks leading up to Christmas and beyond.’