EXCLUSIVE: Cars line up for TWO MILES to receive free groceries in Florida as food bank hands out essential supplies to more than 2,000 people during the coronavirus pandemic

Just under 2,000 people were fed after vehicles lined a carriageway in Florida for two miles on Thursday to collect donations amid the coronavirus pandemic.

Residents of Miramar were seen blocking one side of the road as they patiently waited their turn to enter an outdoor food bank that bridged the gap for those affected by the COVID-19 outbreak.

In Florida, there were more than 22,897 cases of coronavirus and 633 deaths on Thursday afternoon.

According to the latest Labor Department figures released on Thursday, there were 5.2 million new claims for unemployment benefits filed last week. 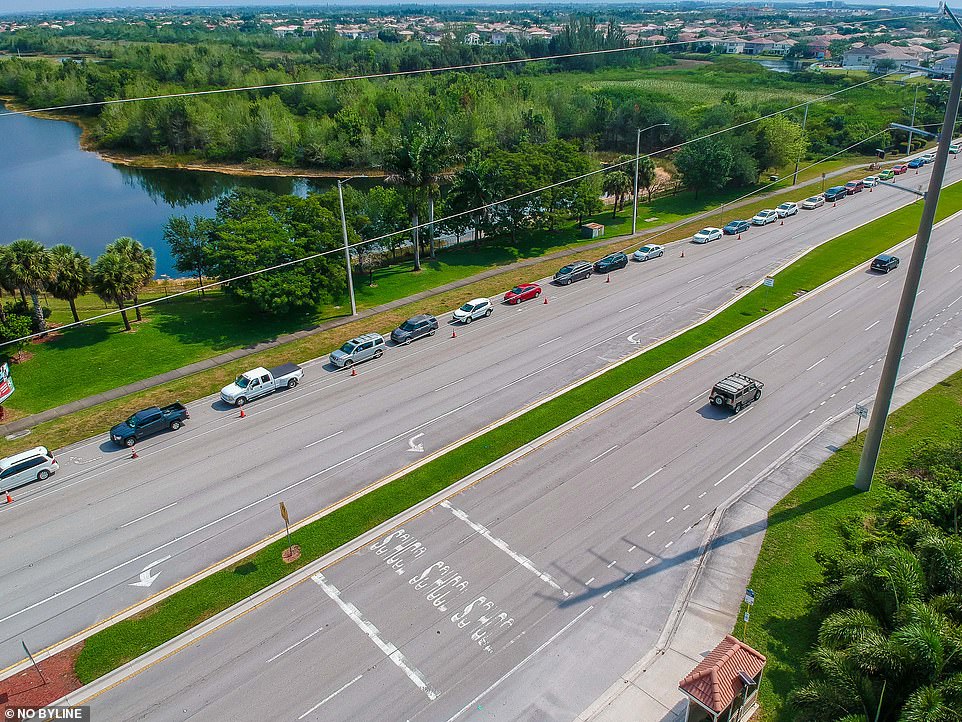 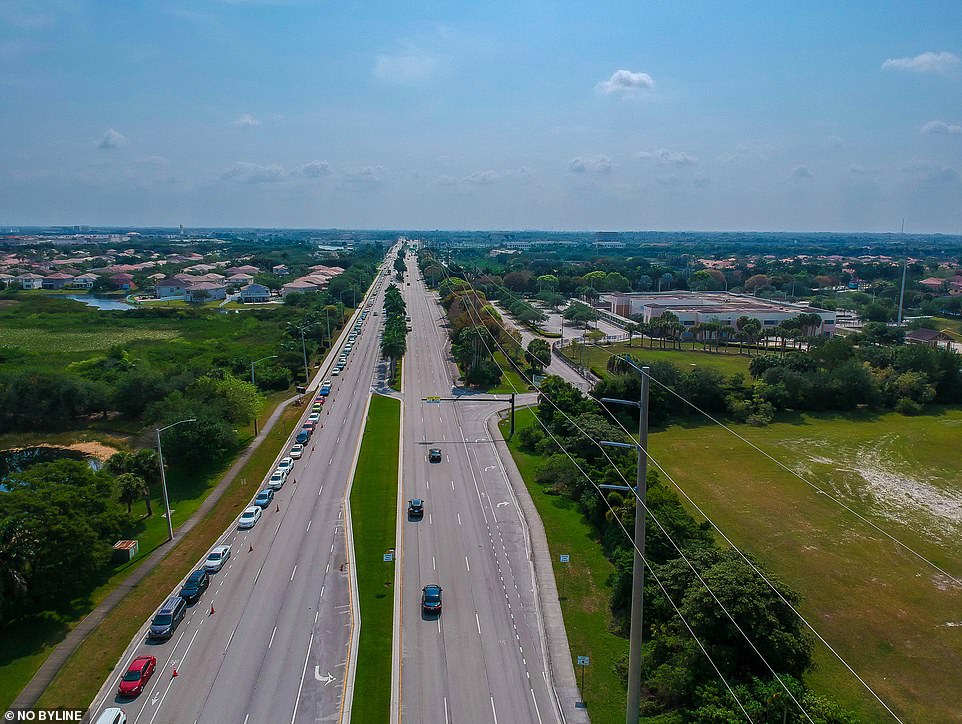 The long lines stretched down the road as there was widespread growing unemployment in Miramar, Florida during the coronavirus pandemic 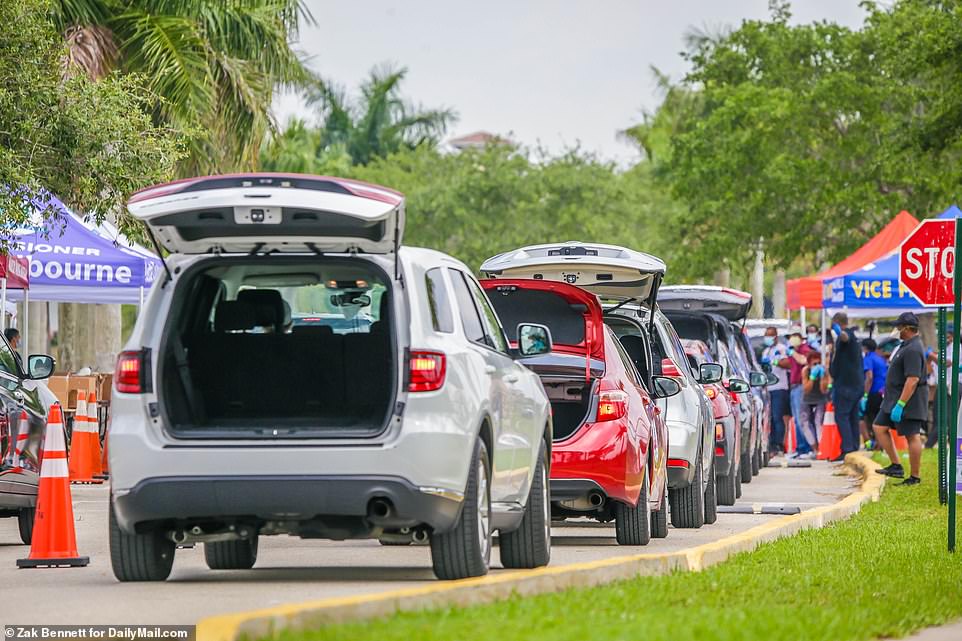 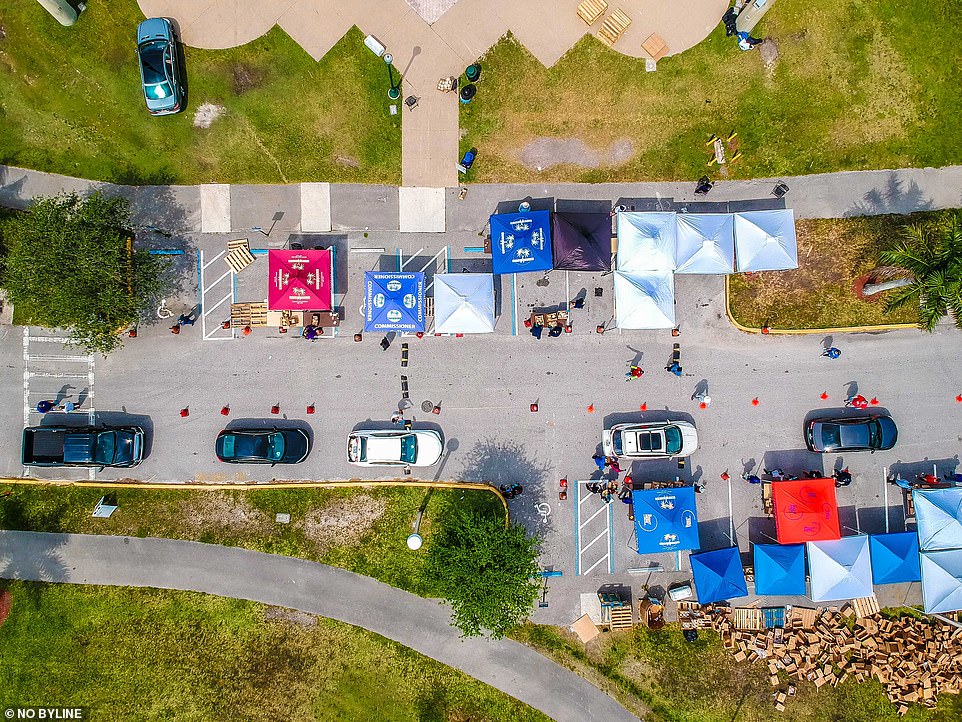 An aerial image shows the cars stopping to collect food from the stand on Thursday in Miramar, Florida 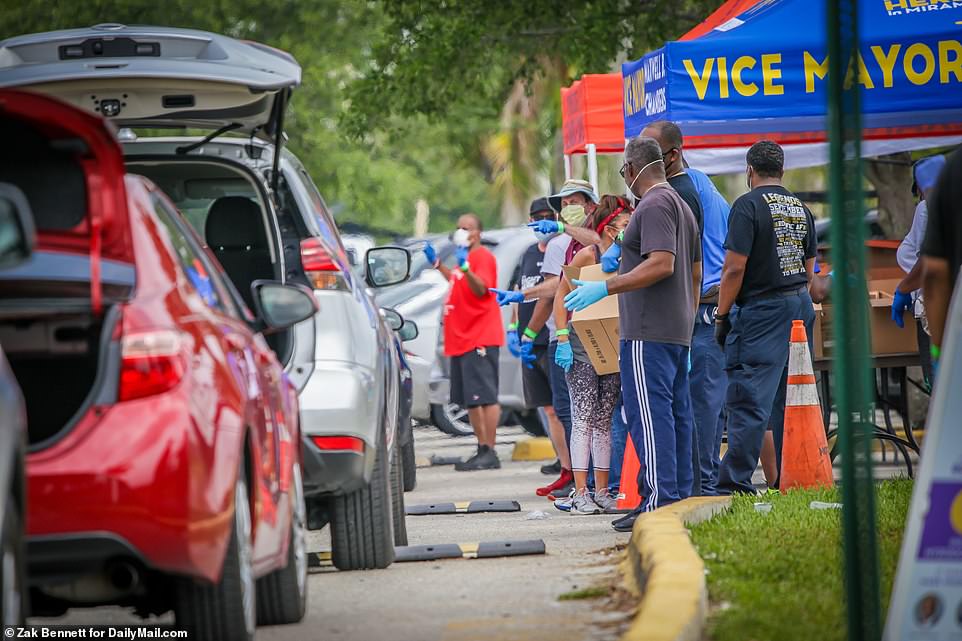 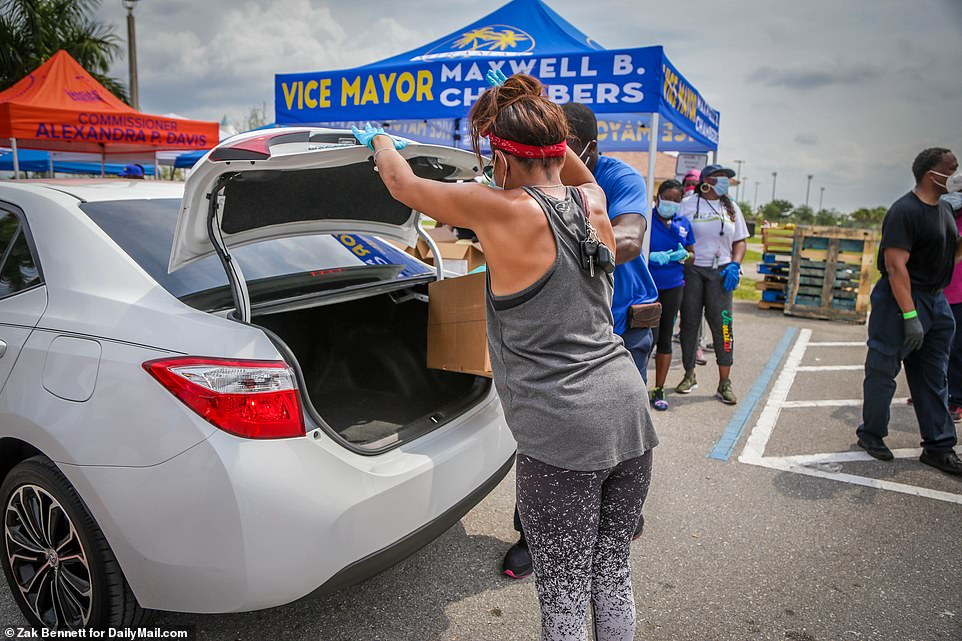 Those working with the Vice Mayor Maxwell B. Chambers are seen loading a box into a car at the food bank 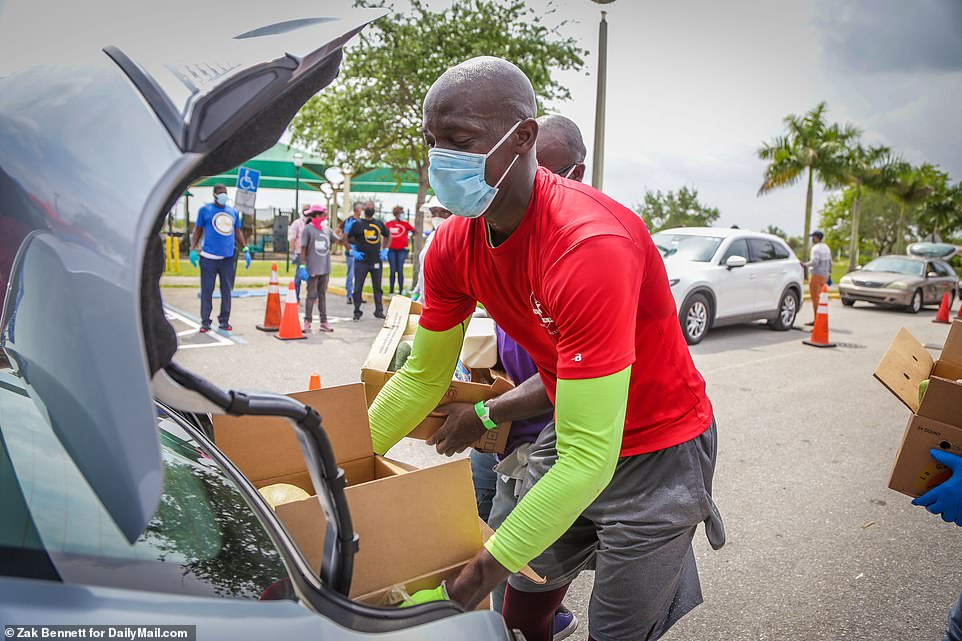 According to the latest Labor Department figures released on Thursday, there were 5.2 million new claims for unemployment benefits filed last week

The staggering number of first-time claims was on top of the 16.8 million applications filed since the virus took hold in mid-March.

It means at least 22 million Americans have been thrown out of work in four weeks – making it the worst stretch of US job losses on record.

All businesses deemed nonessential have been closed in 48 states as the economy has essentially shut down. Some economists say the unemployment rate could reach as high as 20 percent in April, which would be the highest rate since the Great Depression.

On Thursday the City of Miramar and Feeding South Florida teamed up to put food in the mouths of families affected.

Even for those who have not lost their jobs, hourly wages have been scaled back, and many children have lost access to free school meals. In addition senior congregate meal sites have shut down.

As part of Feeding South Florida’s COVID-19 Response Fund, companies such as Ultimate Software, Inc.have agreed to match donations dollar for dollar up to $250,000. 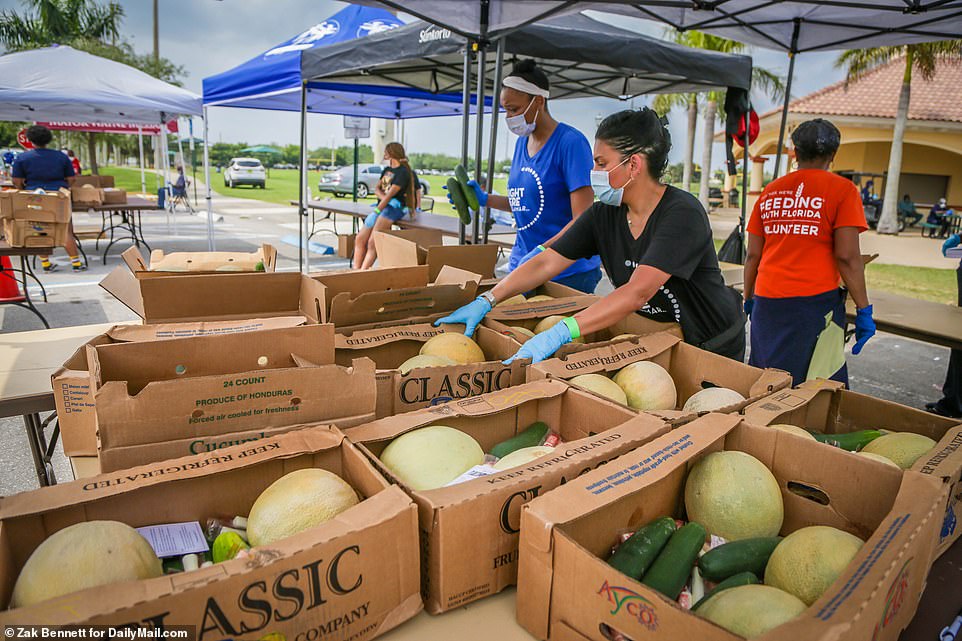 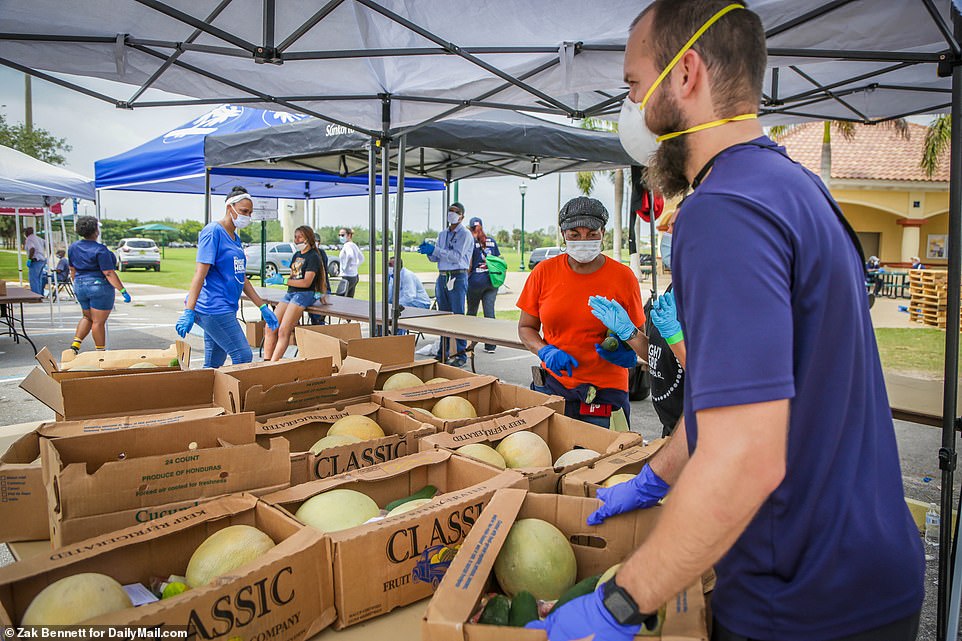 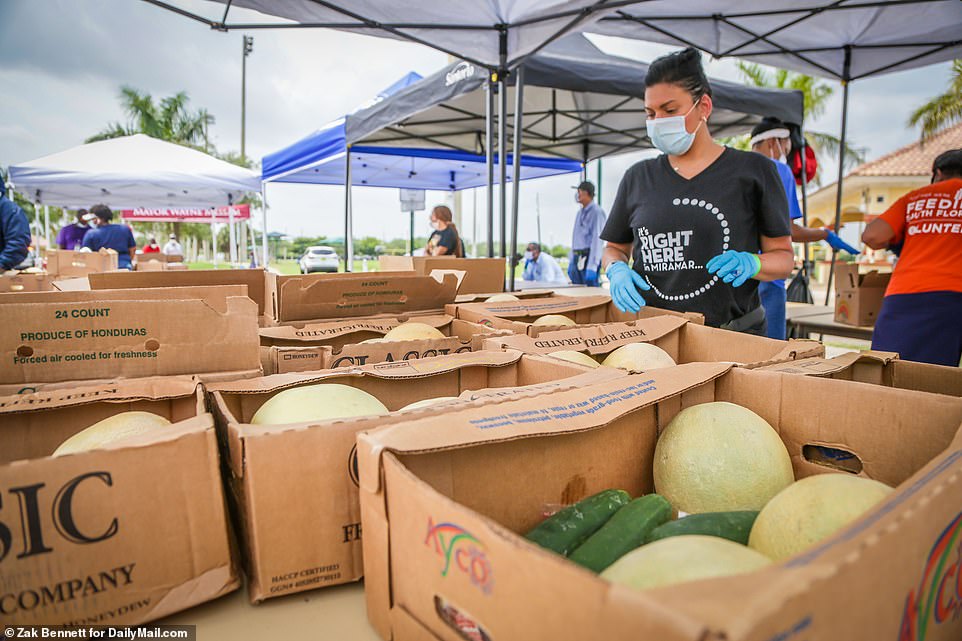 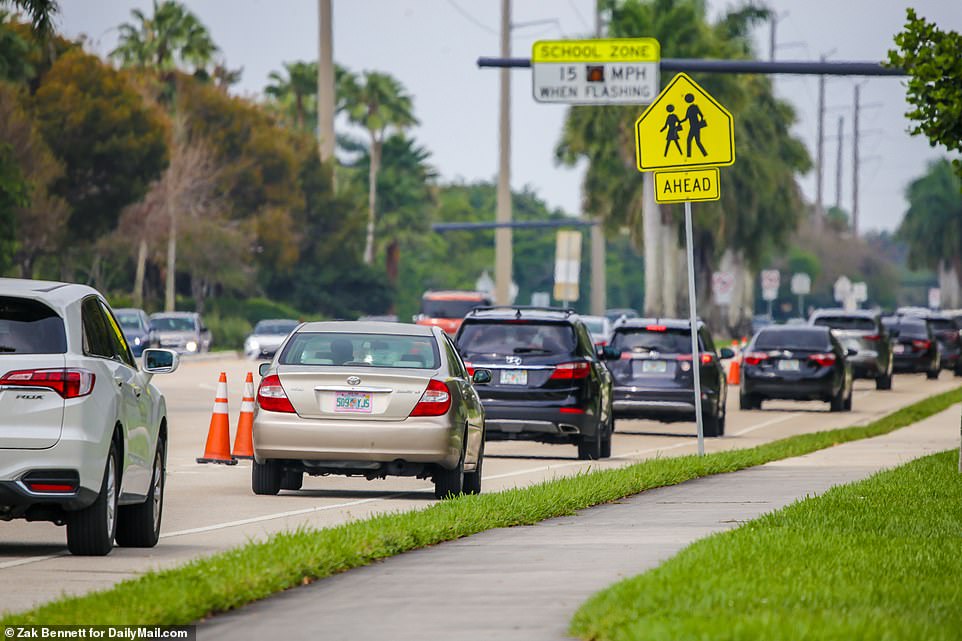 People drove from all over the tri-county after hourly wages have been scaled back, and many children have lost access to free school meals amid the pandemic 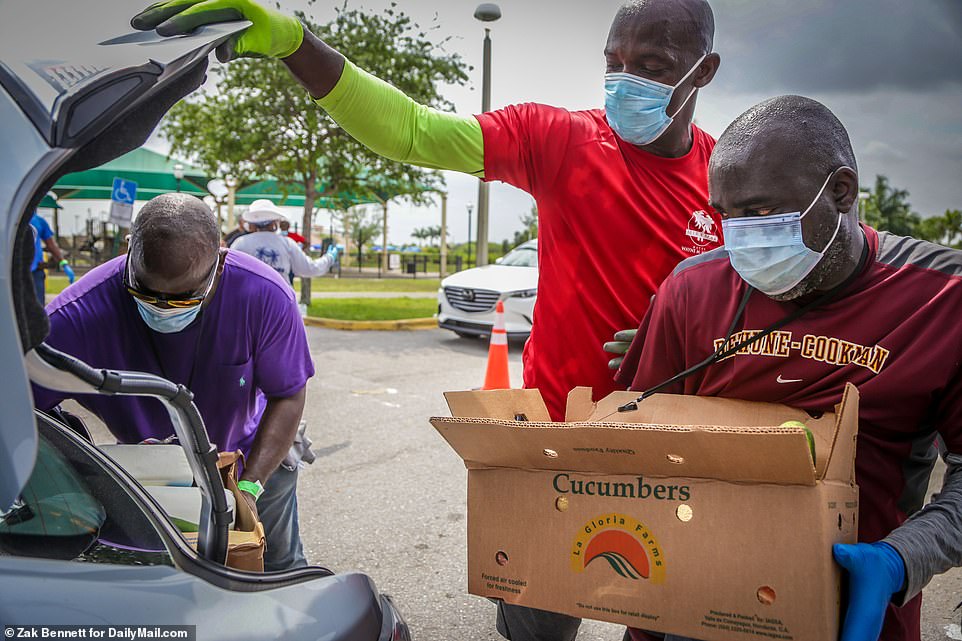 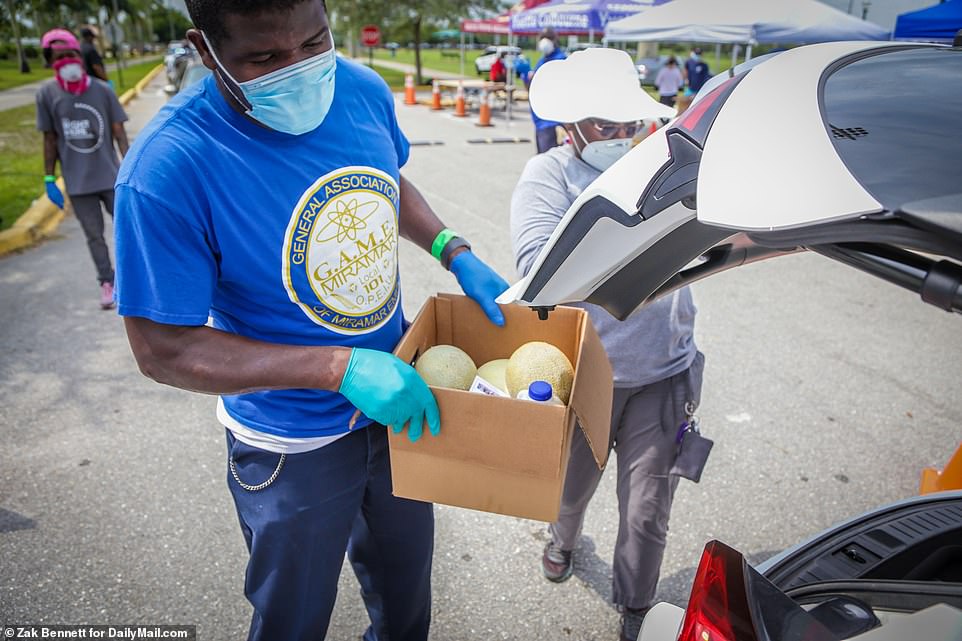 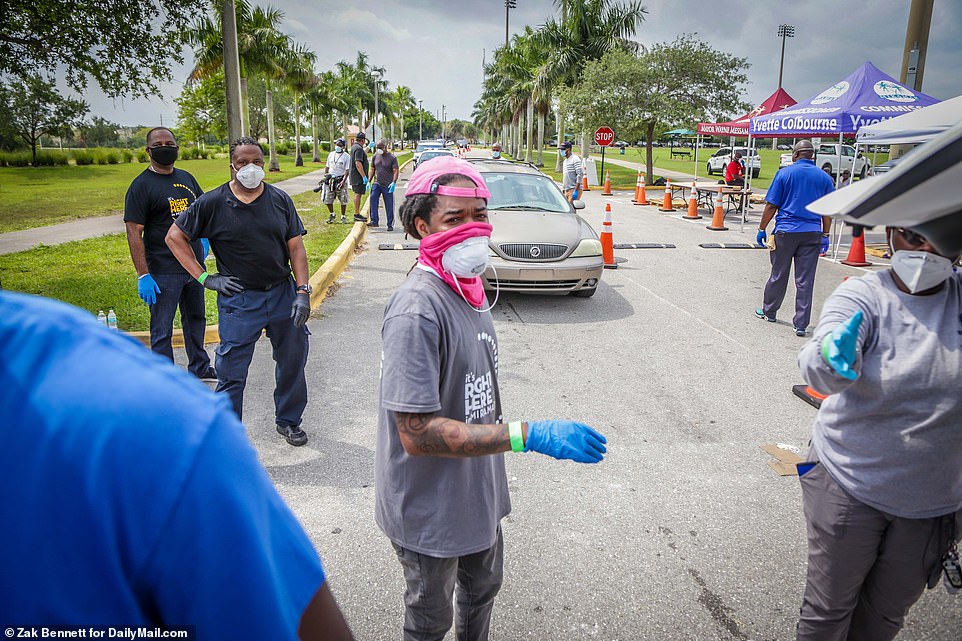 Volunteers and residents were seen wearing protective gloves as food was distributed among the needy.

‘This is our first major food drive,’ Assistant City Manager Kelvin L. Baker Sr. told DailyMail.com. ‘Our second one was last Saturday and this is a little different. The majority of workers are city workers and one done last Saturday was primarily volunteers from the community.’

He said both food banks have provide food for slightly under 2,000 people during what he described as ‘difficult and challenging times’.

Although the majority of the line went home with boxes during the bank, they unfortunately had to let some people go without.

‘Hopefully next week when we come back, we’ll be able to take care of even more,’ Baker added.

They were providing meals for people in the tri-county area, Baker said.

‘People come from as far south as Homestead and as far north as West Palm Beach,’ he added about the locations each about an hour away by car.

‘It’s an indication of the lack of funds and resources and this is the result,’ Baker said about the food bank. ‘Our mayor in commission and city manager is really committed to doing everything we can to help address some of these deficiencies in our environment here.’

‘When you seen the expression on media, the recipients face, it means all the world and our employees are really proud to be here to support this effort.’ 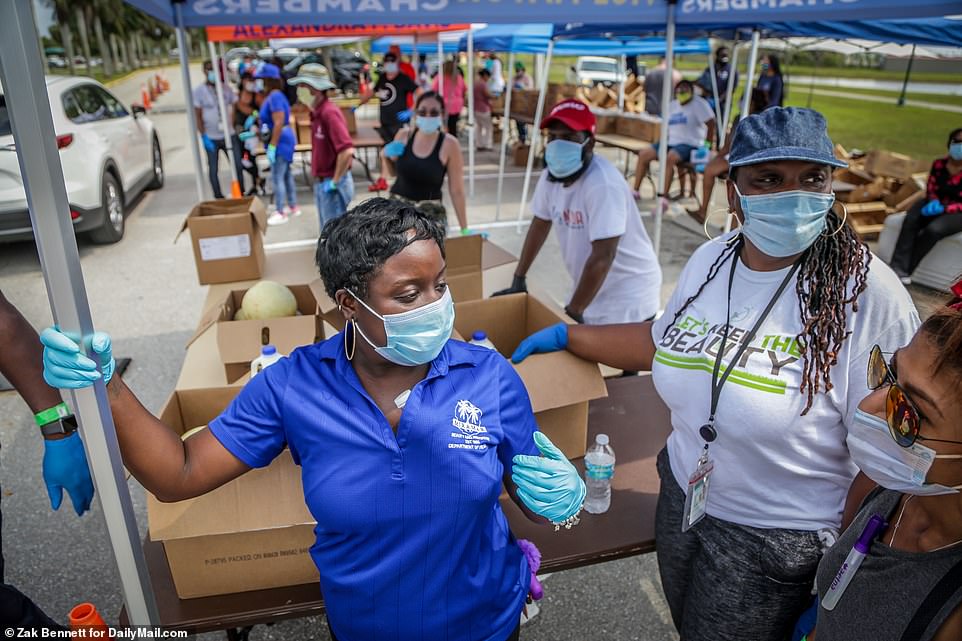 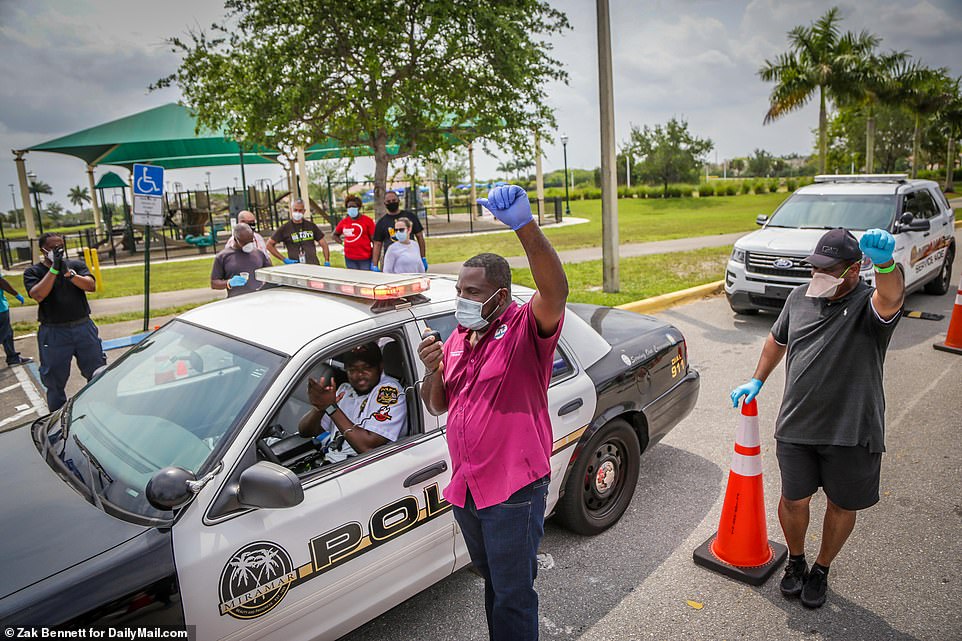 Team work: A Miramar policeman is seen applauding after the food bank ended on Thursday when they ran out of produce 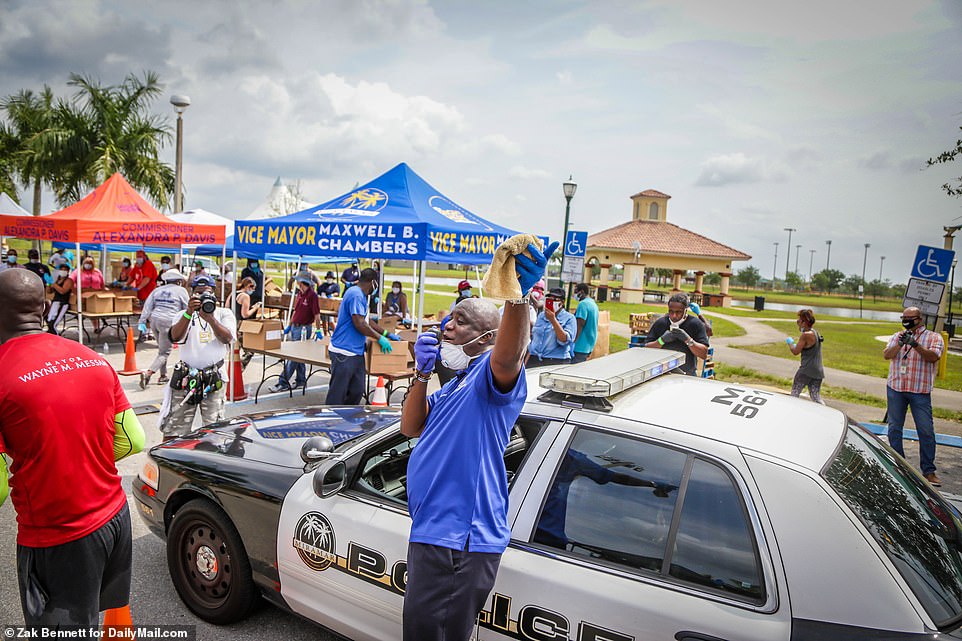 It was a successful day but some people who came for food went without, according to the assistant city manager 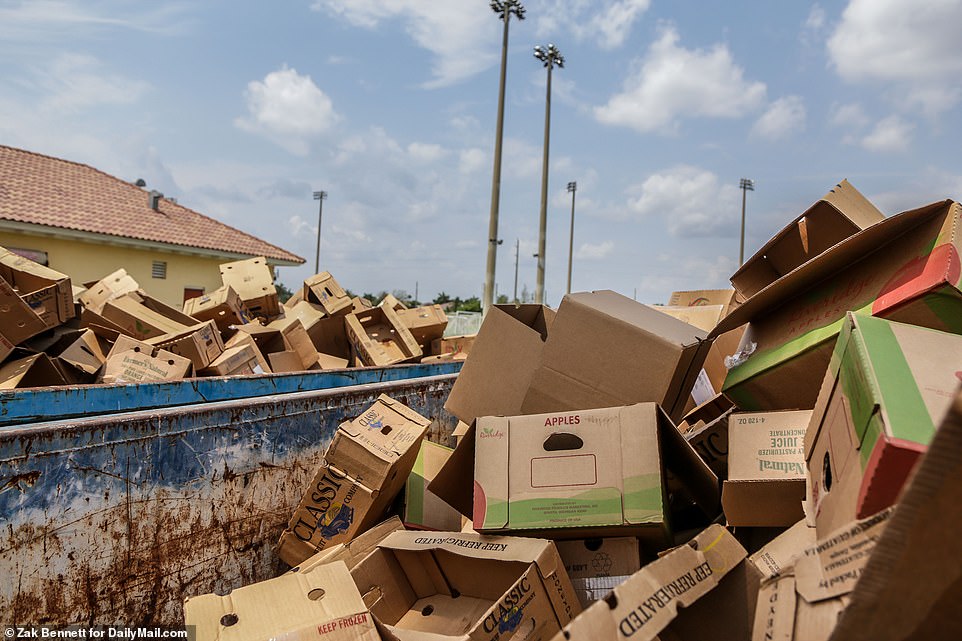 The group served up food to just under 2,000 people according to the Assistant City Manager Kelvin L. Baker Sr