London: Statues of Captain Cook in Britain are under scrutiny after campaigners added the “genocidal” explorer to a national hit list.

Two statues in London and Whitby – his hometown, two museums and a pub are among 125 landmarks and tributes that activists want renamed or removed.

The list follows similar moves in Australia, where in Sydney, for example, a bronze statue of Captain Cook that dates back to 1879 was defaced during Black Lives Matter protests in June.

Additions to the British list include Captain Cook Square, Captain Cook’s Crescent, James Cook University Hospital and a Captain Cook museum, all of which are in Middlesbrough, plus the Captain Cook Memorial Museum in Whitby. 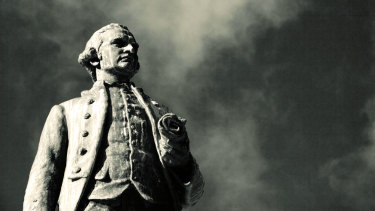 A Captain James Cook statue overlooks the small harbour town of Whitby, where he was born.

The “Topple the Racists” list, compiled by the Stop Trump Coalition in response to the Black Lives Matter movement, has more than doubled in length since it was first published in June 2020, analysis by London Telegraph found. Other monuments targeted by campaigners, who claim that Britain “must face the truth about its colonial past”, include the Oxford tribute to Cecil Rhodes and numerous statues of Robert Peel.

“James Cook invaded Australia just over 250 years ago. He claimed possession over the entire nation even though it clearly belonged to the people already there,” the coalition’s website reads.

“What followed was 250 years of genocidal activities and policies based on race that murdered thousands of women, men and children. Captain Cook symbolises racial oppression and violence. [The statues] must be removed.” 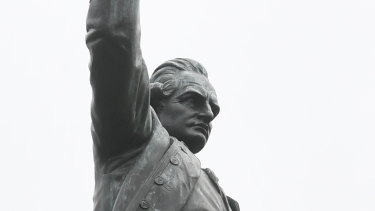 Robert Goodwill, the MP for Whitby and Scarborough – home to one of the statues and the Memorial Museum – said targeting the memorials was “completely ridiculous”.

“They’re trying to erase important aspects of our history, and we all need to study history and learn from any mistakes. There were things done in the name of the Empire that would not be acceptable now, but we don’t need to expunge them from history.”

Tourists visit the seaside town in North Yorkshire from as far away as Australia to see the harbour from which Captain Cook first set sail on his voyage, Goodwill added. “We’re proud of Captain Cook in Whitby, and we wouldn’t countenance any attempts to remove him from the history books.”

The statue, which was designed by sculptor John Tweed, has overlooked Whitby, where all four of Cook’s ships were built, since 1912.

Wetherspoons is understood not to have any plans to rename The Resolution, its Middlesbrough pub named after Cook’s flagship, as the pub chain believes that the link is entirely historical. A spokesman for the company said: “It goes without saying that slavery is abhorrent. We will examine any examples of historical connections which are brought to our attention, including The Resolution, and discuss with customers and staff.”

Polling commissioned by the BBC in 2002 resulted in Cook, who made the first recorded navigations of New Zealand and indigenous Australia, being ranked at number 12 in the corporation’s list of the 100 greatest Britons.

Under laws outlined by Robert Jenrick, the Communities Secretary, statues, plaques and memorials will not be removed without a formal planning process, with prominent context being given for more controversial monuments. The new legislation will take effect in the northern spring.