‘Some days I can’t breathe’: Canadian woman, 35, who has been sick with long-term effects of COVID-19 for NINE MONTHS fears the effects could be permanent

A woman from Canada who caught coronavirus is still suffering from symptoms of the disease 257 days after she was infected.

Ashley Antonio, 35, from Edmonton only suffered mildly from the virus when she contracted in almost nine months ago.

But now she appears to be suffering from the effects of so-called ‘long Covid’.

Public health officials tend to agree that COVID-19 is usually described as a short-term illness with most people recovering within two weeks however it’s become increasingly clear that this is not the case for everyone, and that the two-week period is only the ‘acute illness’ phase. 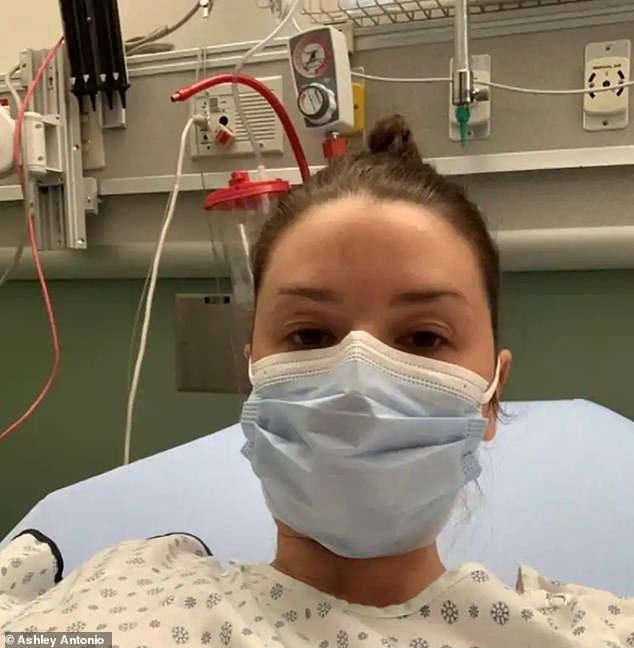 Ashley Antonio, 35, (pictured in hospital) from Edmonton only suffered mildly from the virus when she contracted in almost nine months ago

Antonio now suffers from a variety of complications some of which are painful and unpredictable, including blinding headaches, lung congestion, rashes, chronic swelling in her joints and heart palpitations.

‘Some days I feel OK, other days I wake up and I can’t breathe, I can’t move,’ Antonio said to CBC.

‘I was extremely healthy. I had no pre-existing conditions, none of the comorbidities health officials were talking about, and it just came in like a wrecking ball and destroyed my life.’

Antonio has struggled for several months with what she says are debilitating symptoms and was forced to take off five months off work on short-term disability from her job as a Edmonton-based trial lawyer.

As someone who used to exercise every day she now she struggles to even get up the stairs without feeling out of breath.

‘The media and the medical community seem to give the impression that you are either recovered within 10 days and life is normal again, or you die,’ Antonio said.

‘And there is a huge group of people that are struggling somewhere in the middle of that and our lives are impacted every day in terrible ways.’

Antonio first fell ill in late March and thought that she had been struck down with stomach flu. The following morning she woke up and could barely stand.

After about a week the symptoms subsided but this was only just the first wave.

A few weeks later she felt ill once again and she began suffering body aches. Even standing up would make her heard race and a causal walk around the block lead to black-outs.

She also had problems with her memory and concentration – at one point unable to recall her own name. 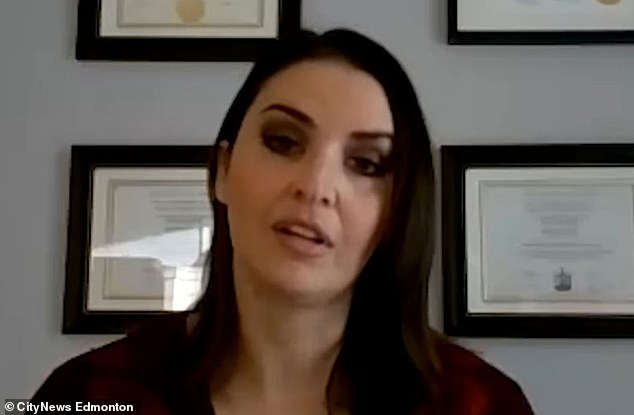 Antonio now suffers from a variety of complications some of which are painful and unpredictable, including blinding headaches, lung congestion, rashes, chronic swelling in her joints and heart palpitations 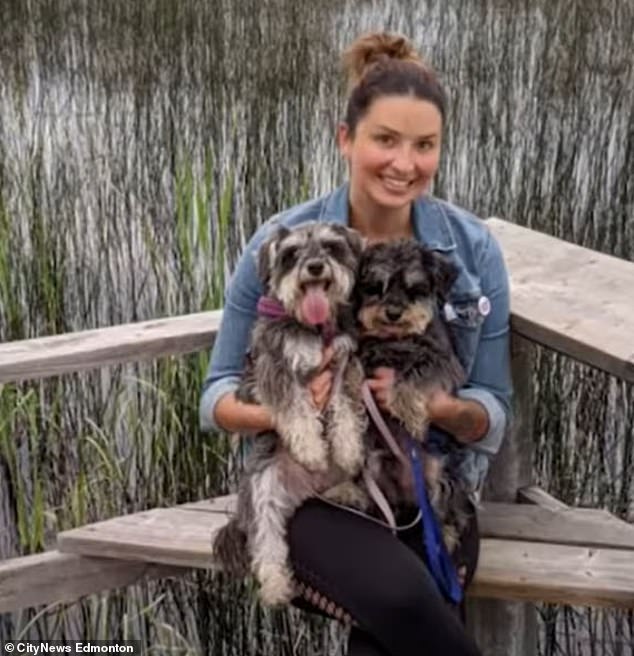 Six weeks after the symptoms first appeared, she went to the emergency room believing she was having a stroke.

‘I couldn’t feel half of my face and the whole left side of my body for about half-an-hour,’ she said.

‘The night prior, I had crazy night sweats. My bed was soaking wet and I was seeing things in the night and talking to people that I later found out were not there.

‘If I’m not laying down, my heart rate is through the roof,’ she said. ‘To have it now be difficult to walk, and have that be chronic and likely progressive, is really distressing.’

Antonio has been admitted to the hospital four times since March and has undertaken a battery of tests to assess the damage.

She has developed rheumatoid arthritis and diagnosed with postural orthostatic tachycardia syndrome (POTS), a blood circulation disorder triggered by malfunctions in the nervous system.

A COVID-19 antibody test was initially positive but she has now tested negative meaning she could likely be infected by the disease for a second time.

With research into long covid still in its infancy, Antonio’s case is still proving puzzling and she wonders if her symptoms will ever fully resolve.

‘Now, when I have a few good days, I know that the bad days are coming back. It just makes it feel like it will never end.

LONG COVID: WHAT IS IT AND COULD IT BE FOUR DIFFERENT SYNDROMES?

Covid-19 is described as a short-term illness caused by infection with the novel SARS-CoV-2 coronavirus. Public health officials tend to say people will recover within two weeks or so.

However it’s become increasingly clear that this is not the case for everyone, and that the two-week period is only the ‘acute illness’ phase.

The North Bristol NHS Trust’s Discover project, which is studying the longer-term effects of coronavirus, found that out of a total of 110 patients given a three-month check up, most (74 per cent) had at least one persistent symptom after twelve weeks. The most common were:

Other long term symptoms that have been reported by Covid-19 survivors, both suspected and confirmed, anecdotally, include hearing problems, ‘brain fog’, memory loss, lack of concentration, mental health problems and hair loss.

The impact of Long Covid on people who had mild illness have not been studied in depth yet.

Data from the King’s College London symptom tracking app shows that up to 500,000 people in the UK are currently suffering from the long-term effects of Covid-19.

Academics at the National Institute for Health Research — headed up by Professor Chris Whitty — were asked to review the limited evidence on long Covid to help both patients and doctors understand the ‘phenomenon’.

Their findings warned that even children can suffer and it can’t be assumed that people who are at lower risk of severe illness and death from Covid-19 are also at low risk of lasting side effects.

Doctors cautioned some mental health problems such as anxiety and depression in ‘long-haulers’, as they are known, could be down to lockdowns, as opposed to the virus itself.

The experts also claimed that the symptoms could be grouped into four different groups: