A manhunt was underway in California this week for a “coordinated group” of 11 suspected thieves who ran into a Louis Vuitton store and fled with more than $100,000 in handbags, according to authorities.

Police said the incident occurred around 5:30 p.m. Monday at a shopping center in Palo Alto, about 30 miles south of downtown San Francisco. The group stormed the store, grabbed 36 handbags, and fled the scene, an investigation revealed.

“They exited the store quickly, ran through the mall, and fled in five vehicles prior to police arrival,” according to Palo Alto police.

Witnesses described the suspects – who were all wearing face coverings — as Black males and females, possibly in their late teens or early twenties, police said. The suspects caused no injuries, and no weapons were used during the alleged theft, authorities added.

Surveillance video of the incident will not be released by police, who shared two photos of a suspect on Tuesday. A witness was able to photograph the woman as she fled through the mall carrying some of the stolen handbags, police said. 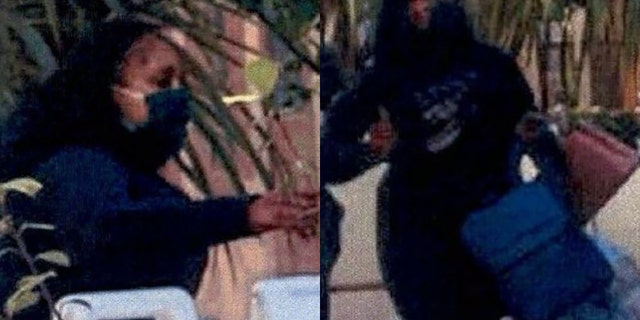 A witness was able to photograph a female suspect as she fled through the mall carrying some of the stolen handbags, police said.
(Palo Alto Police Department)

Authorities were working with regional partners to see if the suspects may be linked to other similar crimes in the area.

Palo Alto police said a similar case occurred at a Neiman Marcus store in the city last month, though the vehicles used in the incident were different, according to FOX 2 of the Bay Area.

Anyone with information about the June incident is asked to call the Palo Alto police 24-hour dispatch center at (650) 329-2413.