On your bike, Boris! Brits say they’re not being squashed by lorries and smelling at work after being told to cycle as Tory mayor hopeful says Sadiq Khan must pull his finger out and get tubes running at capacity (which is still FOUR WEEKS away)

Boris Johnson’s back-to-work blueprint has already begun to unravel after the public poured cold water on hopes they could commute by bike.

The government is expected to unveil a plan which will urge people to cycle to work to relax the strain on public transport.

Yet the trailed proposal has been met with squeamishness from workers claiming it is impractical – and even potentially perilous for novice cyclists navigating busy city roads.

Many who live miles away from their workplaces stressed it would be impossible for them travel by bike or on foot, while others highlighted not all offices are kitted out with showers.

Transport Secretary Grant Shapps is looking to overhaul the way millions of Britons commute because reduced train and bus services risk being overwhelmed.

Mayor of London Sadiq Khan has come under heavy fire for failing to increase capacity on the Tube ahead of an expected rise in passengers.

The Prime Minister is likely to sketch out a time-frame for workers to return when he sets out his road map from lockdown in an address to the nation tomorrow night.

But Londoners face the nightmare prospect of a crippled Underground network, which Mr Khan has previously said will not be back to full functioning for some weeks.

Piling on the pressure, Shaun Bailey, Conservative candidate for Mayor, told MailOnline: ‘The only way London can get back to work safely is if the Tubes are running at full capacity so social distancing is actually possible.’

He added: ‘Londoners are past the point of excuses – what we need is a Mayor who will move heaven and earth to ensure TfL is ready to meet the increased demand.’

Mr Khan is also urging people to cycle and walk to work, which politicians have branded ‘madness’ and rubbished the notion of people in outer boroughs commuting into central London in this way. 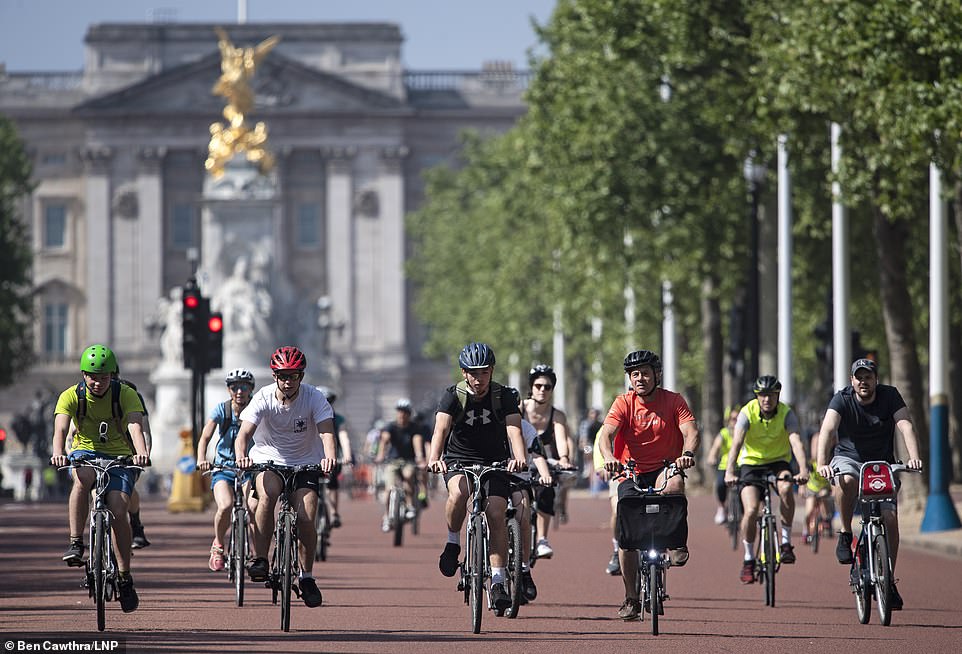 The PM’s plan is expected to encourage people to cycle or walk to work if they can, with firms also due to be told to provide workers with face masks. Cyclists are pictured at Buckingham Palace today 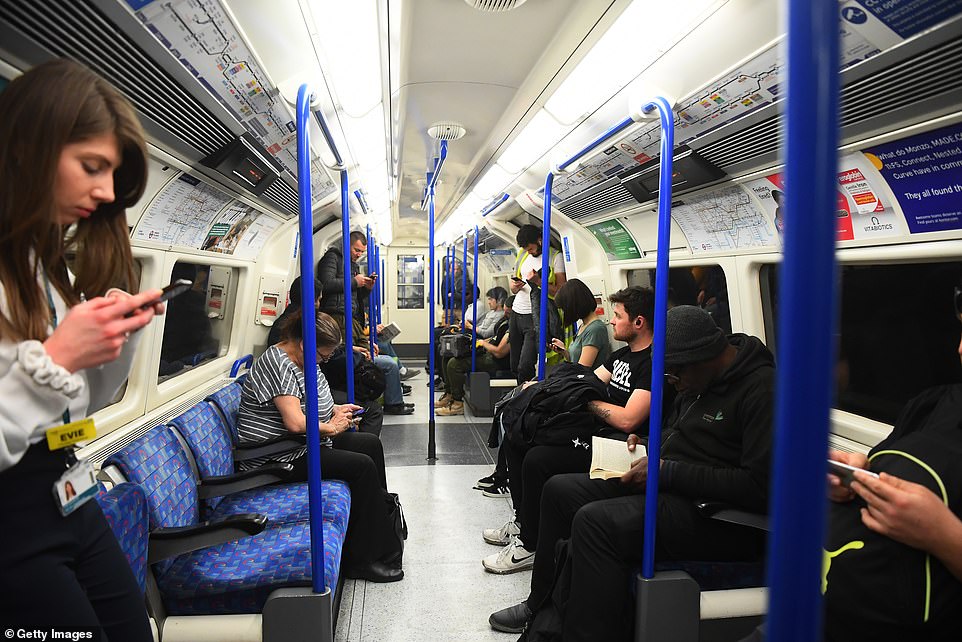 Commuters are still using public transport including the Northern Line in London, but there is a lot more space compared to passenger numbers before the coronavirus lockdown 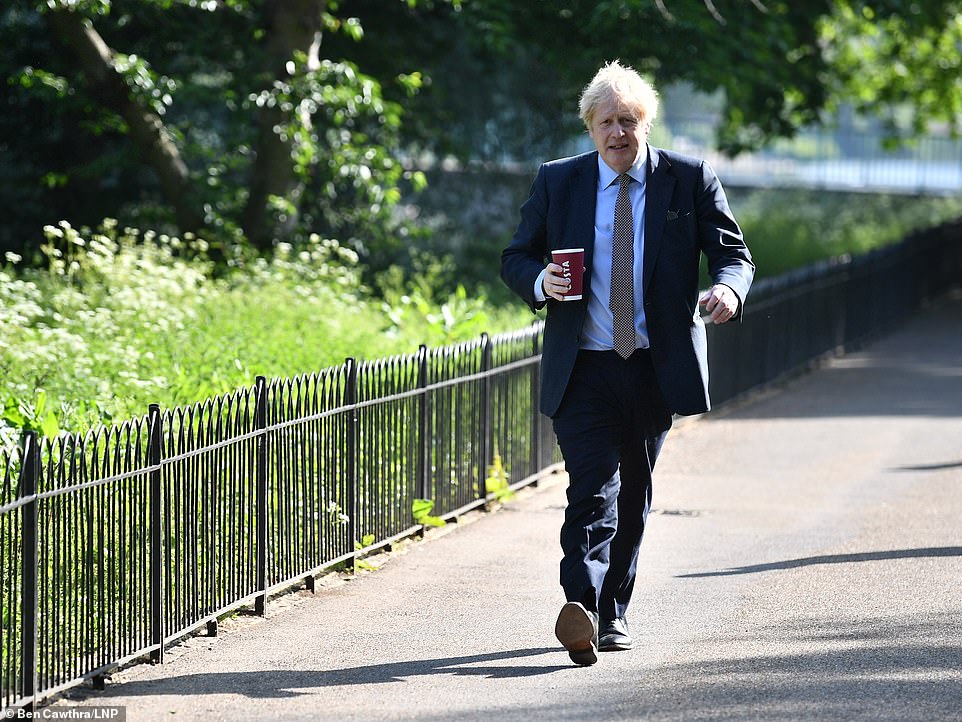 Boris Johnson, pictured in St James’ Park in London this morning, will set out his lockdown exit plan tomorrow night

A teenage cyclist is fighting for his life after being hit by two cars in quick succession on Friday night.

The 16-year-old boy was cycling along Streatham High Road in south London when he was involved in the suspected double hit-and-run, police said.

He was found by officers critically injured at the scene and taken to hospital, where he remains in a life-threatening condition.

It is believed he was in collision with a car and, seconds later, struck by a second car travelling close behind.

The drivers of both vehicles failed to stop at the scene, although two men were later arrested at separate locations in the local area.

Both men – each aged in their 20s – remain in custody at police stations in south London.

The two drivers are not thought to be known to each other, but enquiries as to the full circumstances are ongoing.

The public reacted to the government’s plans to encourage to cycle to work by pointing out a range of flaws.

One person said: ‘I’d like to cycle to work every day Prime Minister, but as a novice having to navigate dual carriageways and the like I wouldn’t last a day.’

Another said: ‘More than happy to cycle to work if the government can promise I won’t be squashed by a lorry on the way through central London…’

A Tory MP told MailOnline: ‘It sounds like a very London-centric policy. In most parts of the country it is not an option.

‘We are in a situation where if you can do that you probably already do.

‘It almost sounds a bit gimmicky. We should be looking at ways to make it easier for people to drive at the moment because that actually from a health point of view is better.’

In London, the Mayor has poured cold water on hopes the Tube network will be brought back to full functioning to accommodate the return of workers.

Transport for London (TfL) will require four weeks to prepare for the easing of lockdown as 7,000 staff have been furloughed and a fifth are self-isolating.

TfL said it is currently ‘running the maximum frequency’ possible, but even during lockdown the Tube has been seen rammed.

Nurses have even been forced to fork out for Uber rides across London for fear of becoming contaminated on their normal Tube journey to work.

To overcome what is predicted to be an 80 per cent reduction of London’s pre-crisis public transport capacity, Mr Khan is urging people to cycle and walk to work.

Yet City Hall assembly members have tore into the plan and rubbished the notion residents of outer boroughs could cycle and walk into central London.

‘Increasing cycling and walking will certainly be part of the solution, but it is complete madness to think they can replace millions of journeys on London’s Tube and buses.

‘Some of Sadiq Khan’s Streetspace plan might work in Central London, but it won’t work for the majority of those living in Outer London.

‘It’s simply not possible for many Londoners who live in the outer boroughs to cycle or walk into work.

‘If the Mayor wants them to avoid using cars, he needs to make a plan to get London’s public transport moving safely now.

He added: ‘In the coming days, the government is looking to ease the lockdown. If the Mayor hasn’t prepared Transport for London to safely transport thousands more commuters, he’s jeopardising people’s health and our city’s economic recovery and putting jobs at risk.’ 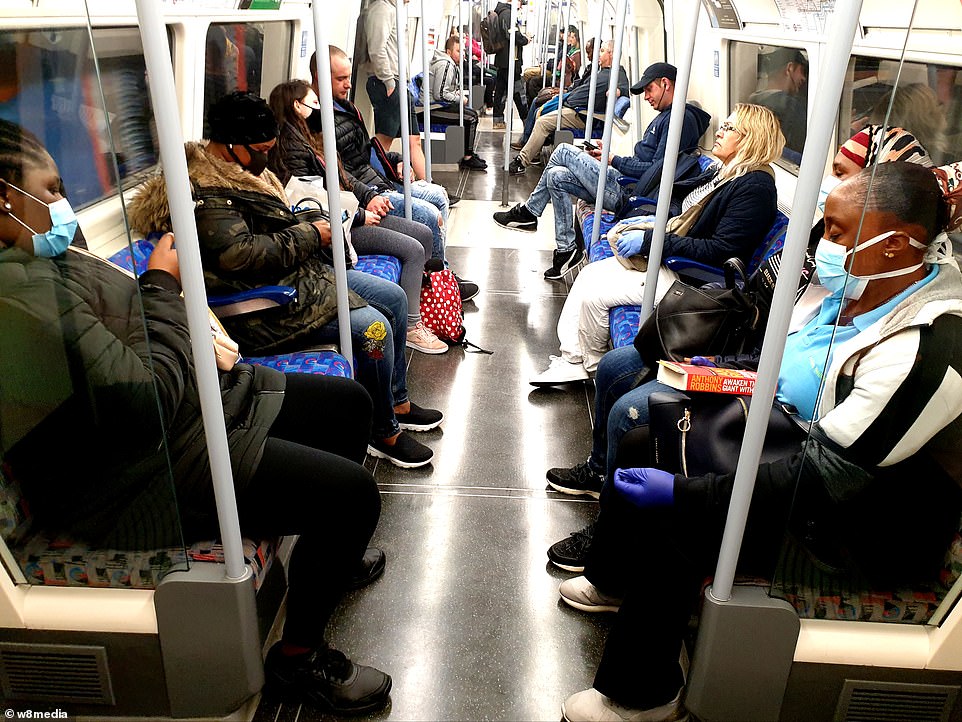 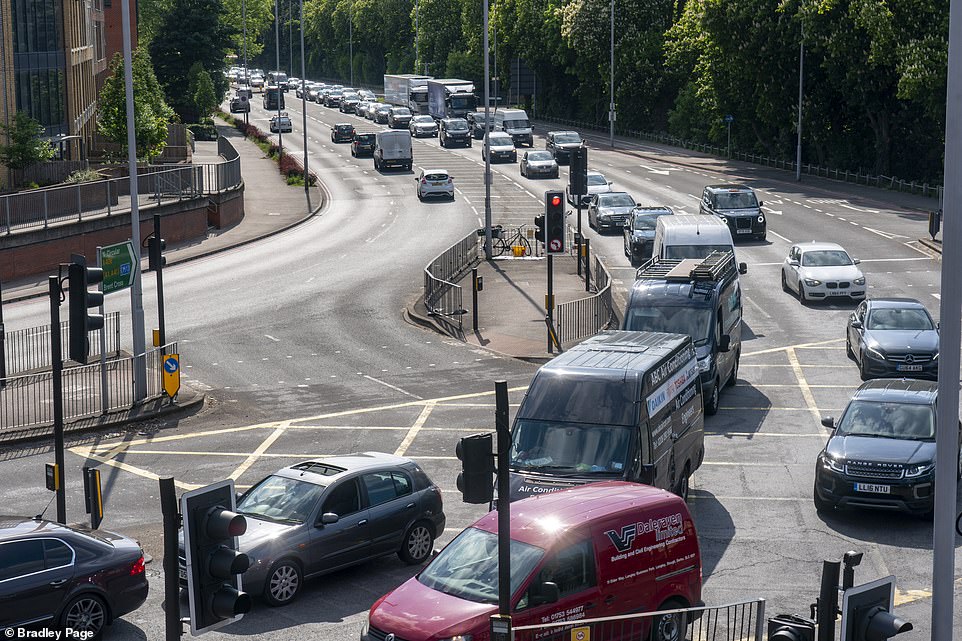 Eager to steer clear of trains, concerns have been raised that many commuters could instead drive to work and clog up the country’s roads (the North Circular at Arnos Grove in North London pictured) 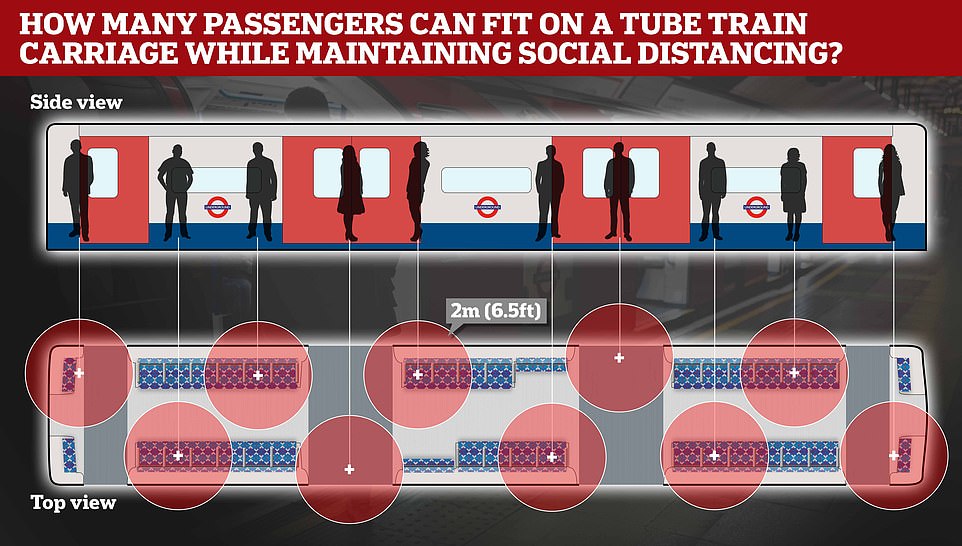 Under a two-metre social distancing rule on carriages and platforms, the Underground will only be able to accommodate 50,000 passengers boarding every 15 minutes – a massive reduction on the 320,000 people every 15 minutes during normal peak times 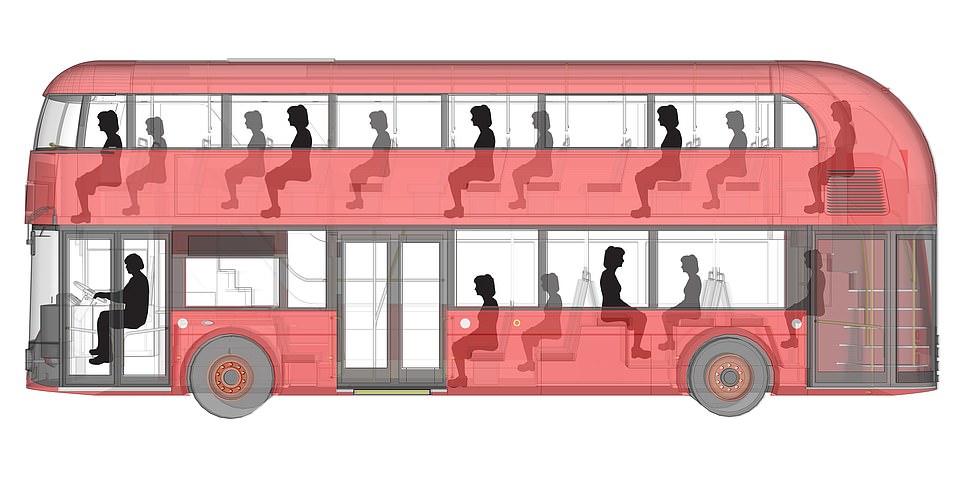 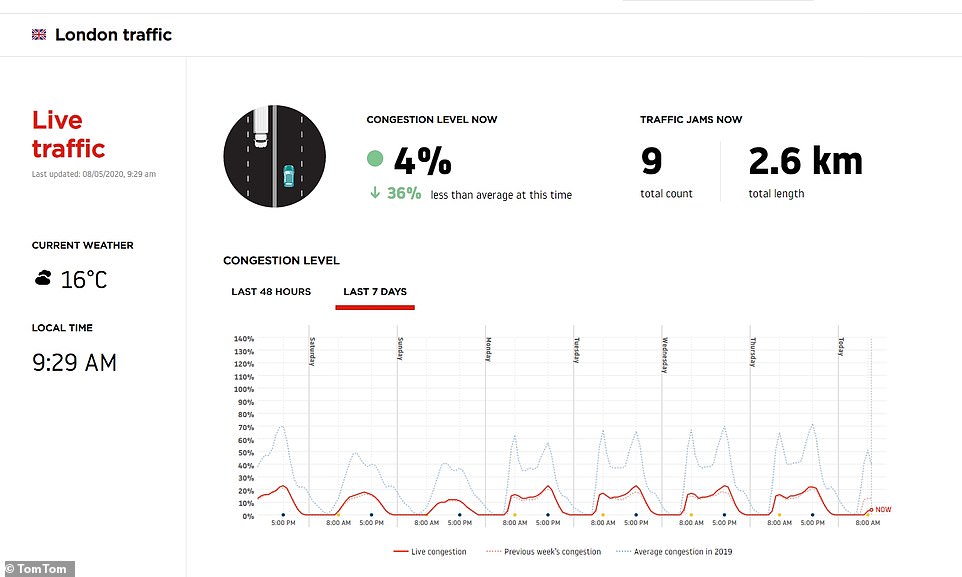 In London, congestion is gradually rising on roads despite lockdown continuing with more traffic reported as weeks go on

Employees ‘could get legal right to work from home’

Ministers are considering enshrining a right to work from home into UK law in order to better prepare the nation for post-lockdown life.

The merits of such a move are being weighed up by officials at the Department for Business, Energy and Industrial Strategy.

It is thought the plans are being modelled on existing rules that allow parents to request flexible working.

Ministers believe a legal right to work from home could be beneficial for a number of reasons.

Firstly, it would reduce the number of staff physically present, making it easier for firms to adhere to social distancing.

Secondly, it would stop workers from feeling compelled to go to an office they do not believe is safe.

Third, it would reduce pressure on the UK transport network.

One minister told The Telegraph the move ‘makes complete sense’.

Grant Shapps has also swung behind cycling and walking as a workaround to limited public transport.

The Transport Secretary is due to use his appearance at the daily Downing Street press conference this afternoon to announce a major cash injection to improve cycle lanes.

Transport unions have threatened to scupper any move to get too many people back onto trains and buses as chiefs have said they ‘will not compromise on the health, safety and livelihoods of our members’.

Among measures under consideration to get London moving are asking commuters to wear face masks, strict queing at stations, asking employees to stagger shifts, increasing the price of rush hour fares.

If two-metre social distancing remains in place, buses will only be able to take 15 passengers, rather than 85.

Outside of the capital, rail bosses are urgently planning to revive national train routes which have been mothballed during the lockdown.

A blueprint to flesh out reduced timetables – which are operating only half of pre-lockdown journeys – is being drawn up in time for Monday, May 18, when swathes of the workforce are expected to troop back to offices.

Eager to steer clear of trains, concerns have been raised that many commuters could instead drive to work and clog up the country’s roads.

A perfect storm of traffic jams and reduced train capacity risks hamstringing the Prime Minister’s plans to get people back to work in the coming weeks.Mr Johnson will tomorrow night set out a road map to loosen restrictions that will likely include plans to fire up the flagging economy and give a boost to shuttered businesses.

A spokesperson for the Mayor of London said: ‘Sadiq is working extremely hard with Transport for London, the Government and other partners to prepare public transport in London for the easing of lockdown.

‘These plans are at an advanced stage – as demonstrated by the unprecedented StreetSpace project launched last week.

They added: ‘We need to be honest with Londoners that life simply will not be returning to how it was before. Everyone who can work from home will have to continue doing so for the foreseeable future.

‘Many more people will have to walk and cycle to work. ‘We will all have to continue to avoid making unnecessary journeys.

‘London’s planning for the easing of lockdown will be made much easier when the Government is open and transparent about exactly and when restrictions can be lifted – which has a fundamental impact on different transport options.