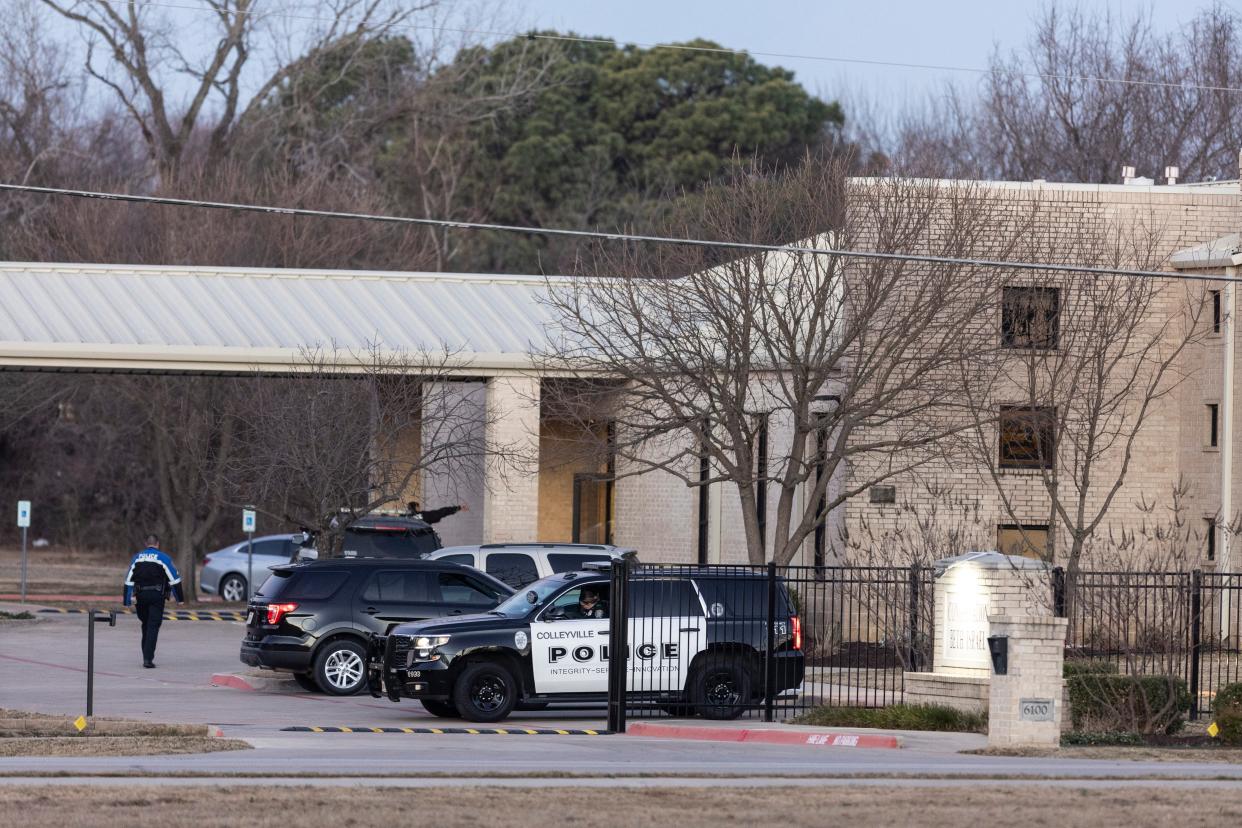 The FBI on Sunday identified British national Malik Faisal Akram, 44, as the person who took hostages in a standoff at a Texas synagogue.

Two teenagers were also arrested in Britain in connection to the hostage situation, the Greater Manchester Police announced on Twitter. They were arrested Sunday evening, the police said, and remained in custody for questioning as of 7:00 p.m. ET.

The Greater Manchester Police did not name the suspects or whether they faced any charges. FBI Dallas spokeswoman Katie Chaumont referred questions to police in Manchester.

Dallas FBI chief Matthew DeSarno said the investigation involved Britain and Israel, and the assailant was focused on an issue not directly connected to the Jewish community. London’s Metropolitan Police said Akram was from the Lancashire area of northwest England and British counterterrorism police worked with U.S. authorities on the case.

None of the four hostages at Congregation Beth Israel in Colleyville, a city of 26,000 people 15 miles northeast of Fort Worth, was injured. DeSarno did not discuss how Akram died but said in a statement Sunday that the shooting would be reviewed.

The hostages included Rabbi Charlie Cytron-Walker, who said Sunday that the assailant was “increasingly belligerent and threatening” in the standoff’s last hour. Cytron-Walker expressed gratitude to law enforcement for their efforts – and to many others for their prayers.

A law enforcement official who spoke to USA TODAY on the condition of anonymity said Akram demanded the release of Aafia Siddiqui, a Pakistani neuroscientist serving 86 years in a Texas prison for attempting to kill Americans in Afghanistan. Siddiqui is suspected of having ties to al-Qaida. Akram reportedly wanted to speak with Siddiqui, who is housed in a federal prison in Fort Worth.

Law enforcement and FBI crisis negotiators responded Saturday morning to Congregation Beth Israel. Akram took four hostages, though one man was released, according to the Colleyville Police Department. The standoff ended when an FBI SWAT team stormed the building.

President Joe Biden, visiting a food pantry in Philadelphia on Sunday morning, said the hostage taker purchased weapons on the street and may have recently come to the USA, spending his first night in a homeless shelter. Akram’s immigration status and history were not immediately available.

“Rest assured, we are focused,” Biden said. “The attorney general is focused and making sure that we deal with these kinds of acts.”

Siddiqui was detained in 2008 by Afghan authorities along with handwritten notes that referred to a "mass casualty attack" and listed various locations in the USA, including the Empire State Building and the Brooklyn Bridge. Other notes referred to the construction of dirty bombs and reconnaissance drones, underwater bombs and gliders, according to federal prosecutors.

When U.S. officials attempted to interview Siddiqui in Ghazni, Afghanistan, she grabbed an Army officer's M-4 rifle and shot at an officer and other members of the interview team, declaring her intent to kill Americans.

Marwa Elbially, Siddiqui’s Texas-based lawyer, told USA TODAY that Siddiqui was not involved in the hostage situation and that her only brother, an architect who lives in Houston, confirmed that he had nothing to do with it, either.

John Floyd, chairman of the Houston board of the Council on American-Islamic Relations, said his group stood in solidarity against the "antisemitic attack against a house of worship." Floyd, a lawyer for some members of Siddiqui's family, said they strongly condemn the attack.

"Dr. Aafia’s family has always stood firm in advocating for the release of their sister from incarceration by legal and non-violent means only," Floyd said in a statement, and the attack "directly undermines those of us who are seeking justice for Dr. Aafia."

Saturday’s services at Congregation Beth Israel were livestreamed on the synagogue’s Facebook page. The Fort Worth Star-Telegram reported that an angry man could be heard ranting and talking about religion at times during the livestream, which didn’t show what was happening inside the synagogue.

Shortly before 2 p.m., the man said, “You got to do something. I don’t want to see this guy dead.” Moments later, the feed cut out. Meta Platforms, the corporate successor to Facebook, confirmed that Facebook had removed the video.

New York Rabbi Angela Buchdahl said she was brought into the negotiations before the crisis ended. Buchdahl, senior rabbi at Central Synagogue and a leading figure in Reform Judaism, told the Jewish Telegraphic Agency that the gunman called her and she spoke twice to the attacker. Central Synagogue said Buchdahl had no relationship with the gunman and she “immediately contacted law enforcement and followed their directions” after receiving the first call.

“It was a surreal and scary day,” Buchdahl told the agency. “I am so grateful for the outcome.”

Israeli Prime Minister Naftali Bennett said he thanked Texas Gov. Greg Abbott for "the determined action of the law enforcement forces in Texas that brought the event to a peaceful conclusion, for his steadfast stand with the Jewish community, his support for Israel and for his fight against antisemitism."