London: British Prime Minister Boris Johnson and his partner Carrie Symonds have announced that they are expecting a baby and are engaged. 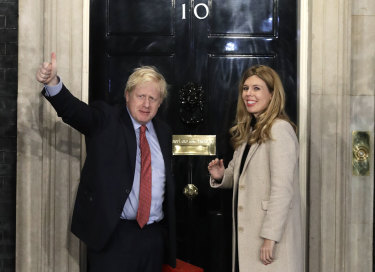 "The Prime Minister and Miss Symonds are very pleased to announce their engagement and that they are expecting a baby in the early summer," a spokesperson for the couple said on Saturday.

Johnson, 55, and Symonds, 31, made history as the first unmarried couple to officially live together in Downing Street when they moved in to the official prime minister's residence last year.

Symonds, a conservationist and former Conservative Party communications chief, first found herself making headlines when she was romantically linked to Johnson earlier in 2019.

But her association with Johnson dates back to when she worked on his successful re-election bid at City Hall in 2012.

The announcement means the Conservative Johnson will become the first British prime minister to marry in office for 250 years, the Telegraph said.

The Sun newspaper quoted a Downing Street source as saying "Boris and Carrie are both delighted at this news. They have both known for a while but have kept it under wraps until the pregnancy progressed."

"It partly explains why he has been lying low recently – although he works flat out and that won’t change. Carrie is thrilled and she will also continue to work on her environmental projects," the paper quoted the source as saying.