London: Britain is in negotiations with AstraZeneca to buy what is likely to be the first vaccine produced to specifically deal with the Beta COVID-19 variant first identified in South Africa.

The British government is helping to fund the new tailored vaccine, which could be used as a booster shot in a planned pre-winter vaccination drive. 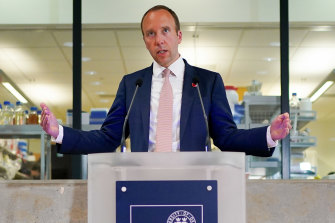 “We have started commercial negotiations with AstraZeneca to secure a variant vaccine: future supplies of the Oxford/AstraZeneca vaccine that have been adapted to tackle the B.1351 variant first found in South Africa,” Health Secretary Matt Hancock told the Oxford-based Jenner Institute.

The vaccine candidate is currently in clinical trials. A spokeswoman for AstraZeneca said the company would share more details in “due course”.

“Any future version of the vaccine would need to be approved for use by the medicines regulator,” the spokeswoman said.

The Beta variant has been found to be more transmissible than the original COVID-19 strain and the most resistant of the variants to vaccines.

The UK was the first country to approve a vaccine for emergency use and began administering jabs on December 8. As of Thursday, more than 75 per cent of Britain’s population had been given a first dose and nearly half (49.5 per cent) had been fully vaccinated. More than 65.6 million doses have been administered so far, more than 14 times the number Australia has rolled out.

The British government is on course to complete the full reopening the economy on June 21 and is working on the rollout of booster shots in the second half of the year. However, it is closely monitoring an increase in new cases fuelled by the spread of the Delta variant, first identified in India, mostly among those who have not yet been fully vaccinated.

New infections on Thursday rose to more than 4000 for the first time since the end of March, a 35 per cent increase compared to the previous week.

Hospitalisations have increased by 17 per cent but the number of people dying has fallen, with Britain recording its first zero COVID-death day of the pandemic on Tuesday.

Cummings said the deaths of tens of thousands of the 128,000 people who died in Britain after contracting the virus were unnecessary.

But Hancock revealed that the government put out its first call for vaccine research in February – before Britain had recorded its first coroanvirus-related death in March, by which time it was supporting six vaccine projects. In April the government formed its vaccine taskforce, which began purchasing vaccine supplies.

Medical experts told the government that in a best-case scenario, a vaccine could be ready in 18 months, but it ended up taking just 11 months.

Hancock said the scenes depicted in the film Contagion helped shape his thinking on not just securing doses early on but how to then distribute them.

“I knew that some of the most difficult moments of the pandemic would not be before the vaccine was approved but afterwards when the scramble for vaccines had begun,” he said.

He recognised the need for a queue to make vaccine distribution fair and to ensure there was no special treatment for members of the government or the Prime Minister, who nearly died from the disease.

“Whether you’re the Prime Minister, a Premier League footballer or the future King of England, you have to wait your turn just like everyone else,” he said.

He said entrenching fairness in the rollout was more important than he or the Prime Minister taking the jab first to boost take-up. That is in stark contrast to the system in Australia, where the Prime Minister and some of his cabinet ministers had priority access to the vaccine so they could travel overseas, which Australians are largely banned from doing.

Britain is using AstraZeneca, Pfizer and Moderna vaccines and will also use the one-dose Janssen vaccine later this year.