Home » Britain faces a week of rain, hail and thunder despite warmer weather

April showers… a month late: Britain is to face a week of rain, hail and thunder as wet start to May continues – but temperatures will soar to 68F

Britain is set for a warm and sunny week with temperatures hitting nearly 68F (20C) in some areas – but the milder weather is likely to be interspersed with rain, hail and thunder.

Forecasters joked that April showers were ‘a month late’ as the Met Office predicted the South of England could see highs of 18C (64F) today, while northern regions areas are expected to reach 61F (16C).

Temperatures were already at 54F (12C) in East Anglia by 7am today on what was the first frost free morning for at least a fortnight, while the rest of the UK was also mild with the mercury between 46F (8C) and 52F (11C). 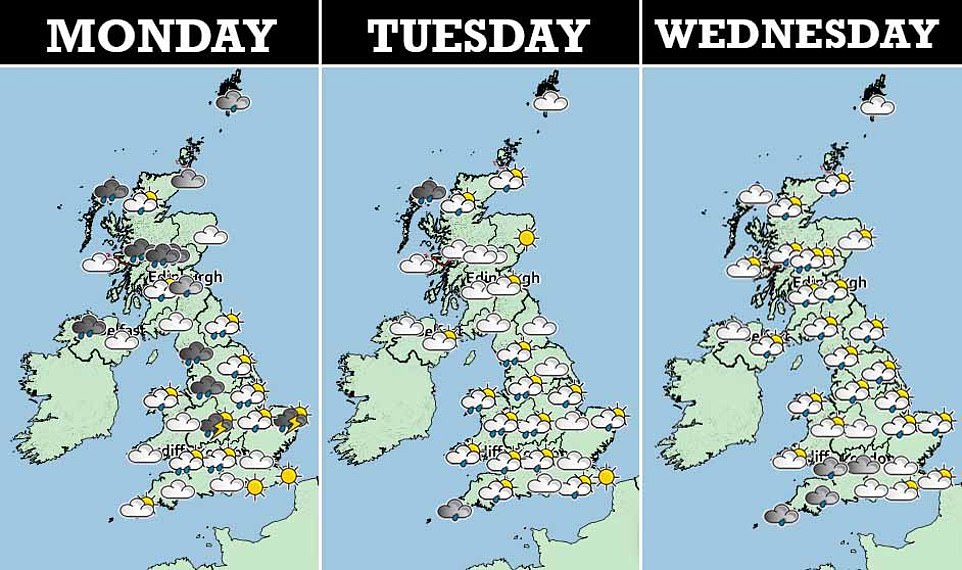 The prospect of conditions being settled after a washout Saturday has been dashed with forecasters predicting showers across England, although they will pass through quickly amid windy conditions today and tomorrow.

By Wednesday, the wind is predicted to drop, raising concerns showers could give rise to more prolonged periods of rain for some areas – while Thursday will be quite cloudy with further areas of showers likely in most places. 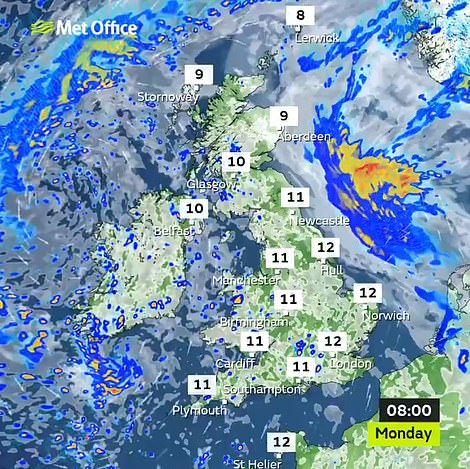 Met Office meteorologist Marco Petagna said: ‘Monday will see sunshine and showers with the South East the best place to escape the worst of the showers.

‘There are quite a few developing over the course of the morning. Temperatures are generally better than we have seen of late – we could get as good as 18C (64F) in the South East and generally 14C (57F) to 18C (64F) across England.

‘There is a similar pattern on Tuesday and Wednesday. The general theme will be sun and showers. Some may merge in some places to give us spells of rain. Temperatures will hold up around the low to mid-teens, with Tuesday breezy in the West of England.

‘By Wednesday, the winds will be a bit lower with the potential for showers to last for longer as they will be moving more slowly. There will be less frost to worry about though.’ 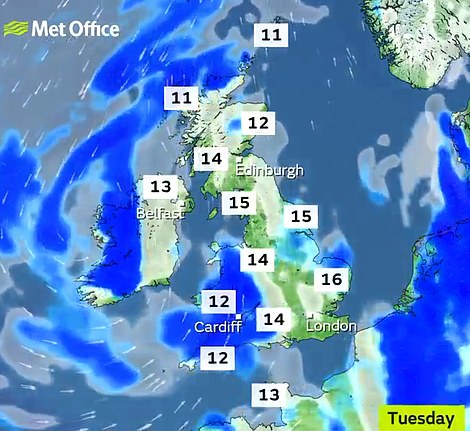 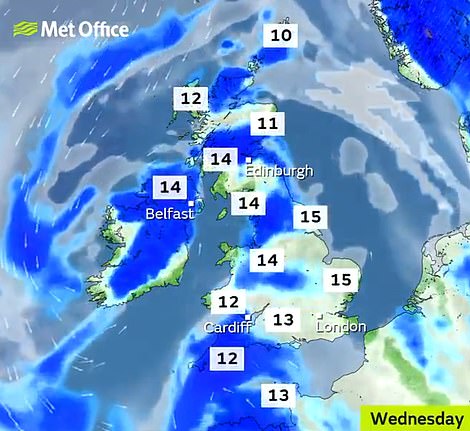 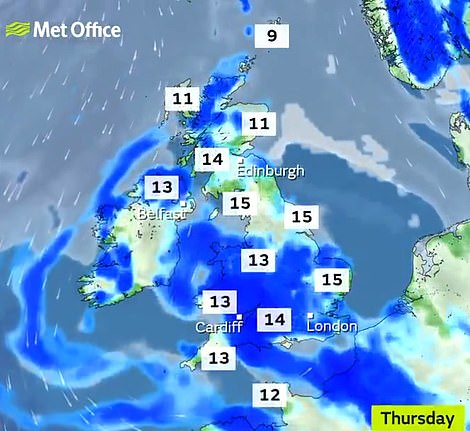 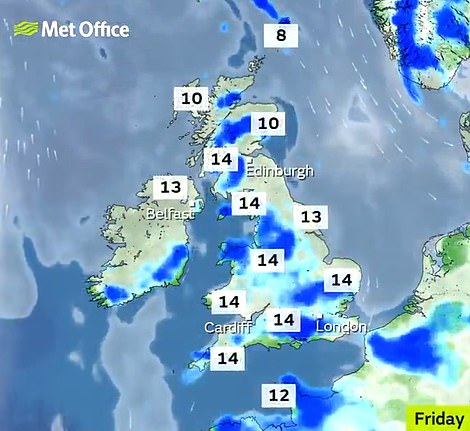 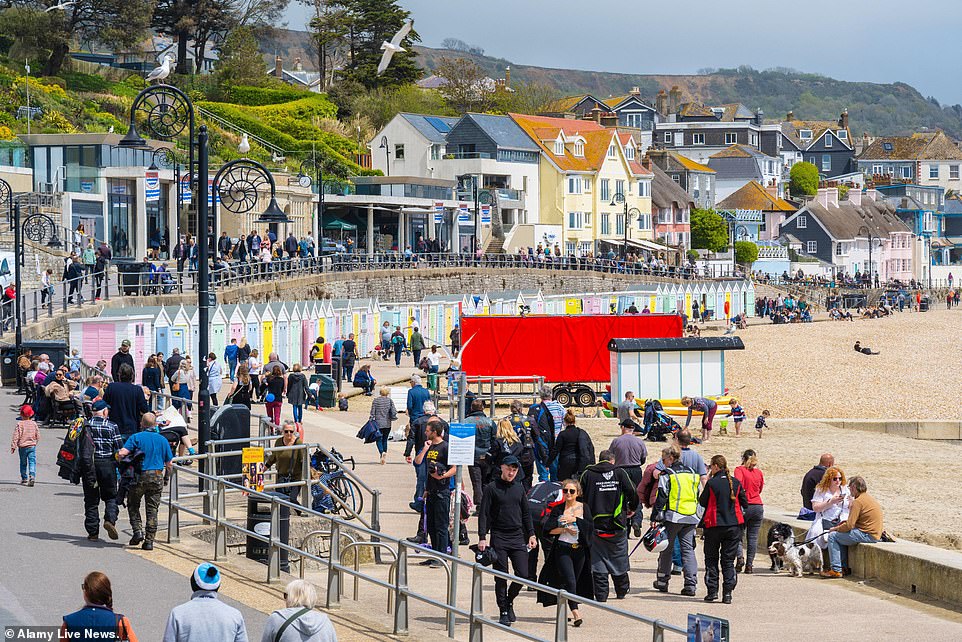 YESTERDAY: People enjoy the sunshine in the resort of Lyme Regis in Dorset yesterday as the UK welcomed warmer weather 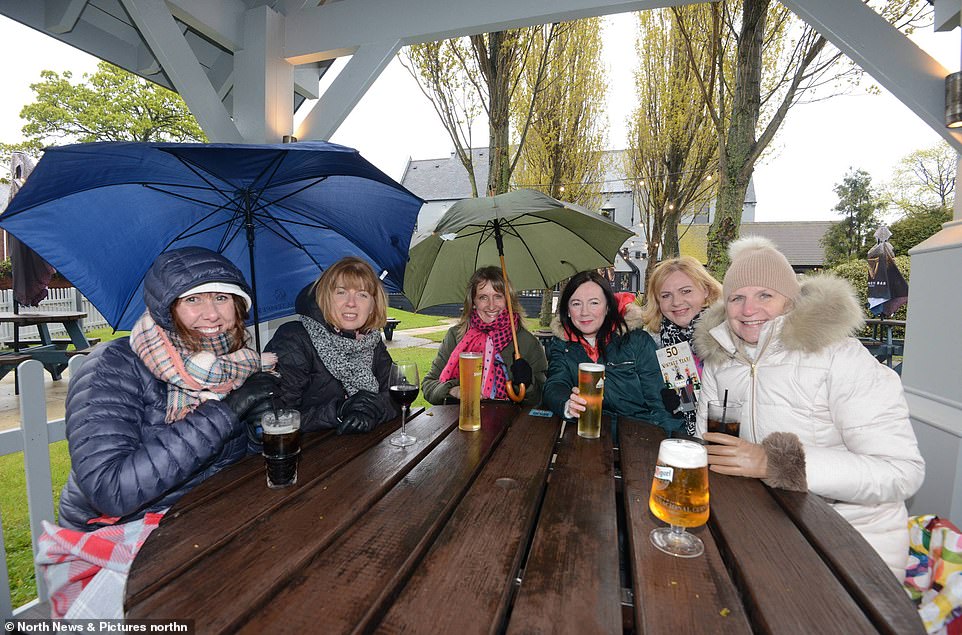 SATURDAY: A group of women enjoy a wet and windy birthday celebration in Sunderland this afternoon amid the rain

Conditions warmed up further yesterday as Santon Downham in Suffolk recorded 72.5F (22.5C) which made it the warmest day in Britain since March 31. London got up to 70.3F (21.3C) at St James’s Park.