BREAKING NEWS: Fed slashes interest rates to near zero due to coronavirus

The US Federal Reserve cut interest rates for the second time in less than two weeks on Sunday in another emergency move to help shore up the US economy amid the rapidly escalating global coronavirus pandemic.

In a statement, the central bank said it was cutting rates by to a target range of 0% to 0.25%.

‘The effects of the coronavirus will weigh on economic activity in the near term and poses risks to the economic outlook. In light of these developments, the Committee decided to lower the target range,’ the Fed said in a statement. 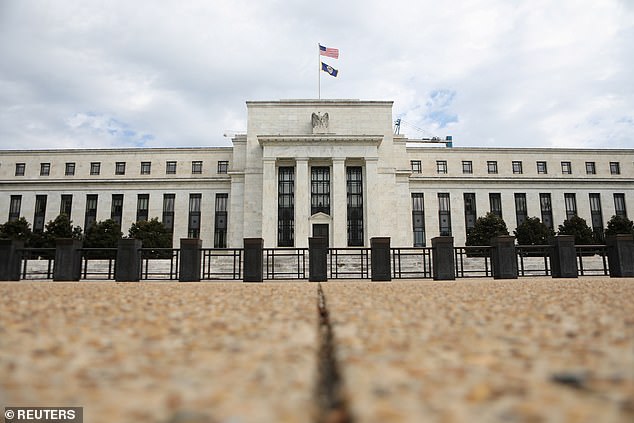 The US Federal Reserve has taken emergency action to lower interest rates to near zero over coronavirus concerns and warns of the virus’ risks to the country’s economic future. The Federal Reserve building is pictured in Washington, DC 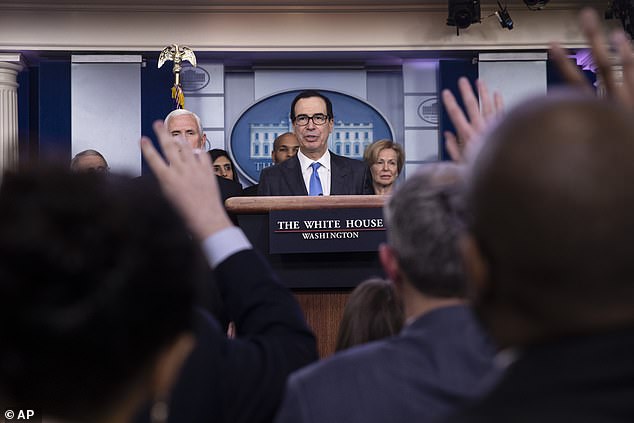 ‘The Committee expects to maintain this target range until it is confident that the economy has weathered recent events and is on track to achieve its maximum employment and price stability goals,’ the Fed said.

Earlier, Treasury Secretary Steven Mnuchin said that both the central bank and the federal government have tools at their disposal to support the economy.

Mnuchin also said he did not think the economy is yet in recession.

Most economists, however, believe a recession is already here, or will be soon.

JPMorgan Chase predicts the economy will shrink 2% in the current quarter and 3% in the April-June quarter.

‘I don’t think so,’ Mnuchin said, when asked if the U.S. is in recession. ‘The real issue is what economic tools are we going to use to make sure we get through this.’

The Fed already cut interest rates by half a percentage point on March 3 at an emergency meeting, the first rate cut outside of a regularly scheduled policy meeting since the financial crisis in 2008.

Policymakers were not due to hold their next interest-rate setting meeting until March 17-18.

So far the deadly, flu-like virus, also known as COVID-19, in the US, has infected thousands of people around the globe, 3,400 confirmed cases and 63 deaths in the US.

Businesses and schools around the nation have begun temporarily shutting down around the country as efforts are made to contain the outbreak.

The Fed said it will purchase $500 billion of Treasury securities and $200 billion of mortgage-backed securities to smooth over market disruptions that have made it hard for banks and large investors to sell Treasuries.

The disruptions bumped up the yield on the 10-year Treasury last week, an unusual move that threatens to push borrowing costs for mortgages and credit cards higher.

The Fed also said it has dropped its requirements that banks hold cash reserves in another move to encourage lending.

The Fed also announced that it has cut interest rates on dollar loans in a joint action that it has taken with five central banks overseas. That is intended to ensure that foreign banks continue to have access to dollars that they lend to overseas companies.

All told, the Fed’s actions amount to a recognition that the US economy faces its most perilous juncture since the recession ended more than a decade ago.

By aggressively slashing its benchmark short-term rate to near zero and pumping hundreds of billions of dollars into the financial system, the Fed’s moves Sunday recalled the emergency action it took at the height of the financial crisis.

Starting in 2008, the Fed cut its key rate to near zero and kept it there for seven years. The central bank has now returned that rate — which influences many consumer and business loans — to its record-low level.

Still, with the virus’ spread causing a broad shutdown of economic activity in the US, the Fed faces a daunting task. Its tools — intended to ease borrowing rates, facilitate lending and boost confidence — aren’t ideally suited to offset a fear-driven halt in spending and traveling.

‘We have to hope that the Fed getting out in front of events, not to mention other central banks, pushes the economy in the right direction,’ said Adam Posen, president of the Peterson Institute for International Economics.

‘The heavy lifting for stimulus and for preventing lasting economic damage has to be done on the fiscal side. That’s nature of this shock.’

‘It confirms that the Fed sees the economy going down … very sharply’ toward recession, Posen said.

Posen advocates fiscal steps such as providing sick leave and pay for quarantined workers and rolling over bank loans to small and medium sized businesses hit hard by the outbreak.

On Saturday, President Donald Trump reiterated his frequent demand that the Fed ‘get on board and do what they should do,’ reflecting his argument that benchmark US rates should be as low as they are in Europe and Japan, where they’re now negative. On Saturday, President Donald Trump reiterated his frequent demand that the Fed ‘get on board and do what they should do,’ reflecting his argument that benchmark US rates should be as low as they are in Europe and Japan, where they’re now negative

Negative rates are generally seen as a sign of economic distress, and there’s little evidence that they help stimulate growth. Fed officials have indicated that they’re unlikely to cut rates below zero.

With the virus depressing travel, spending, and corporate investment and forcing the cancellation of sports leagues, business conferences, music performances, and Broadway shows, economists increasingly expect the economy to shrink for at least one or two quarters. A six-month contraction would meet an informal definition of a recession.

Two weeks ago, in a surprise move, the Fed sought to offset the disease’s drags on the economy by cutting its short-term rate by a half-percentage point — its first cut between policy meetings since the financial crisis. Its benchmark rate is now in a range of 1% to 1.25%. Some analysts have forecast that the Fed will reduce its rate by just one-half or three-quarters of a point on Wednesday, rather than by a full point.

But policymakers have largely accepted research that says once its benchmark rate approaches zero, it would produce a greater economic benefit to cut all the way to zero rather than just to a quarter- or half-point above. That’s because it takes time for rate cuts to work their way through the economy. So if a recession threatens, quicker action is more effective.

Some of the attention Wednesday will likely be on what steps the Fed takes to further smooth the functioning of bond markets, a topic that can seem esoteric but that serves a fundamental role in the functioning of the economy. The rate on the 10-year Treasury influences a range of borrowing costs for businesses and consumers, including mortgage and credit card rates. If banks and investors can’t seamlessly trade those securities, borrowing rates might rise throughout the economy.

‘Even more important than the Fed’s rate-cutting function is the market-calming function,’ said David Wilcox, a senior fellow at the Peterson Institute for International Economics and former head of research at the Fed.

The central bank took a huge step in that direction Thursday, when it said it would provide $1.5 trillion of short-term loans to banks. The central bank will provide the cash to interested banks in return for Treasuries. The loans will be repaid after one or three months.

That program is a response to signs that the bond market has been disrupted in recent days as many traders and banks have sought to unload large sums of Treasurys but haven’t found enough willing buyers. That logjam reduced bond prices and raised their yields — the opposite of what typically happens when the stock market plunges.

The Fed also said last week that it would broaden its $60 billion monthly Treasury purchase program, launched last fall, from just short-term bills to all maturities. The Fed is already reinvesting $20 billion from its holdings of mortgage-backed securities into Treasuries of all durations, thereby bringing its total purchases to $80 billion.

Those purchases would help relieve banks of the Treasuries they want to sell. Some analysts expect the Fed to extend those purchases past their current end-date of the second quarter and even vastly increase the size.

Guy LeBas, chief fixed income strategist for Janney Capital Management, said the Fed could boost its purchases to up to $1 trillion or more over the next year. The goal wouldn’t be to directly stimulate the economy, as the Fed did with its bond purchases during and after the recession, LeBas said. Those purchases were known as ‘quantitative easing’ or QE.

Rather, the idea would be to take more Treasuries off banks’ balance sheets. That, in turn, would boost banks’ cash reserves and enable them to lend more. Still, most economists would likely refer to the purchases as QE.

Another option would be to relaunch a program that lets banks use corporate bonds and other securities as collateral to borrow from the Fed.

On Wednesday, the Fed’s policymakers will also update their forecasts for the economy and for interest rates. Economists at Pimco predict that the Fed’s policymakers will collectively downgrade their estimate for growth this year from 2% to below 1.5%. That figure would be consistent with an economic contraction in the first half of the year, followed by a sharp rebound, Pimco said.