‘Schools WILL reopen on March 8’: Downing Street refuses to delay restart of face-to-face teaching despite fears over Brazilian coronavirus strain in the UK as Boris Johnson says his roadmap is ‘going at the right pace’

Downing Street confirmed today that schools will reopen on Monday, despite fears over a Brazilian strain of coronavirus that has been found in Britain.

Six cases of the P.1 variant first detected in the Amazonian city of Manaus have been confirmed in the UK – three in England and three in Scotland.

Two were tracked to South Gloucestershire but the third English case has not been located and could be anywhere in the nation because they failed to fill in personal details when they were tested for Covid.

Experts believe that the Brazil strain can sidestep existing antibodies to some degree, potentially raising questions about the effectiveness of current jabs.

The Prime Minister’s roadmap out of lockdown is due to begins with the return of schools in a week’s time, before a raft of carefully staggered easing of restrictions in the coming months.

Mr Johnson’s official spokesman today said that the school restart would not be delayed, but would not rule out closing some schools in South Gloucestershire if necessary.

‘Schools will open from Monday next week. But also as I have said we have deployed the extra surge testing in Gloucestershire to ensure that if there are any other cases in the local area we can identify them and ensure those people are isolating.’ he said.

Meanwhile on a visit to a school in Stoke this morning Mr Johnson  said he still expected the road map for easing England’s restrictions would be irreversible. 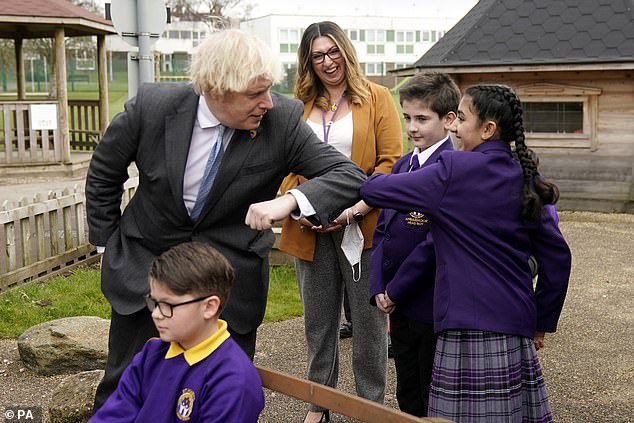 The Prime Minister’s roadmap out of lockdown is due to begins with the return of schools in a week’s time, before a raft of carefully staggered easing of restrictions in the coming months. 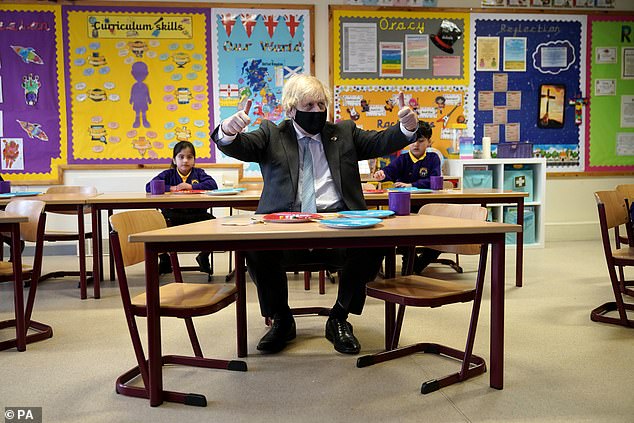 Mr Johnson’s official spokesman today said that the school restart would not be delayed, but would not rule out closing some schools in South Gloucestershire if necessary. Mr Johnson was at a school in Stoke today (pictured)

WHAT DO WE KNOW ABOUT THE BRAZIL VARIANT?

Why should we care? The variant has the same spike protein mutation as the highly transmissible versions found in Kent and South Africa – named N501Y – which makes the spike better able to bind to receptors inside the body.

It has a third, less well-studied mutation called K417T, and the ramifications of this are still being researched.

What do the mutations do?

The N501Y mutation makes the spike protein better at binding to receptors in people’s bodies and therefore makes the virus more infectious.

Exactly how much more infectious it is remains to be seen, but scientists estimate the similar-looking variant in the UK is around 56 per cent more transmissible than its predecessor.

Even if the virus doesn’t appear to be more dangerous, its ability to spread faster and cause more infections will inevitably lead to a higher death rate.

Another key mutation in the variant, named E484K, is also on the spike protein and is present in the South African variant.

E484K may be associated with an ability to evade parts of the immune system called antibodies, researchers from the Federal University of Rio de Janeiro said in a scientific paper published online.

However, there are multiple immune cells and substances involved in the destruction of coronavirus when it gets into the body so this may not translate to a difference in how people get infected or recover.

Do our vaccines work against it?

There are concerns that vaccines might be less effective against the Brazilian strain, with trials of the Johnson & Johnson jab finding it was slightly less effective in Latin America at preventing mild or moderate cases.

However, the trials found it still prevented hospitalisations and deaths.

He told reporters at a school in Stoke-on-Trent: ‘What we are doing is embarking now on a journey, a one-way road map to freedom and it is designedly cautious in order to be irreversible.

‘I think we are going at the right pace, education is the priority, getting all schools open on March 8 is something that we have set our hearts on for a long time and I am confident we will be ready.’

Mr Johnson defended the testing regime for schools, insisting ‘people do understand how to use them and we are very confident that they will be of use in helping to keep the disease under control, keep it going down as we get schools back open’.

Earlier, vaccines minister Nadhim Zahawi appealed for anyone who was tested on February 12 or 13 and has not received a result, or had an incomplete test registration card, to come forward.

It is possible the individual may not even know they were ill, with speculation it was either a home testing kit or part of ‘surge’ screening.

Scientists have raised alarm that if the variant takes hold in the UK it could ‘slow things down’ in the fight to escape lockdown restrictions as it makes vaccines ‘so much less potent’.

And the government is facing questions over why it did not act earlier to tighten up the borders – with warnings that foreign holidays will not be possible this summer.

Labour leader Sir Keir Starmer said ministers were too slow, while the Welsh First Minister said the UK should be ‘building the walls higher’ rather than preparing to resume international travel.

One of the P1 cases, found in South Gloucestershire, flew into London from Brazil via Zurich on February 10 – only five days before arrivals from there became required to quarantine in a hotel for ten nights.

Officials are also tracking down 136 passengers on Swiss Air flight, LX318 travelling from Sao Paulo, through Zurich, and landing in Heathrow on February 10.

‘In terms of its profile, this P.1 variant is much closer to the South African variant, which we’ve been dealing with now for several weeks by surge testing, genome sequencing and isolation,’ he told Sky News.

‘This variant is a variant of concern, it is very similar in terms of its mutations to the South African variant. So, it is concerning.’

On the two cases identified in South Gloucestershire, Mr Zahawi said one had travelled from Sao Paulo through Zurich to London prior to the hotel quarantine.

‘They did take a pre-departure test and filled in their passenger locator form, which is why we are able to deal with them so effectively and work with South Gloucestershire Council,’ he said.

‘There is minimal reason to believe that there may be further spread because they have been isolating correctly.

‘But we will be doing asymptomatic testing in South Gloucestershire.’