Metro Tunnel’s builders are preparing to remove massive tunnelling machines and extract them from underground after they finished excavating twin nine-kilometre rail tunnels beneath Melbourne.

The construction milestone comes five months after the the Andrews government and the project’s builders — the Cross Yarra Partnership — agreed to split the cost of a $2.7 billion blowout on the project, pushing the $11 billion price tag to $14.7 billion. 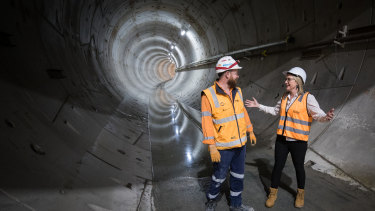 Speaking at a press conference held underground at what will be the future State Library station, Transport Infrastructure Minister Jacinta Allan said the tunnels linking South Kensington and South Yarra would deliver trains to Parkville and Arden for the first time.

Ms Allan said she was hopeful the project would be open to the public by 2024 — a condition of the deal she struck with the project’s builders to cover the nearly $3 billion blowout.

But 2025 remains the project’s expected completion date, which is ahead of the original 2026 deadline.

More than half of the project’s construction works are complete.

“We’re marking the end of the tunnel-boring machine work … I want to acknowledge the skills and expertise of the workforce who worked so incredibly hard to achieve this big and important milestone on the Metro Tunnel project,” Ms Allan said.

“It’s been more than 30 years since we’ve had this sort of investment in Victoria’s train network.”

The Andrews government agreed to pay an extra $1.37 billion on the project under a deal struck with the project’s building consortium, comprising Lendlease, John Holland, Bouygues Construction, John Laing and Capella Capital in December last year. It came after the builders sensationally stopped tunnelling in late 2019, in a bid to force the government to pay for the project’s cost overruns.

When asked whether she could rule out further blowouts on the project, Ms Allan said: “Projects of this size and complexity always come with challenges. This project to date has gone incredibly well with the tunnel-boring machine part of the project.”

By the end of the year, 26 cross-passages are scheduled to be excavated by roadheader machines.

By late 2024, the tunnels should be equipped with electrical and signalling services, the stations are to be built and the trains must undergo thorough testing through the tunnels.

Rail Projects Victoria chief executive Evan Tattersall said once the trains’ signalling and electrical systems were built into the tunnels, this would start a “massive body of work” involving testing of the trains.

He said there would be “thousands of iterations for the trains running through the tunnels in all sorts of configurations”.

Tunnelling started in August 2019 and dug out an average of 90 metres a week, digging as deep as 40 metres below ground under the northern end of Swanston Street.

The 6.3-metre-high rail tunnels are lined with around 250,000 tonnes of concrete.

The machines removed 1.8 million cubic metres of rock and soil – enough to fill the MCG 1.2 times.

The ‘skin’ of each tunnel-boring machine will remain in the tunnel to form part of the permanent lining while other components will be recycled for other projects.

On top of the blowouts, a quarter of its projects worth more than $100 million are not being built within their expected deadline.