For months, Turkish fishermen in the Sea of Marmara have been running into a problem: they can’t catch fish.

That’s because a thick, viscous substance known colloquially as “sea snot” is floating on the water’s surface, clogging up their nets and raising doubts about whether fish found in the inland sea would actually be safe to eat.

Scientists say that the unpleasant-looking mucus isn’t a new phenomenon, but rising water temperatures caused by global warming may be making it worse. Pollution – including agricultural and raw sewage runoff – is also to blame. 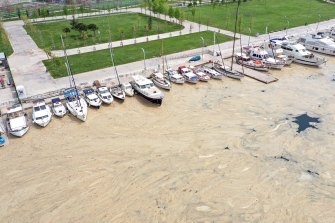 A drone view of a thick layer of mucus – known as ‘sea snot’ – on a harbour in Istanbul.Credit:Getty

As numerous Turkish news outlets have reported, high levels of nitrogen and phosphorus in the Sea of Marmara are leading to an explosion of the phytoplankton populations that discharge “sea snot”. Though the mucus itself isn’t necessarily harmful, it can become a host to toxic micro-organisms and dangerous bacteria such as E. coli. And when it forms a layer that covers the water’s surface, it can set off a harmful chain of events, suffocating fish, causing mass die-offs, which in turn leads to plummeting oxygen levels that choke other forms of marine life.

In April, marine biologists discovered that the mucus could be found blanketing corals on the sea floor nearly 100 feet below the water’s surface, Turkish newspaper Cumhuriyet reported.

The problem has become harder to ignore in recent weeks as Istanbul’s coastline begins to resemble a beige carpet, but fishermen who rely on the sea to make a living have been sounding the alarm for months.

One told Cumhuriyet that he has been unable to work since January because the mucus was rendering his nets useless. A diver who hunts sea snails for a living told Turkey’s state-run Anadolu Agency that he had lost most of his income because the visibility was so poor underwater, and that crabs and sea horses were dying because the slimy mucus was clogging their gills. 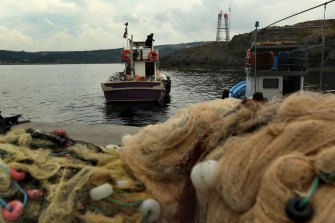 Turkish fishermen say the mucus is killing off the fish and affecting their livelihoods. Credit:Kate Geraghty

Though first observed in Turkey in 2007, sea snot appears to have periodically plagued the Mediterranean Sea since the 18th century, Ozgur Bayt, a lecturer in hydrobiology at Ondokuz Mayıs University, told BirGun. What is “not normal,” he said, is how frequently it now shows up along Turkey’s coast.

Since phytoplankton thrive in warmer waters, scientists suspect that climate change may be a factor. But experts have also pointed out that untreated waste and agricultural runoff pour directly into the Sea of Marmara, and cracking down on those sources of pollution would help to reduce nitrogen and phosphorus levels.

Officials in Istanbul, which sits on the Sea of Marmara, announced earlier this month that they were collaborating with the Turkish government and Bandirma Onyedi Eylul University to come up with a solution to the crisis, which may involve bringing in boats to dredge the sea floor.

Ismet Cigit, a columnist for the newspaper Ses Koceli, lamented that humans had “betrayed this world’s most beautiful sea” by allowing chemical storage facilities, fuel tanks, factories and other industrial sites to be built along the coast.

“Clearly, there are no deterrent penalties for those who pollute the sea,” he wrote in Turkish, adding, “Marmara is dying.”