The reputed birthplace of Jesus has been shut over coronavirus fears while Hinduism’s Holi festival is being scaled back and Iran is urging people to avoid using cash in a fresh round of public health measures today.

The Nativity Church in Bethlehem, where Christians believe Jesus was born, will close indefinitely from 4pm today after suspected virus cases emerged in the town.

The news is a blow to tens of thousands of worshippers who were expected to descend on the church for Easter next month.

Meanwhile, Indian PM Narendra Modi and other Hindu leaders say they will not attend Holi festival celebrations on March 10.

The colourful spring festival in which Hindus smear each other’s faces with red and yellow powders has drawn concern from health authorities who fear it could help the virus to spread. 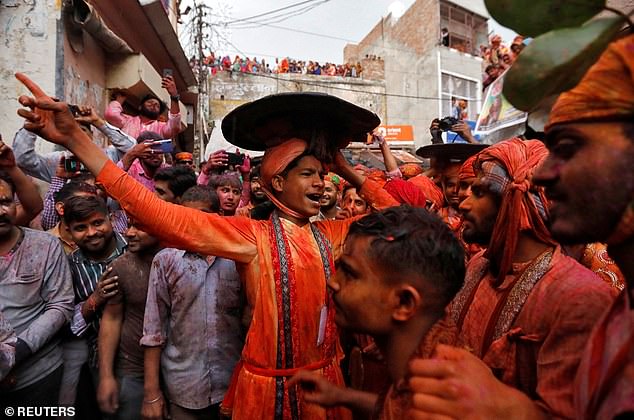 A crowd of people daubed in vibrant colours celebrate Holi in the town of Barsana, northern India, yesterday amid fears that the festival could help spread coronavirus

Hindu leaders are advising people to exercise restraint at Holi, where people usually spray each other with squirt guns and colour each other with water-filled balloons.

The vibrant festival is widely popular in India, Nepal and countries with Indian migrant populations.

Modi tweeted that he would not celebrate Holi while experts have advised people to reduce mass gatherings to avoid the spread of the virus.

The message is reaching community leaders who are canceling street celebrations as well large gathering of people in condominiums.

In Bethlehem, the Nativity Church which is build on the spot where Jesus was reputedly born is due to close this afternoon after being disinfected.

Jeres Qumsiyeh, a spokesman for the Palestinian tourism ministry, said the church would be closed ‘until further notice’.

All tourists have been barred from entering the West Bank, after four suspected coronavirus cases were found in Bethlehem, authorities said.

Most tourists to the West Bank visit Bethlehem and its fellow biblical city of Jericho. 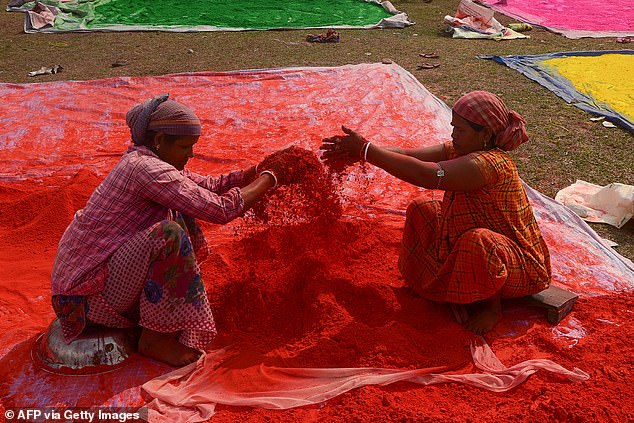 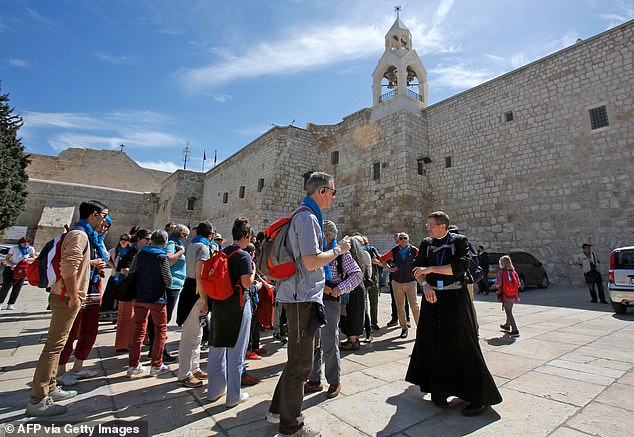 Foreign tourists visit the Church of the Nativity, revered as the birthplace of Jesus, in Bethlehem today just hours before the site is due to close

Meanwhile in Iran, the country’s health minister Saeed Namaki urged people to reduce their use of cash to stop the spread of the virus.

Saeed Namaki made the announcement at a news conference where he also revealed that schools and universities will remain closed until at least March 20, which is Persian New Year.

In addition, Namaki said authorities will begin manning checkpoints to limit travel between major cities in the Islamic Republic.

He said people should stay in their vehicles at gas stations and allow attendants to fill their gas tanks to avoid the spread of the virus.

Iran has been heavily criticised for its response to the crisis after refusing to shut down holy cities even as Shi’ite pilgrims spread the virus across the Middle East.

The regime’s official figures show 2,922 confirmed cases and 92 deaths, although there has been suspicion that Tehran is covering up the true scale of the crisis.

Iran has also been facing shortages of face masks and other medical equipment, worsened by U.S. sanctions.

The country has also cancelled Friday prayers in major cities including Tehran.

The UAE today warned its citizens and its foreign residents not to travel anywhere abroad amid the ongoing worldwide coronavirus outbreak, a stark warning for a country home to two major long-haul airlines. 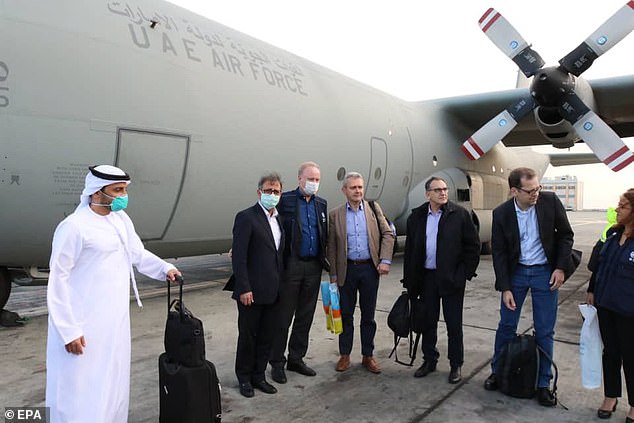 The warning from the UAE’s health and community protection ministry comes as the capital Abu Dhabi, sent 215 foreigners it evacuated from Hubei into quarantine.

They include citizens of Egypt, Sudan and Yemen.

Health officials warned that those traveling abroad could face quarantine themselves at the discretion of authorities.

The UAE is home to some nine million people, with only about one million estimated to be Emirati citizens.

It is also home to Emirates, the government-owned airline based at Dubai International Airport, the world’s busiest for international travel.

Abu Dhabi also is home to Etihad, the country’s national carrier. Both airlines have encouraged staff to take time off because international travel has dropped due to the virus.

The umrah – which, unlike the hajj, can be undertaken at any time of year – draws millions of Muslim pilgrims to Saudi Arabia every year.

But the Gulf state yesterday decided to ‘suspend umrah temporarily for citizens and residents in the kingdom’, official media said.

Visitors are also barred from ‘visits to the Prophet’s mosque in Medina’, the foreign ministry said.

Saudi Arabia on Monday confirmed its first case of the new coronavirus after one its citizens who had returned from virus hotspot Iran tested positive.