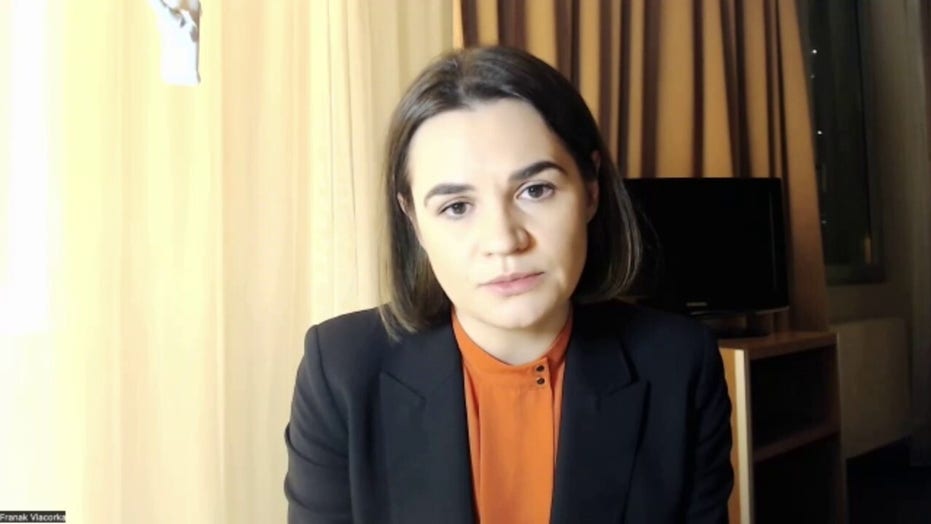 Leader of Belarus opposition: ‘This is a war between freedom and dictatorship’

Belarus’ entry into the war could have broader implications in the Ukraine-Russia conflict, especially if Russian-commanded Belarusian troops enter through western Ukraine amid fears that the fighting could either purposely or unintentionally spill over the border into Poland, a member of NATO.

In a video message Tuesday, Belarus’ exiled opposition leader argued that Belarus President Alexander Lukashenko, a close ally and friend of Putin, “has already committed high treason” by allowing thousands of Russian troops to stage in Belarusian territory before invading Ukraine on Feb. 24.

Sviatlana Tsikhanouskaya, forced to flee Belarus amid widespread protests and military crackdown after the highly contested 2020 presidential election, directly appealed to members of the Belarus military, as well as their wives and mothers, for soldiers to oppose any “criminal order” to invade Ukraine.

“The invasion of Ukraine by the Belarusian army is a step with irreversible ramifications,” Tsikhanouskaya said. “It would be a shameful stain on relations with the Ukrainian people and would further isolate Belarus from the rest of the world, right up to the Iron Curtain, behind which Belarus would not be seen as an independent state, and life in the country would descend into poverty.”

“The order to introduce troops into Ukraine is not only an order to send them to certain death, it is also an order to all Belarusians to give up their independence and their future,” she said from abroad. “Despite the Russian propaganda, the attitude of the Belarusian society to the war is very different from the Russian one. The absolute majority of Belarusians, regardless of their political preferences, are unequivocally against the war with Ukraine or any war involving Belarus.”

Last month, Belarus passed a referendum renouncing its non-nuclear status, clearing the way for nuclear weapons to be transported from Russia and again be housed on Belarusian soil for the first time since the nation gave them up at the fall of Soviet Union, according to Reuters. The West refused to recognize the vote as legitimate during Belarus’ crackdown on domestic opponents. In response, Lukashenko said if allied countries “transfer nuclear weapons to Poland or Lithuania, to our borders, then I will turn to Putin to return the nuclear weapons that I gave away without any conditions.”

In recent days, Belarusian railway workers coordinated an effort to sabotage railway lines to prevent the flow of supplies to Russian troops in Ukraine, according to Ukrainian railway officials.

A Belarusian group of hackers and activists known as the Belarusian Cyber-Partisans also reportedly hurled ransomware attacks at their country’s railway system to jam operations, calling Lukashenko a “terrorist” for allowing Russian “occupying troops” into Belarus and Ukraine.

As Russian forces suffered heavy casualties since the invasion began 28 days ago and their ground effort has largely stalled, Ukraine’s Ministry of Defense warned this weekend that Belarus was plotting a “direct invasion” into western Ukraine through the Volyn region, assessing the risk level as highly likely.

The General Staff of the Armed Forces of Ukraine said as of Wednesday that no movement of Belarusian troops has been detected in the Volyn region of western Ukraine, but Lukashenko still maintained a “significant group of troops” near the border. Ukrainian Member of Parliament Lesia Vasylenko lamented Wednesday that while Belarus was preparing to invade Ukraine, the Inter-Parliamentary Union, which promotes democratic governance, still allowed Belarusian members of parliament on the drafting committee for a resolution on Ukraine, arguing there’s been no aggression on behalf of Belarus.

Tsikhanouskaya said any member of the Belarus military, regardless of their rank, who follows orders to invade Ukraine will be brought before a military tribunal and be prosecuted alongside Lukashenko for war crimes, while soldiers who refuse orders and lay down their arms won’t be held criminally liable. She also claimed that any Belarusian soldiers who abandon battlefield or surrender in Ukraine would escape punishment.

“We are receiving information about a possible invasion of Ukraine by the forces of Belarus, and so I appeal to the Belarusian military: We know that most of you are also against war with Ukraine,” she said. “Don’t let the Belarusian Armed Forces lose the trust and respect of the Belarusians for good. Also, I appeal to the mothers and wives of military personnel: Do everything you can to make sure your sons and husbands come home. Don’t let the regime take them away from you forever.”

Belarusa’s Foreign Ministry announced Wednesday that it was expelling Ukrainian diplomats and closing a consulate, though spokesman Anatoly Glaz didn’t specify how many diplomats would have to leave and said a maximum of five could remain. Glaz said, “This step is aimed at ending the undiplomatic activities of several staff of the Ukrainian foreign missions.”

Earlier this month, Belarusian Major General Viktor Gulevich reportedly resigned as Chief of the General Staff and First Deputy Minister of Defense, refusing to organize Belarusian troops to participate in the hostilities committed by the Russian forces in Ukraine. He had already been sanctioned by the U.K. government for allegedly aiding and abetting the Russians in their invasion of Ukraine last month.

Lukashenko, commander in chief of the former soviet republic since coming to power in 1994, claimed an overwhelming victory in the 2020 presidential election despite widespread allegations of voter fraud. Tsikhanouskaya’s husband was arrested in the months leading up to the election, so she decided to run in his place in protest. As tens of thousands of protesters were being arrested, she fled to Lithuania to join her two young children in exile. Lukashenko was subsequently inaugurated for a sixth term.