Australia’s collective history is multi-layered, with proud stories and darker undercurrents intertwined with our national identity. Like most countries the world over, there is no single defining feature that captures the essence of being Australian. As we pause to recognise Australia Day again this year, many of us will ponder exactly what it is that we commemorate on January 26.

The date itself is the anniversary of the landing of 11 British ships at Sydney Cove and the arrival of more than 1500 convicts, settlers and administrators to found a new colony. But January 26 represents just one chapter of a more complex narrative that begins with 65,000 years of occupation by Aboriginal and Torres Strait Islander people, includes federation and the bringing together of colonies, and continues with our embrace of diverse streams of ambitious migrants. 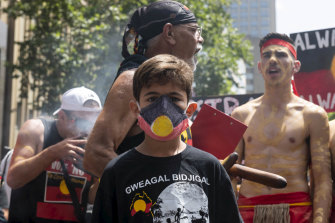 An Invasion Day march in Sydney on January 26, 2020.Credit:Rhett Wyman

One of Australia’s most prominent Indigenous leaders, Noel Pearson, has eloquently described our national heritage as comprising three parts, “our ancient heritage, our British inheritance and our multicultural triumph”.

In an extended essay in 2014, Mr Pearson declared Australia was “on the cusp of bringing these parts of our national story together”, a union that he suggested would come through constitutional recognition of Indigenous people.

We remain on that cusp. Reconciling the diverse strands of this nation is a multi-generational, painfully slow and frustrating process.

In time, the process of debate may effortlessly generate a new date for marking Australia Day, one that is less controversial for Indigenous people and one that better represents the extraordinary diversity of the nation, not just its convict and British colonial history.

For now though, it seems Australians are mostly ambivalent about whether the date should be changed. An Ipsos poll for The Age/The Sydney Morning Herald and Nine News indicates only 28 per cent support for some other date, although half of the 1222 people surveyed believe Australia Day will change within the next decade.

There is ample room for an argument to change the date and it seems a majority of Australians believe that will inevitably occur. The Age agrees that as public moves shift both with increased debate and generational support, this is likely.

But first we must have a longer conversation about how best to encapsulate the multiple aspects of our heritage and what date might work as a “celebration”, in the real sense of the word. We cannot change the date without overwhelming majority support for its replacement.

In 1994, when Australia Day was fixed to January 26, then-prime minister Paul Keating suggested the view each of us might form of our nation depended on individual perspectives and opportunities.

If Australia is to become as Noel Pearson argued, a “more complete commonwealth” by reconciling the three parts of the nation’s heritage, then we must work together to define our national identity with full respect to our past, present and future.

Note from the Editor

The Age’s editor, Gay Alcorn, writes an exclusive newsletter for subscribers on the week’s most important stories and issues. Sign up here to receive it every Friday.