Home » World News » ‘AstraZeneca is safe’: Australia not concerned by reports of blood clots in Europe

Prime Minister Scott Morrison said he is not worried by news that some European countries have temporarily suspended the use of the AstraZeneca COVID-19 vaccine after reports of blood clots in a handful of people who received doses from the same batch of the vaccine.

Asked if Australia should pause its AstraZeneca rollout in line with Denmark, Norway and Iceland, Mr Morrison said “No, that is not the view of our medical advisors”. 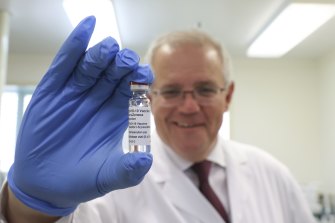 “The AstraZeneca COVID-19 vaccine is effective, it is safe, and it’s a high-quality vaccine,” Professor Kelly said.

“Safety is our first priority and in a large vaccine rollout like this, we need to monitor carefully for any unusual events so we will find them. This does not mean that every event following a vaccination is caused by the vaccine.

“But we do take them seriously and investigate,” he said.

Professor Kelly said the Australian health authorities had spoken with their European counterparts overnight, including the EMA, UK and Danish authorities.

“The action taken by several European countries is a precautionary measure so that a full investigation can be rapidly conducted,” he said. He stressed that more than 11 million people vaccinated in the UK without evidence of an increase in blood clots.

Iceland suspended shots with the vaccine as it awaited the results of an investigation by the EMA. Italy said it would suspend use of an AstraZeneca batch different to the one used in Austria.
But several other European countries, including Sweden, France and Spain have continued using their AstraZeneca vaccines, deeming there to be no indication that the vaccines caused the blood clots.

The batch of 1 million doses went to 17 EU countries.

Stephen Evans, professor of pharmacoepidemiology at the London School of Hygiene & Tropical Medicine said the response from Denmark, Iceland and Norway was “super-cautious” based isolated reports.

“The problem with spontaneous reports of suspected adverse reactions to a vaccine are the enormous difficulty of distinguishing a causal effect from a coincidence,” he said, adding that the COVID-19 disease was very strongly associated with blood clotting.

AstraZeneca on Thursday said in a written statement that the safety of its vaccine had been extensively studied in human trials and peer-reviewed data had confirmed the vaccine was generally well tolerated.

Get our Coronavirus Update newsletter

Stay across the news you need to know related to the pandemic. Sent Monday and Thursday. Sign up here.