Furious locals in St Ives, Cornwall have written messages on the beach urging second home owners to go home amid the coronavirus pandemic.

Londoners and people living in big cities all over the UK are flocking to the seaside and their second homes to escape the virus, drawing the ire of locals.

The government have urged people not to head to the countryside, with fears that they could be spreading the virus throughout the nation.

Residents of St Ives in Cornwall have gone a step further, scrawling a series of messages into the sand on the beach demanding that tourists go home.

However, despite their pleas, government commands and Boris Johnson imposing a UK-wide lockdown, second homers are remaining defiant and continuing to flock to the countryside in their droves. 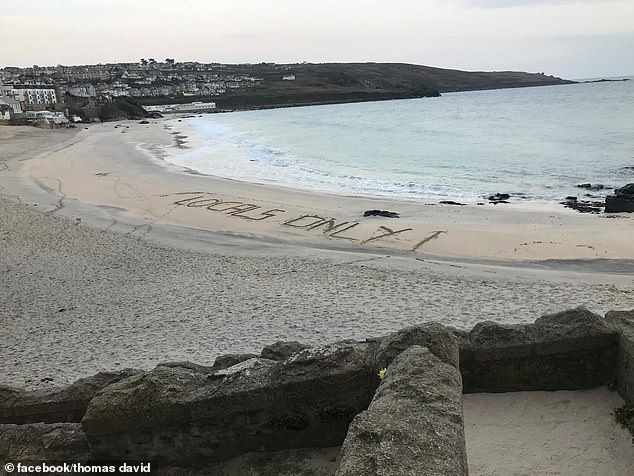 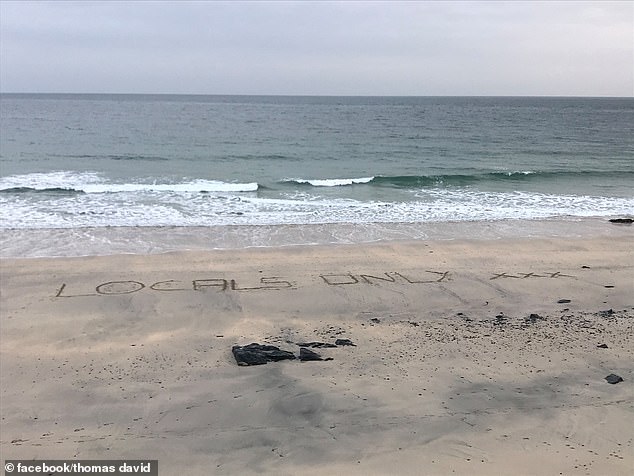 The government have urged people not to head to the countryside, with fears that they could be spreading the virus throughout the nation 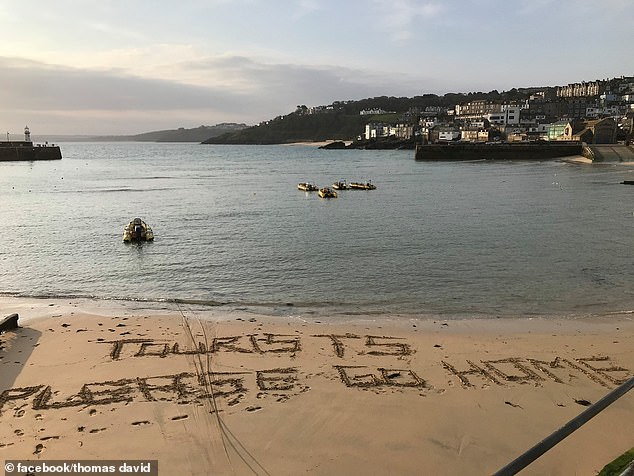 Though second homers are remaining defiant, local anger towards the mass exodus is clear

One of those is Alice Townsend, 52, a physiotherapist who moved to her second home in Northumberland from south London with her husband and three children.

She told the Times: ‘We are in the middle of nowhere here. We thought with three children and two dogs it made sense. We can be outside and not infect anyone else.

‘I get that some people might see that as selfish but we thought it was practical.’

A second homeowner, from west London, decided to move to her Suffolk cottage with her husband as soon as rumours of a lockdown first started.

She insisted that her and her husband haven’t heard any backclash, despite the fury on social media.

The woman, who wanted to remain anonymous, added: ‘We weekenders are quietly having our own backlash. Like the rest of the country, we are tired of being fed ambiguous advice that changes day by day, and most of all we resent being told we should not go to our own homes, where we pay our council tax, like every other resident.’

Henry Sherwood, a property buying agent from southwest London who has moved to his second home in Wantage, Oxfordshire, also insists that he has not faced any hostility over his move.

However, people all over the country remain furious at Londoners and people from big cities fleeing to the countryside.

One social media user commented: ‘If Londoners and Middle Englanders could kindly keep away from their second homes in Suffolk and Norfolk, that would be appreciated.

‘Stop spreading the virus. You don’t need to be here.’ 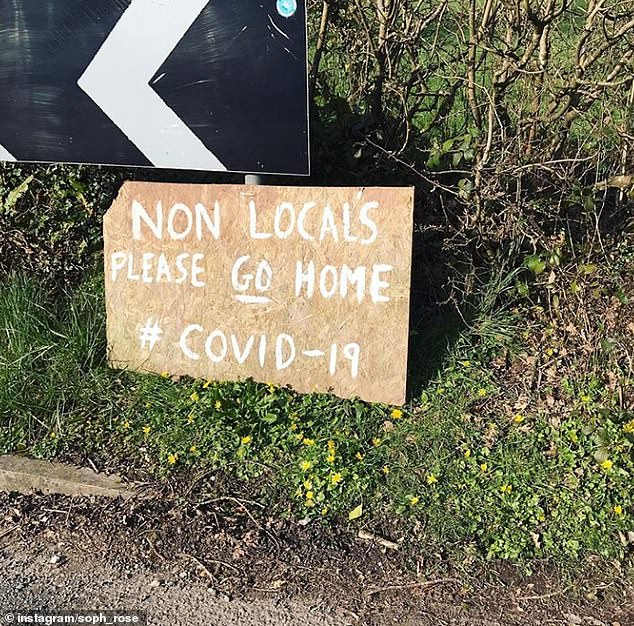 Countryside dwellers are blasting city residents who are fleeing places like London for idylic retreats (pictured, one person erected a sign on a roadside near Pembrokeshire) 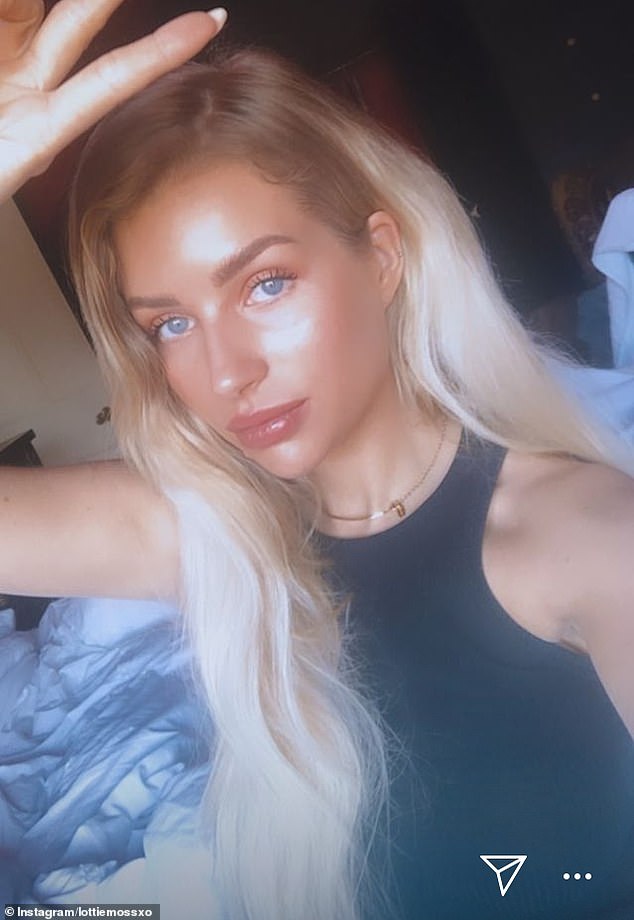 Socialites are escaping London and heading to the country to enjoy isolation in idyllic rural areas (pictured, Lottie Moss, who was pictured leaving the capital on Wednesday and is now relaxing in a countryside retreat)

Another angry person wrote: ‘Why is it always London? Plenty of rich Londoners now in their second homes, or holidaying in Wales Cornwall. Places with very little resources. Selfish lot.’

Another added: ‘Our village in the Cotswolds was full of Londoners escaping the city.

‘In 10 years we have never seen it so busy. People coming to their second homes, bringing their friend.

‘Irresponsible idiots, who should be locked up to save the rest of us from them.’

Among those who have left their London homes to self isolate elsewhere included Kate Moss’ little sister Lottie.

The socialite and model was snapped leaving her home in London on Wednesday last week, and has since been sharing pictures on her Instagram page as she picked flowers in a countryside location. 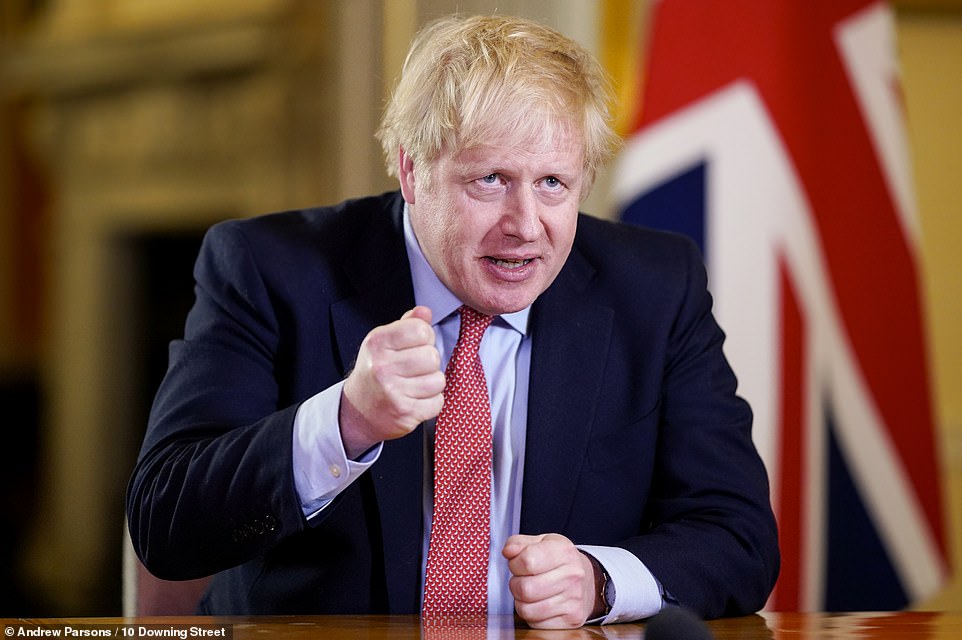 She revealed she was currently ‘with family’ in the location earlier today.

Meanwhile influencer and fashion blogger Lizzy Hadfield also revealed she had left London for her native Yorkshire over the weekend.

She posted pictures online as she enjoyed a countryside walk on Ilkley Moor amid the coronavirus outbreak across the country.

It comes as Britain’s 66million people are today beginning a new life in coronavirus lockdown after Boris Johnson ordered the immediate closure of all non-essential shops and threatened people with fines or even arrest if they do not ‘stay at home’.

The Prime Minister’s shutdown will last for a minimum of three weeks and the UK’s new state of emergency is unprecedented in modern history.

Gatherings of more than two people will be banned in the most dramatic curbs on freedom ever seen in Britain in time of peace or war, as the government goes all out to stop the spread of the killer disease, which has claimed 335 lives in the UK.