The relieved Americans were elated to walk into the arrival hall at Logan with their luggage after making a mad dash to European airports, where travelers were eager to fly home after Trump’s edict.

The president issued his ban earlier this week in an effort to curb the spread of coronavirus.

Weary and confused travelers, many wearing face masks, rushed to board flights from European airports to the US on Thursday after Trump announced the new travel restrictions.

His 30-day travel order applies to citizens of 26 European countries but excludes Britain and Ireland as well as American citizens.

It takes effect from midnight on Friday. 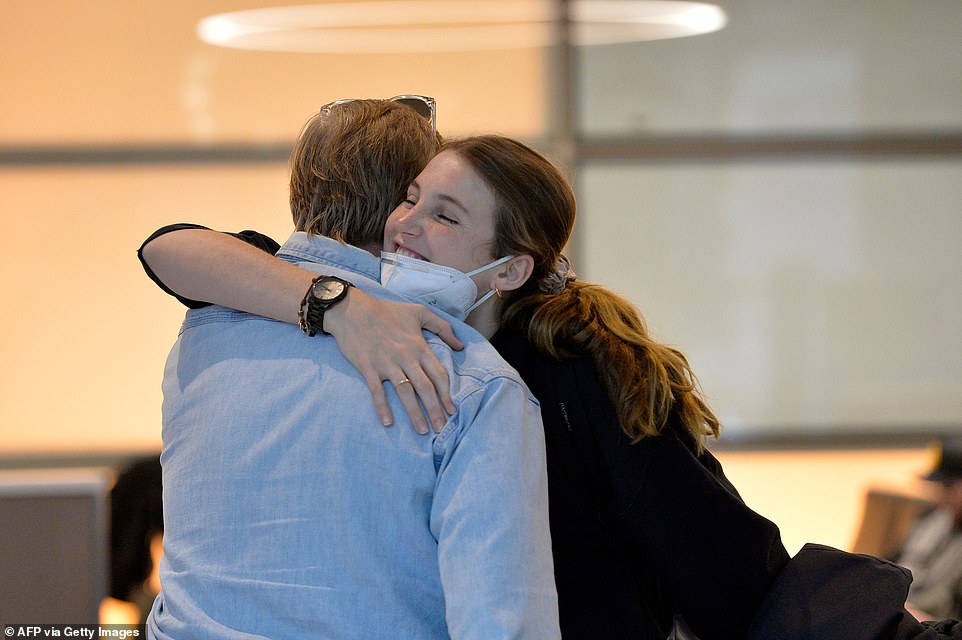 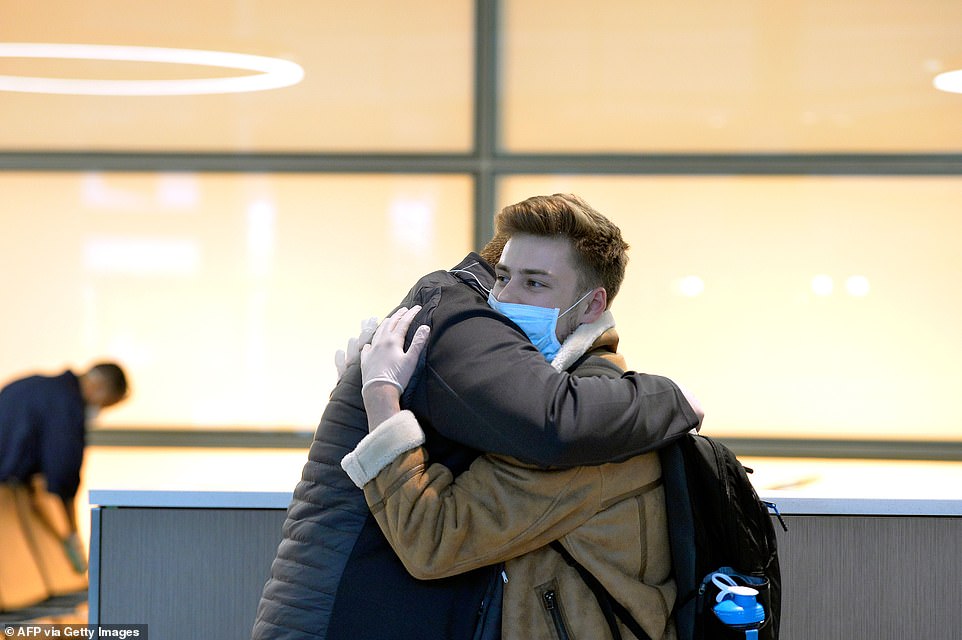 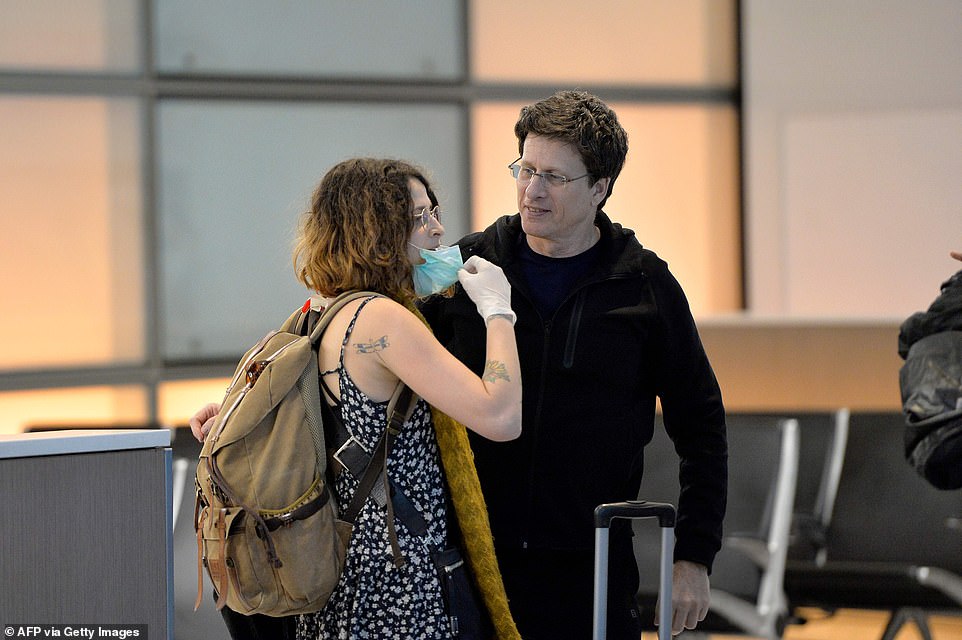 Trump declared a national state of emergency as the World Health Organization named Europe the new epicenter of the coronavirus Friday, with countries sealing borders, shutting schools and canceling events in a frenzied attempt to slow the ballooning pandemic.

He described it as a ‘tragic milestone,’ and warned that it was impossible to say when the virus would peak globally.

The overall death toll jumped to more than 5,000 across the world, including nearly 1,500 in Europe, with total infections topping 140,000 internationally, according to an AFP tally based on official sources.

Italy, Spain as well as Iran – which have emerged as virus hotspots – all clocked a dramatic rise in cases and fatalities in the past 24 hours, while infections were reported in Kenya and Ethiopia, the first in east Africa.

Governments have been pushing through tough restrictions to contain the spread of the disease and unveiling big-bang emergency funding plans to try to limit the economic damage. 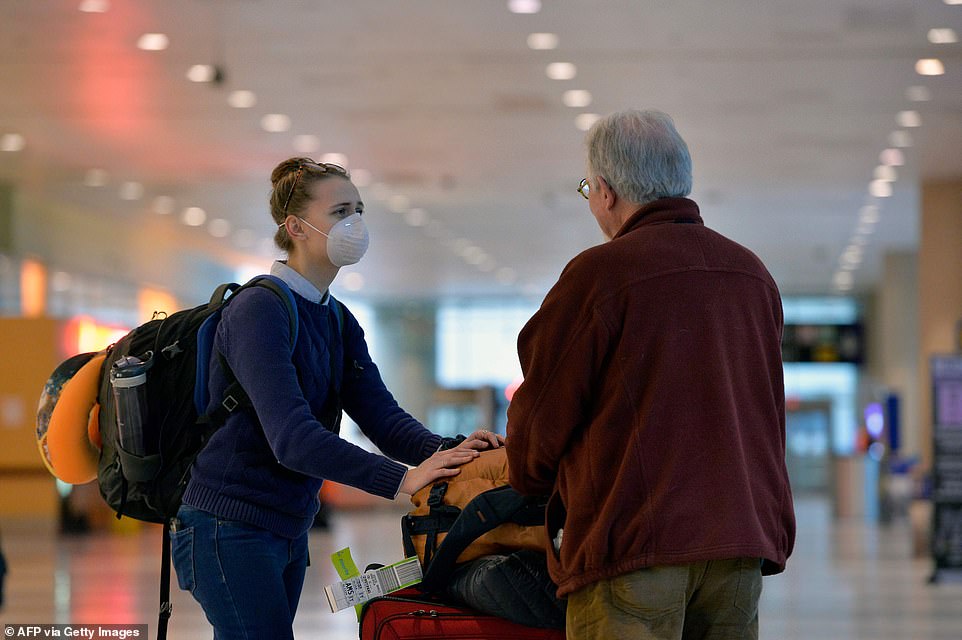 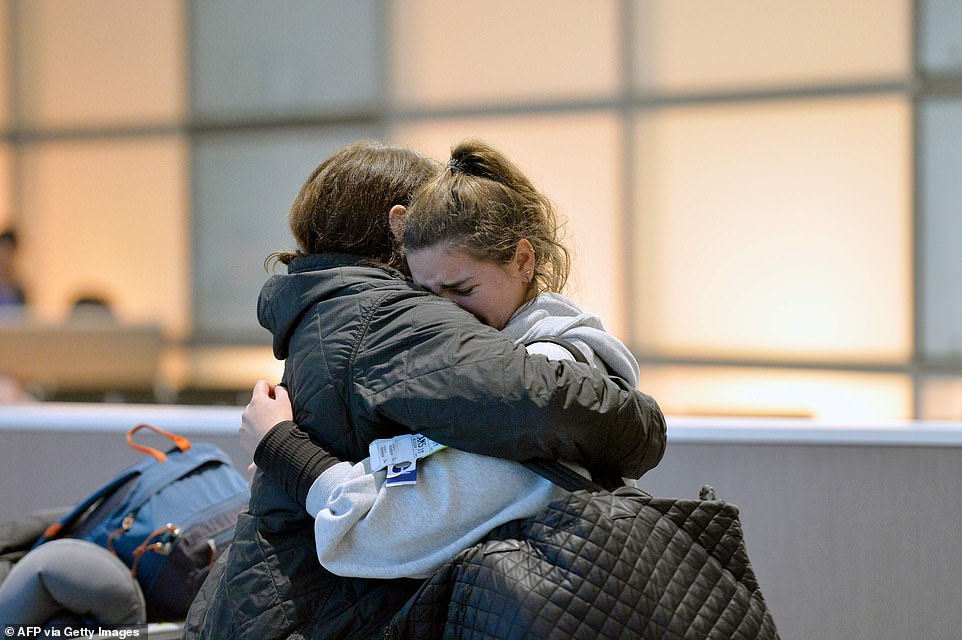 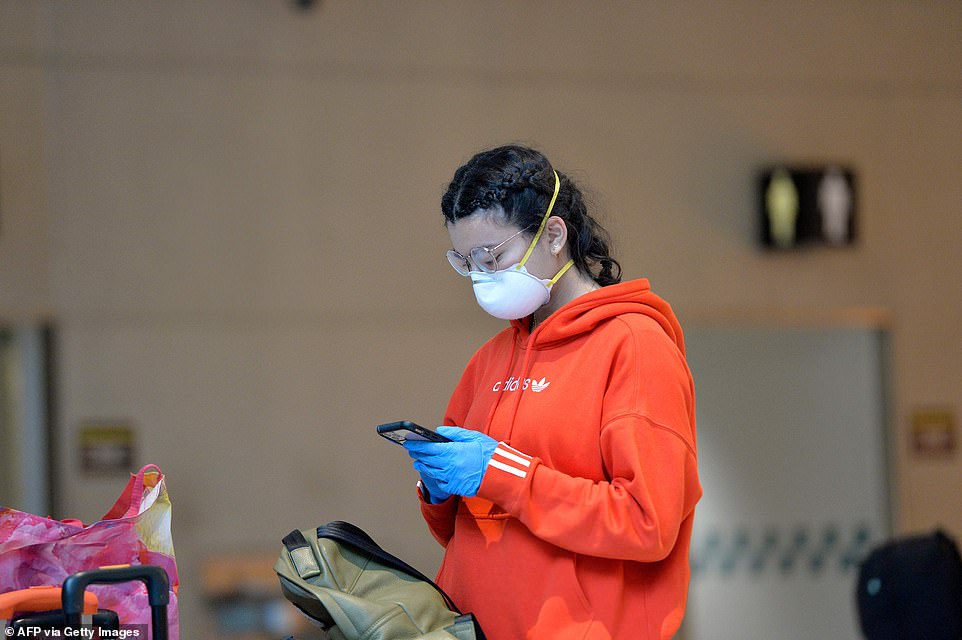 Americans traveling in Europe scrambled to buy last-minute plane tickets, in some cases spending thousands of dollars each, in hopes of speedily returning to the country before President Trump’s travel ban comes into effect.

One family of three paid nearly $8,000 for three one-way tickets from Paris to New York.

‘I feel like they were putting a price tag on people’s safety,’ Coral McNary told ABC News on Friday. 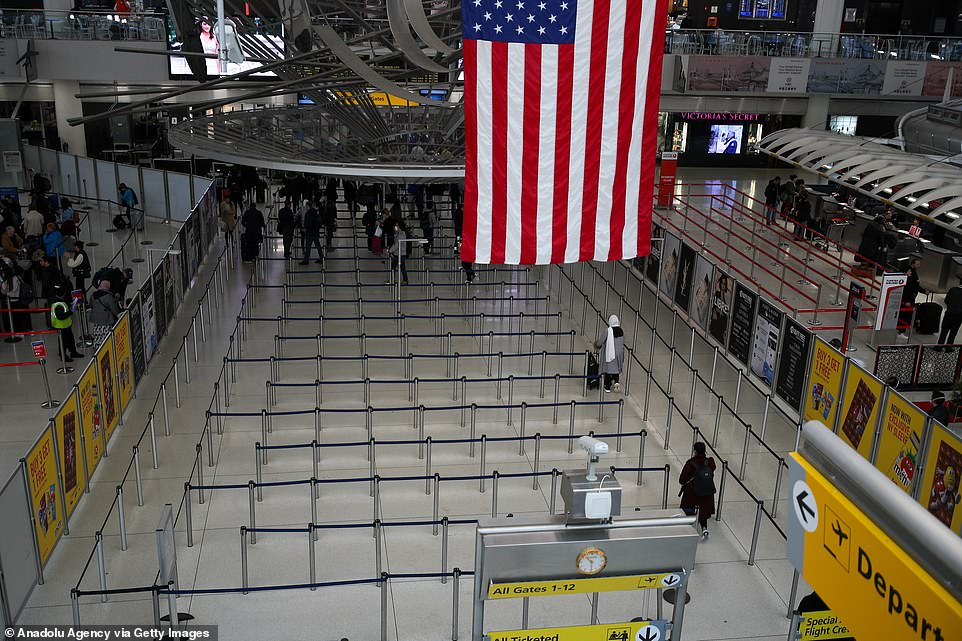 Some of the European airline counters at John F. Kennedy International Airport are seen empty in New York on Friday 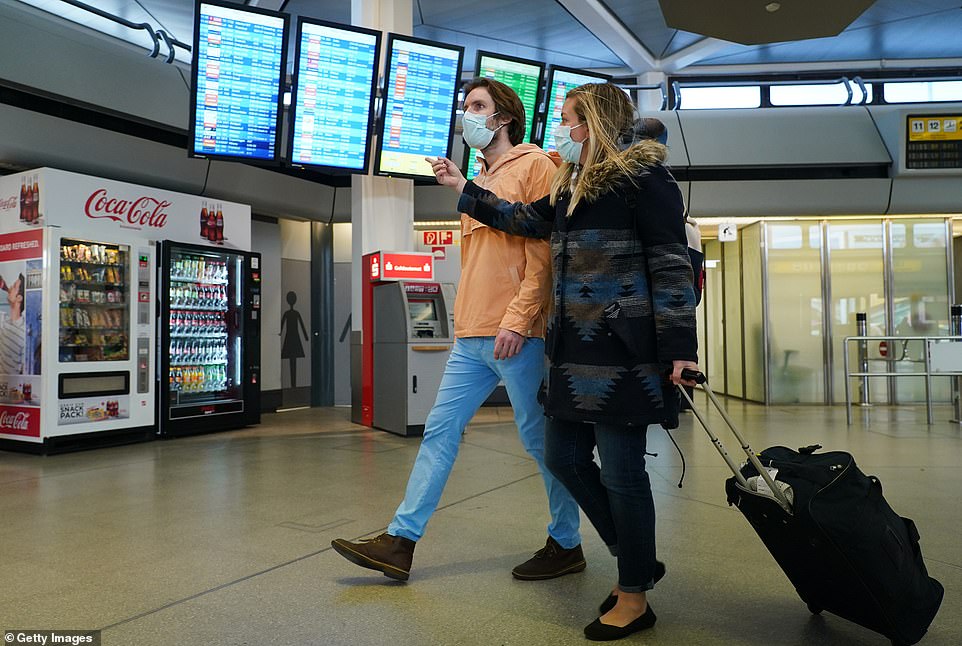 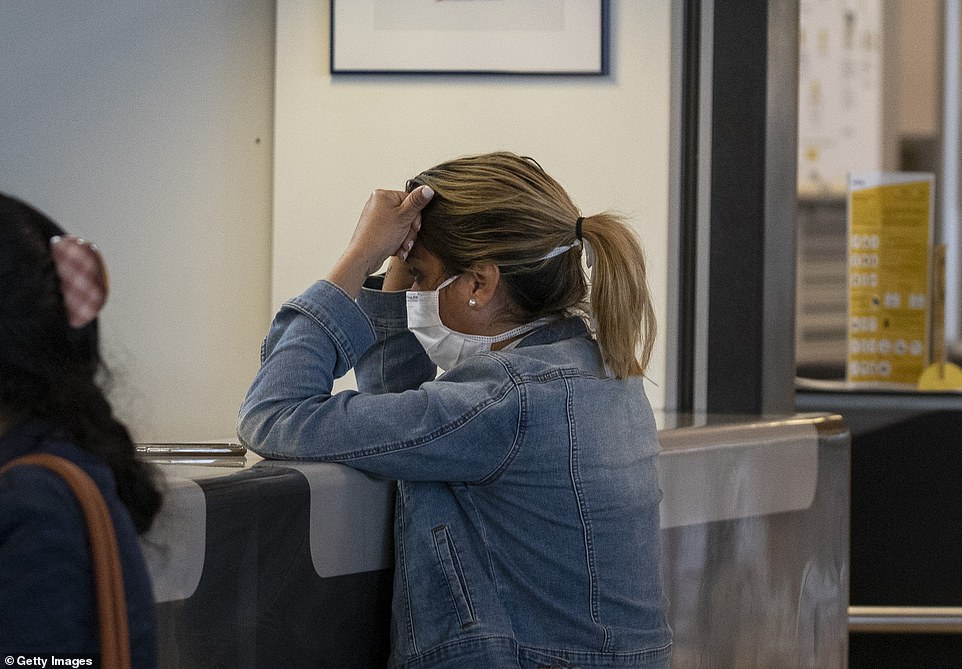 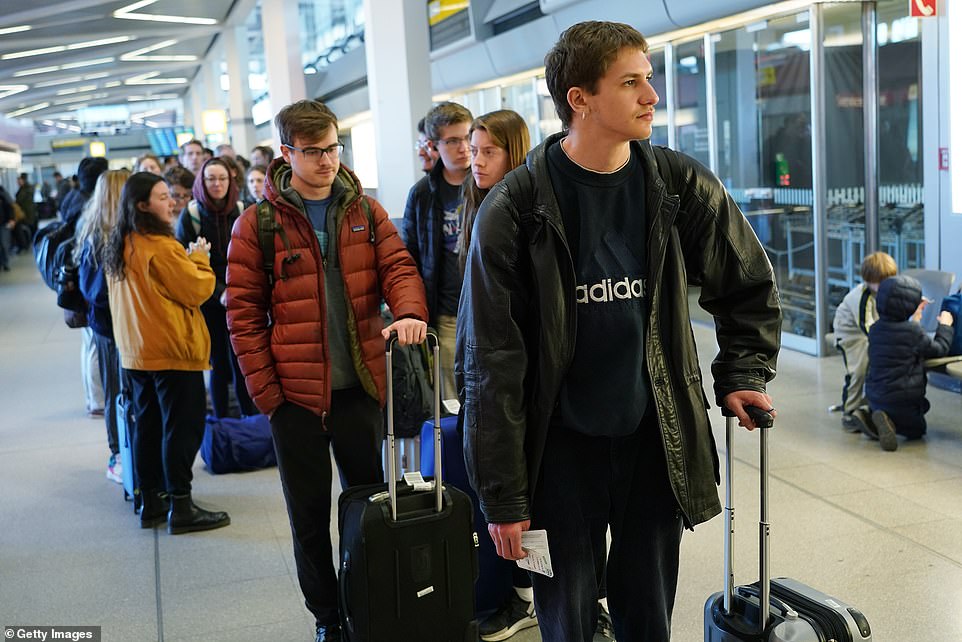 Passengers, including American citizen Dylan Clairmont (right), 20, wait to board the last direct United Airlines flight from Berlin to New York at Tegel Airport on Friday

Jake Genachowski, an American who was traveling in Switzerland, made it back home just in time before the ban kicked in.

He said that when he arrived, there was no screening for coronavirus.

‘Just made it through customs, Genachowski told ABC News shortly after arriving back in the states. 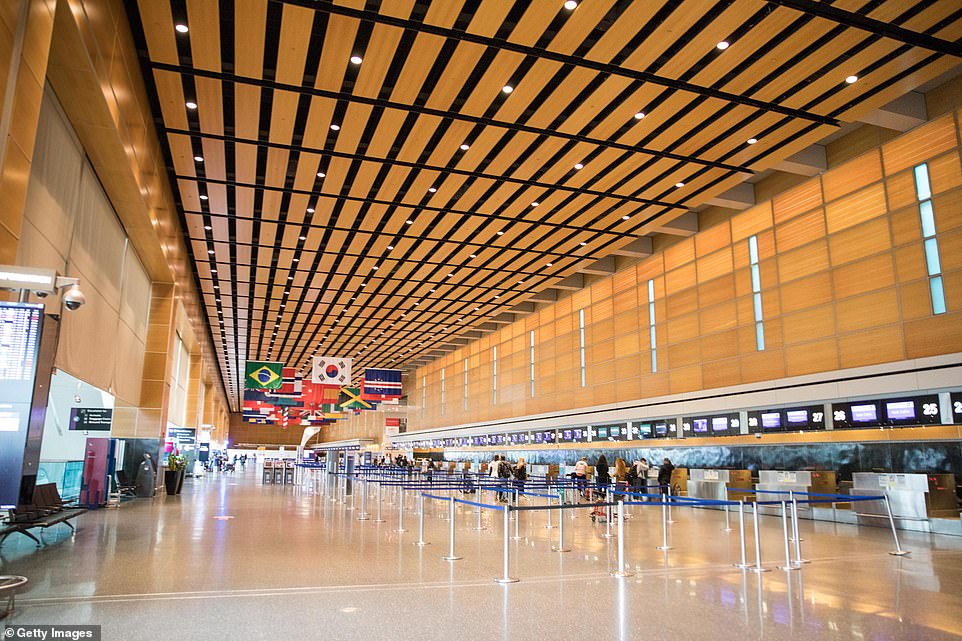 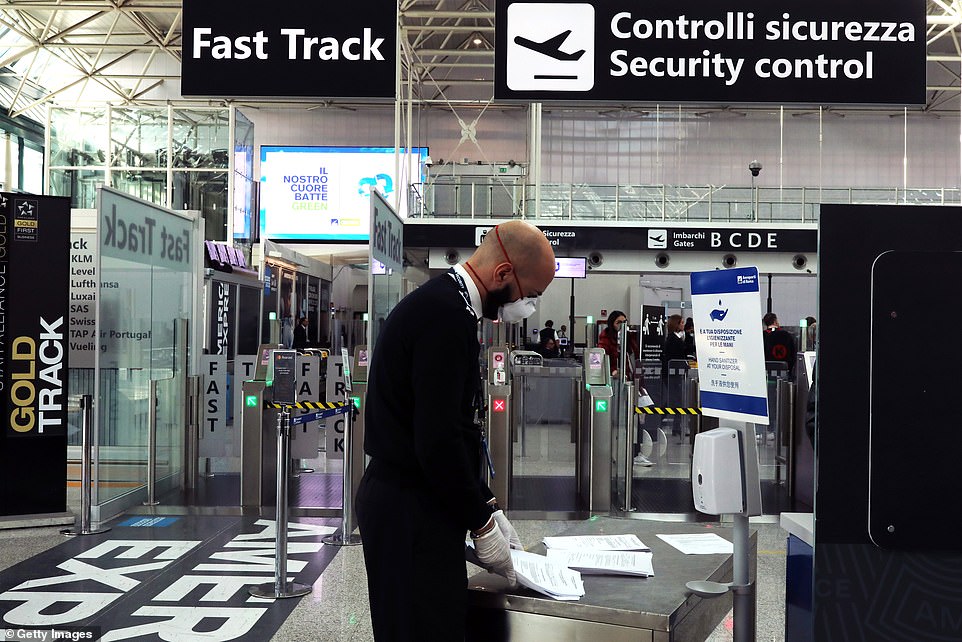 Security at Fiumicino airport in Rome, Italy, checks that passengers have signed the self-declaration that allows them to violate the quarantine and travel on Friday 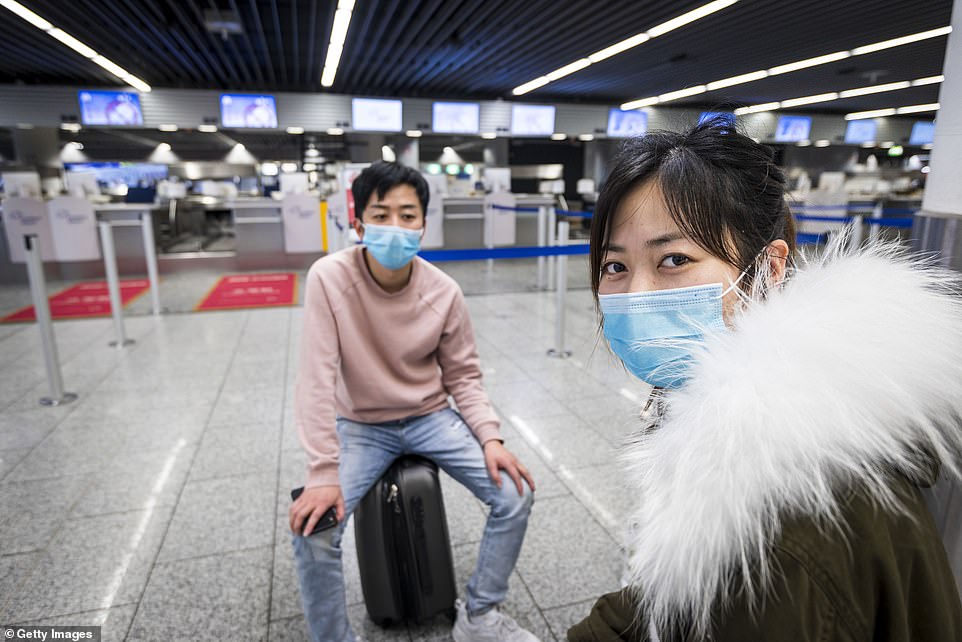 ‘It caused a mass panic,’ said 20-year-old Anna Grace, a US student on her first trip to Europe who changed her booking to fly home from Madrid’s Barajas airport instead of going on to France.

Her friends were less successful in rebooking flights.

Though American citizens are exempt from the travel ban, Grace and many others said they preferred to return home in case the restrictions are expanded or for fear of contracting coronavirus while in Europe.

‘We are nervous that we won’t be able to get back into the country,’ said Atlanta resident Jay Harrison, 29, hoping to board a flight in Brussels. 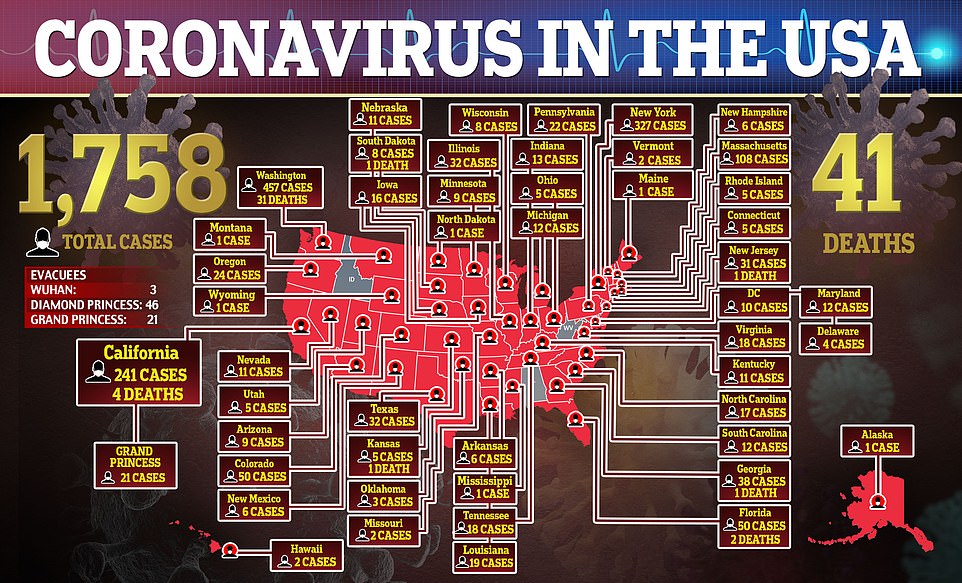 Thus far, there have been 41 reported deaths from coronavirus in the United States 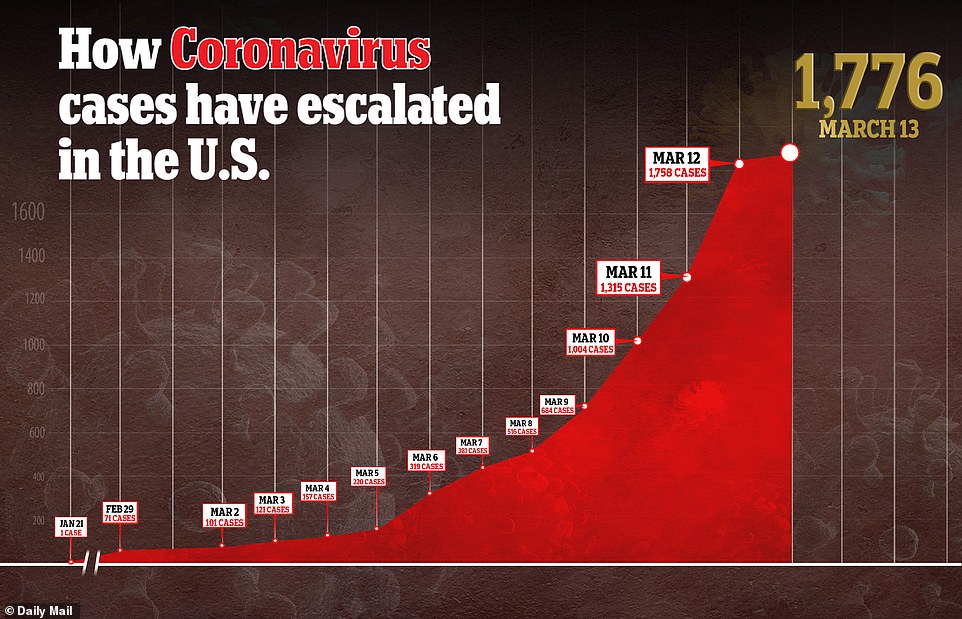 As of Friday, authorities in the US reported 1,776 cases of novel coronavirus

Paola Mesa, 29, a Spanish woman flying from Barcelona to San Francisco, said she backed Trump’s ban on travel from Europe.

‘It’s what Spain should have done before,’ she said.

The death toll from coronavirus in Spain nearly doubled to 84 on Thursday and the number of cases rose to nearly 3,000.

Trump says he had to act as the European Union had failed to take adequate measures to stop the coronavirus.

The EU dismissed his comments and criticized the lack of consultation from the US side. 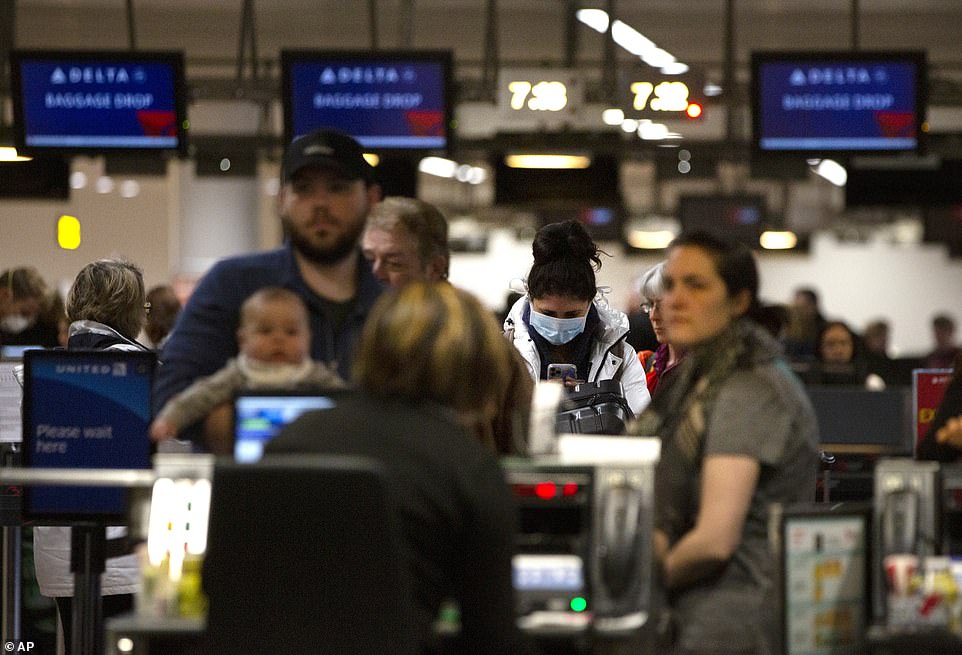 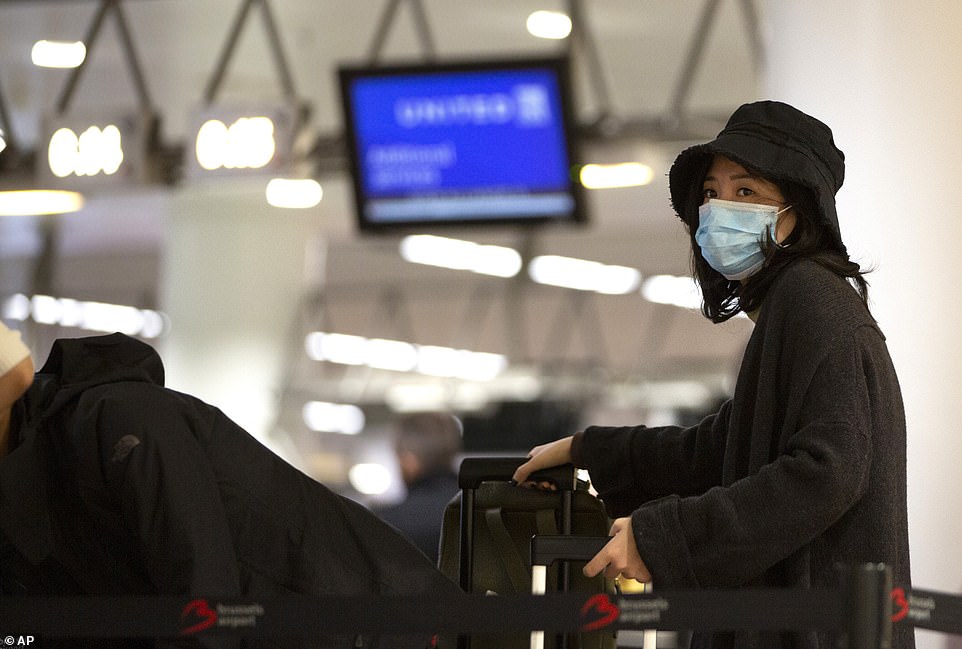 Many travelers, however, were critical of Trump’s decision.

‘It’s ridiculous. Why do we impose a ban now when the virus is already in the United States?’ said Leo Mota, 24, who had just arrived at Paris’s main international airport, Roissy Charles de Gaulle, from Los Angeles.

Miguel Paracuellos, a Spaniard who works in the United States, said Trump was trying to compensate for his failure to expand testing and screening programs at home.

‘He is blaming an external enemy, in this case Europe,’ he said.

Jon Lindfors, an American traveler in Paris, was equally scathing about Trump, who will seek re-election in November.

A Delta crew member, who asked not to be named, said Trump’s travel ban had caught the airline off-guard.

‘It’s going to be a big mess… We were not expecting something like that. We don’t have all the details to know what it means for us and for the company,’ the crew member said.

At Rome’s Fiumicino airport, largely empty due to draconian measures taken by Italy to combat coronavirus, one Italian traveler just back from New York said the United States would soon face the disruption Europe is now experiencing.

‘(In New York)… there were only a few flights canceled or delayed… They don’t understand the situation yet,’ said Giuseppe Riccio, who wore a face mask. 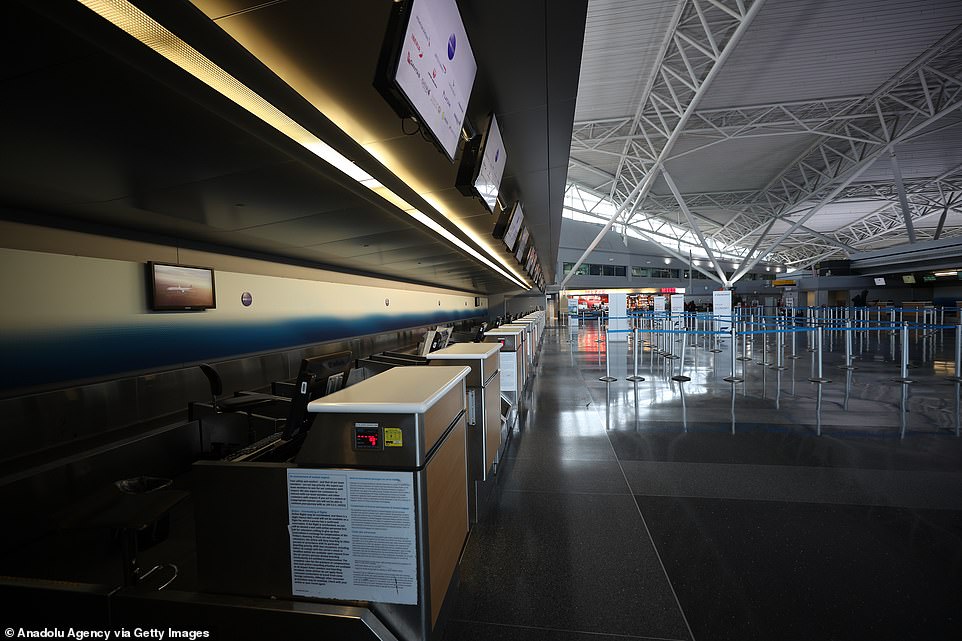 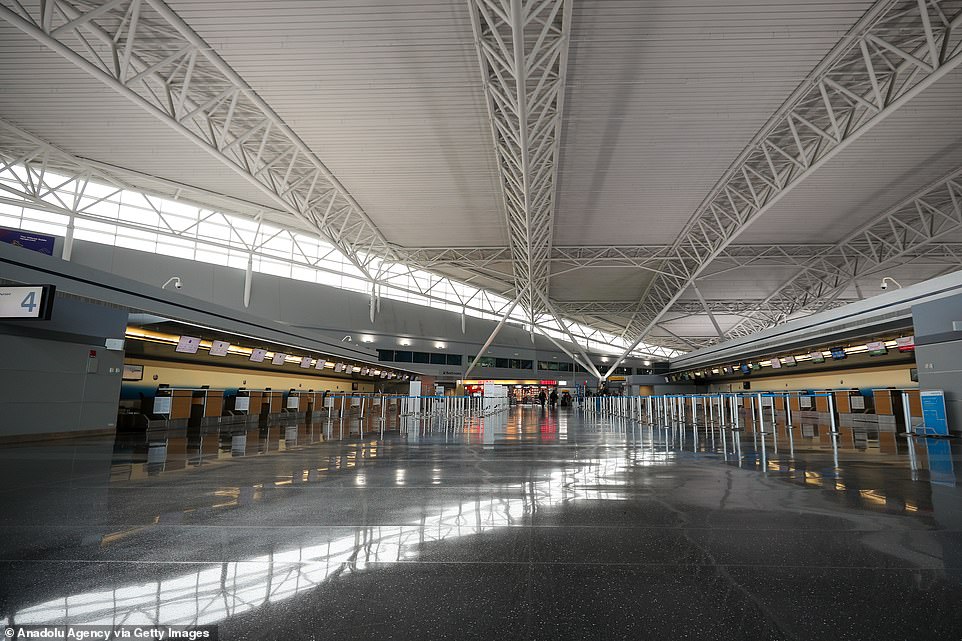 One of the departure terminals at John F. Kennedy International Airport in New York on Friday is seen in the above photo 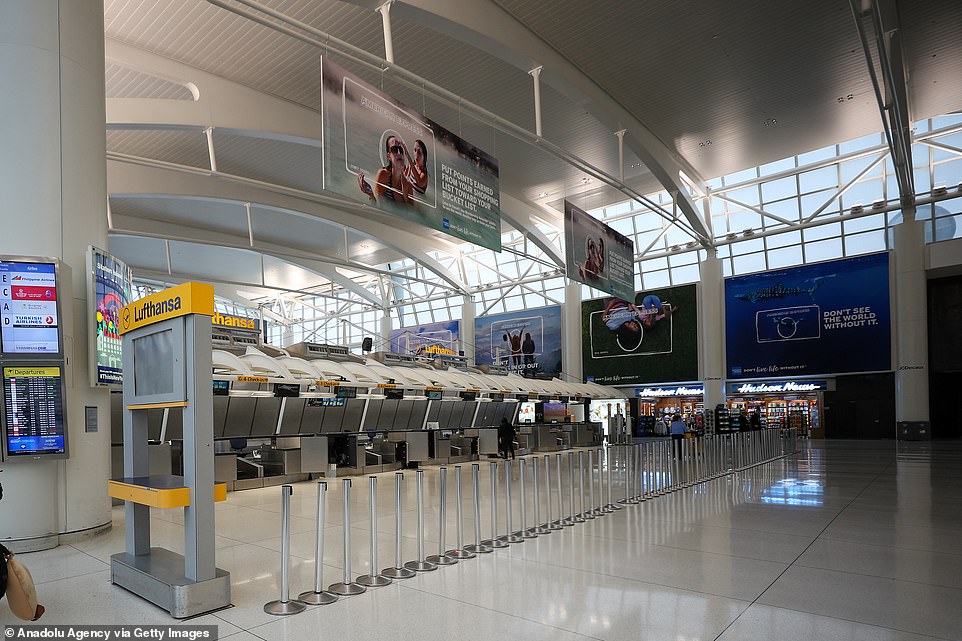 The Lufthansa counter is seen above at John F. Kennedy International Airport on Friday 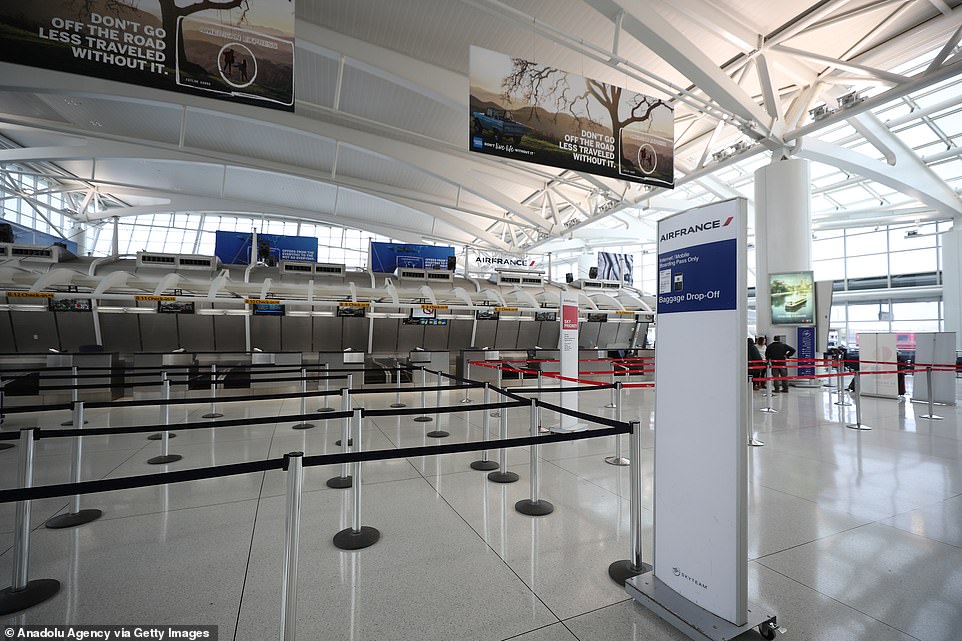 The Air France departure terminal is seen above at John F. Kennedy International Airport on Friday 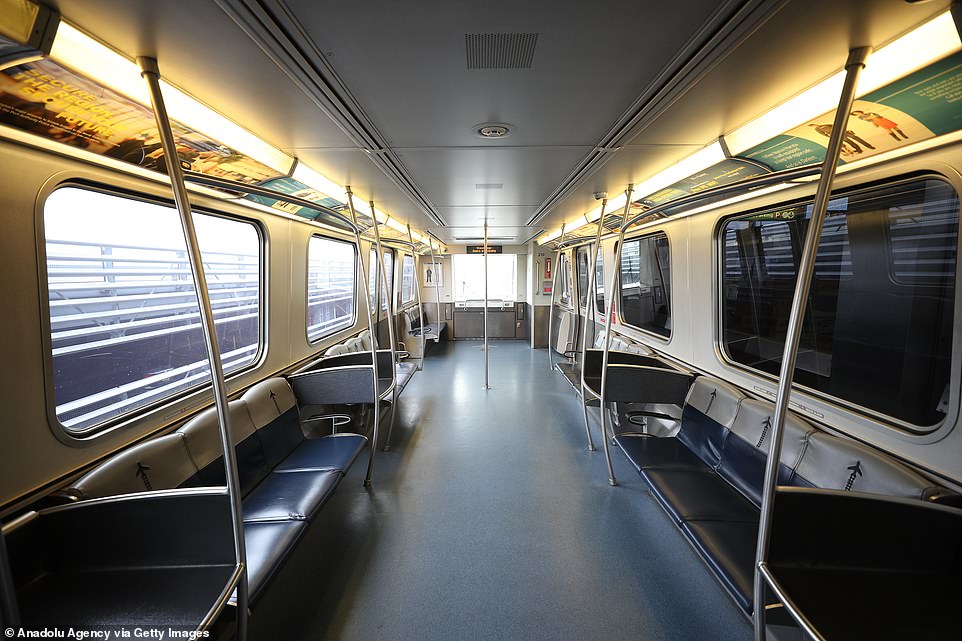 The image above shows the AirTrain, which links John F. Kennedy International Airport to New York City, on Friday

‘There are no controls in place, shops are full of people.’

Gregory and Ada Goldberg, an American couple from San Francisco, were trying to bring forward their flight home from Barcelona but were not getting much help at the airport.

‘This was meant to be two weeks of pleasant vacation but it has become a nightmare,’ said 69-year-old Ada.

Trump on Friday will hold a press conference to address the spiraling coronavirus pandemic as he seeks to calm a panicked nation amid mixed messages and growing criticism of his administration’s scattershot response.

‘I will be having a news conference today at 3:00 P.M., The White House,’ Trump tweeted. ‘Topic: CoronaVirus!’

The news conference comes as the virus edged ever closer to the world´s power centers, including a positive test for a Brazilian official who spent time with Trump and top administration officials last weekend and an Australian Cabinet minister who met with Attorney General William Barr, Trump’s daughter Ivanka, and other top aides.

And it comes as the world has been lurching to try to contain the virus’s spread, with millions of students staying home across three continents, large gatherings canceled and more and more bars, restaurants and offices closed.

Trump and his administration have been under intense criticism amid testing failures and following a Wednesday night address to the nation in which Trump sowed confusion as he announced that the U.S. would be dramatically limiting travel from much of Europe.

Trump, who is rare to admit a mistake, told aides within minutes of finishing the speech that he had made an error when he mistakenly said the newly announced travel ban would include cargo, which it doesn’t.