It was a notable turning point in coverage of the President's now-daily briefings.

Networks had been starting to hear criticism of how much time they have been showing the President answering questions live, reminiscent of a similar debate in the past about showing Trump's campaign rallies. 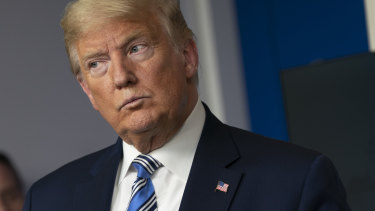 US President Donald Trump listens during a Coronavirus Task Force news conference at the White House on Monday. Networks, with the exemption of Fox, cut short his briefing.Credit:Polaris/Bloomberg

Still, there's a difference between political rallies and a White House discussion of a national emergency.

ABC, CBS and NBC all covered Trump at the beginning of the briefing on Monday, US time, After 20 minutes, they switched to the network evening newscasts, never to return to Trump. The President spoke for nearly two hours.

The cable news networks have given Trump blanket coverage for his briefings, but CNN cut away after about one hour. MSNBC followed within five minutes.

Of its own decision to stop showing Trump live, CNN said that "if the White House wants to ask for time on the network, they should make an official request. Otherwise we will make our own editorial decisions."

MSNBC, through a spokesperson, said that "we cut away because the information no longer appeared to be valuable to the important ongoing discussion around public health."

The network's top star, Rachel Maddow, had said on Friday night that television networks should no longer show Trump live. She cited examples of what she called false or misleading statements the President had made in past briefings, from general suggestions that the government had the virus under control to more specific discussions about drug treatments.

"All of us should stop broadcasting it, honestly," she said. "It's going to cost lives."