EXCLUSIVE: Afghan woman, 27, who worked as a teacher for the British Council is forced into hiding after Taliban fighter demanded she married him or he would ‘destroy’ her family

A terrified Afghan woman who worked for the British Council has been forced into hiding after a Taliban fighter demanded she married him.

The 27 year-old, who is waiting to hear if she will be allowed sanctuary in the UK, said the fighter had given her an ultimatum to marry him or he would ‘destroy’ her family.

Latifa, not her real name, worked as a teacher for the British Council (BC) in Kabul teaching the English language, British values and culture to Afghan women and children. She believes she is a target because of it.

The Taliban fighter knows she worked for what he called the ‘infidels’ having once been a taxi driver who had dropped her off at the offices of the BC.

Her brother has already been brutally beaten at a Taliban checkpoint and warned ‘Khalid (the Taliban fighter) is going to destroy your family unless your sister marries him.’ 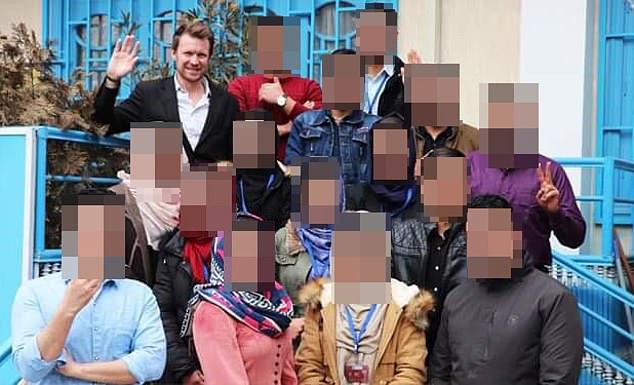 A terrified Afghan woman (centre, in pink) who worked for the British Council teaching the English language, British values and culture to Afghan women has been forced into hiding after a Taliban fighter demanded she married him 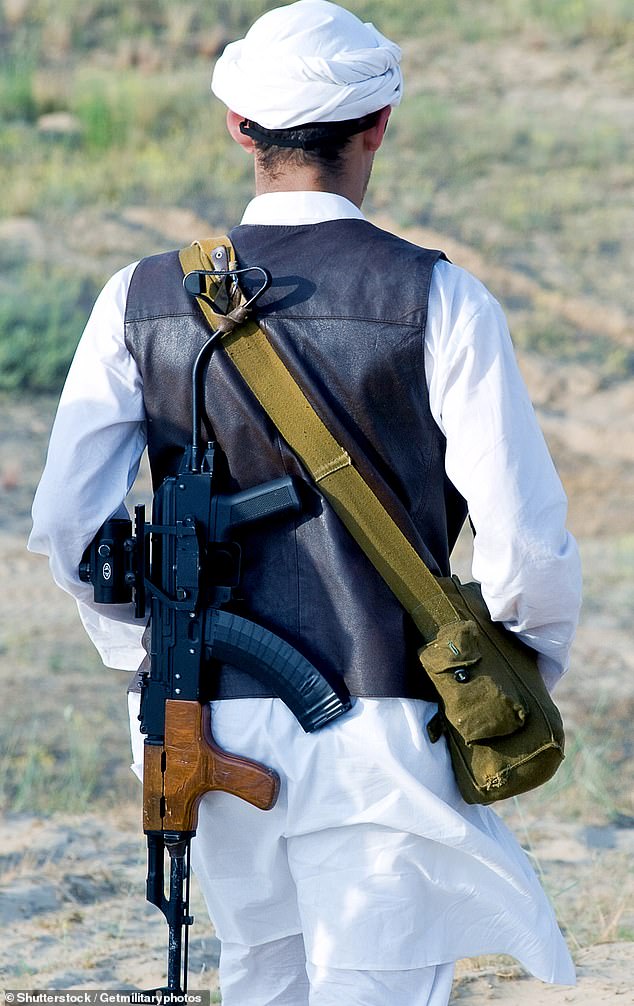 A Taliban fighter threatened to ‘destroy’ Latifa’s family is she did not agree to the demand. File image

Since seizing control aid agencies have highlighted how Taliban fighters have gone to homes demanding women and girls for marriage while others have been forced into giving brides to protect their families and to provide money for food.

Speaking from her hiding place in a Kabul basement, Latifa sobbed as she said: ‘I would rather die than marry this man, I can’t live with a terrorist who is destroying my country and wants to destroy my family. They know that I worked for foreigners and that makes us a target. If they take my family hostage unless I go through with the marriage, what do I do ?

‘I am very frightened and suffering from anxiety, I don’t know what to do. The Taliban came to my house three times and threatened me – they took me into the street and told me I had betrayed them and that I was not allowed to work for non-Muslims.

‘I spent one month in hospital after being run down by a car which I believe was a warning from them that they could find me at any time. Now one of them (Taliban) demands marriage.

‘I worked hard for the BC, I worked from my heart because I believed in them and what they were trying to do but that has made me an enemy of the people now controlling Afghanistan and the only future here is one of fear, punishment and perhaps death.

‘I plead with Britain to show compassion quickly, to recognise the danger caused by our work and to take my hand and lead me to a safe future where I can work, choose my husband and live like a human being. It is in the UK’s gift and each day of delay is a day of extras danger.

‘Those making the decisions should look at their daughters, their wives, their sisters and think “what if it was them ?”’

Latifa claimed that the Taliban fighter had known her family for several years having worked as a taxi driver ferrying her to the BC offices and her mother, a lecturer, to the university.

Those left behind in Afghanistan point out that many of the boys and men they taught over two decades on behalf of the BC are now either Taliban fighters or supporters and know their identities and families.

Latifa is one of around 20 women among 109 former BC teachers and managers anxiously waiting to learn if Britain will grant them sanctuary.

They include a 31 year-old teacher, who worked for three years for the BC. She has moved house eight times in the last year to keep ahead of the Taliban.

Now five months pregnant, she accuses the UK of betrayal having first applied for relocation in June 2021 and said she had been too afraid to go for a scan of her baby because doctors could alert the Taliban.

‘I am in a desperate situation and so very worried, I regret working for the BC because they have left me behind to Britain’s enemy who treats women like animals and I would appeal again to them to help rescue me and my family,’ she said, ‘I have a baby on the way so time is limited and it’s future is in their hands.’

Another woman – described as a ‘poster girl’ for the BC because she was used in a social media campaign that had two million viewers across Afghanistan – is desperate for the UK to ‘save’ women who risked so much for the UK.

Exactly a year ago, they were among BC teachers and managers hoping to escape Kabul on the Operation Pitting RAF evacuation flights having applied for relocation under ARAP, Afghan Relocations and Assistance Policy. 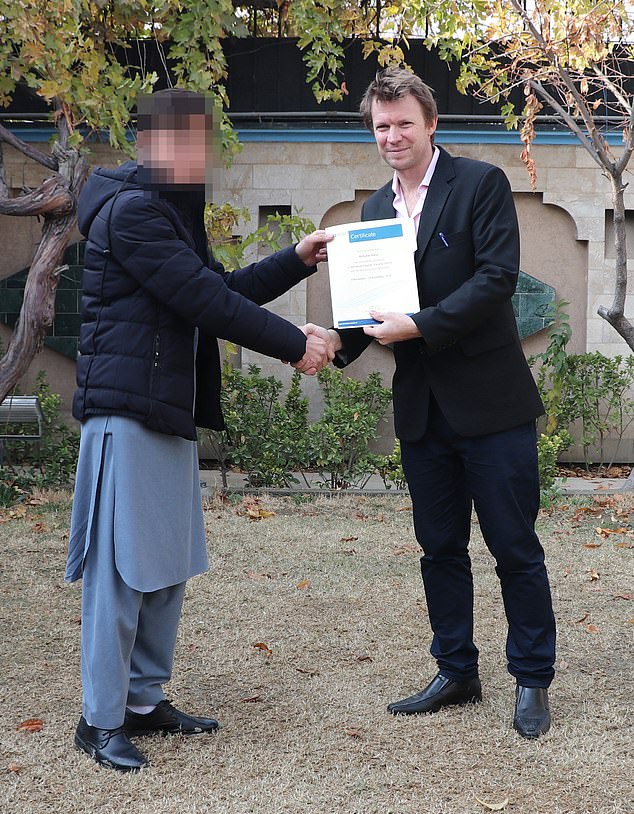 Joe Seaton described the threat facing women after a year in which they have suffered frequent crackdowns, as ‘appalling’. Pictured, Mr Seaton awarding a certificate

While office staff who had been directly employed by the UK were relocated, they were devastated to lean they did not qualify despite being the ‘mouthpiece’ of the BC across the country as they had been employed through contractors.

They have reapplied under the Afghan Citizens Resettlement Scheme (ACRS) and are still waiting more than a year after they claim they were ‘left behind’ by Britain to hear if they will qualify for a new life in the UK.

This Daily Mail’s award-winning Betrayal of the Brave campaign has highlighted the fears of ex-BC teachers who ‘spread the word of Britain across Afghanistan’ and told how they claim to be victims because of it.

One former BC employee was so badly beaten by the Taliban he needed three weeks of hospital treatment, another said his daughter had been whipped by the Taliban because of his work.

Both claimed the Taliban had said the attacks were a result of their work for the ‘infidel.’

The very real dangers facing women who worked for the BC and then left behind were underlined by Joe Seaton, a former Afghanistan manager for the organisation, who has campaigned for their fast-tracked relocation.

He said: ‘While the BC’s education programmes in Afghanistan benefitted women and girls throughout the country, the women who actually delivered all of the training have been left in a dire situation as a direct result of their work with the BC.

‘Latifa, who worked as a Master Trainer on the UK Government funded “English for Afghans” programme is now the recipient of direct threats and demands for marriage from a current Taliban guard. 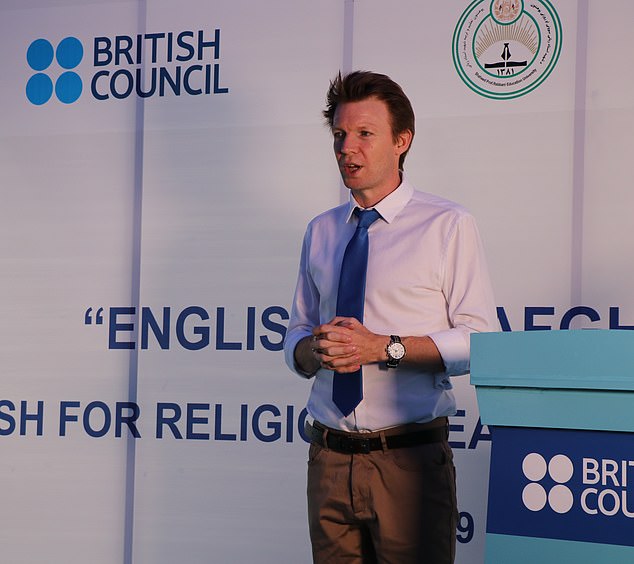 Mr Seaton, a former Afghanistan manager for the British Council, has campaigned for their fast-tracked relocation

‘She has gone further into hiding, changing her location from her previous hiding place, and destroyed her SIM cards in an attempt to get away from someone who believes he can simply demand marriage. He knows who she used to work for and where her family live, and as well as demanding marriage, has threatened her online with the statement “I can destroy you and your family”.

‘This is the sort of statement one usually only hears on TV, but for women in Afghanistan it is very real, and the statement is not an idle threat, but one the aggressor is very able to carry out.’

Mr Seaton, who tweeted a cartoon of a Taliban fighter pointing his Kalashnikov at an Afghan woman with the words ‘Will You Marry Me ?’, described the threat facing women after a year in which they have suffered frequent crackdowns, as ‘appalling.’

He continued: ‘There are many other Afghan women who taught full time on high profile BC programmes across Afghanistan, who are all now living in hiding, and in fear for their lives, because they taught UK values on behalf of the UK government. Everyone within their local communities knows who they used to work for, and many believe they used to be ‘spies’ for the British.

‘Another female BC employee, was a Master Trainer on the culturally sensitive “English for Religious Leaders” programme and also the “English for Civil Servants programme”.

‘These programmes were highly visible, and controversial in terms of who they were targeting. She has been living in hiding since the Taliban took control of Afghanistan. What makes her situation worse was that she contributed extensively to the BC’s social media programme, delivering live training sessions often viewed by audiences in excess of 50K viewers.

‘We actively encouraged our teachers to participate in our social media content and FB and YouTube videos. We had over two million followers on our BC Afghanistan Facebook page. The staff who were willing to contribute to that are now greatly regretting their decision to contribute, and lamenting the fact the BC seems to have forgotten all about them.’

Asked about a recent attack on a member of staff, the BC said it was unable to discuss individual cases but it was pressing officials at the Foreign Commonwealth and Development Office on behalf of former contractors.

Under ACRS it is possible for the FCDO to makes cases such as Latifa a priority. A statement said: ‘We know our former colleagues are living in increasingly desperate circumstances, as the situation in the country continues to deteriorate. We are incredibly concerned for them and for their families’ welfare and well-being and we continue to be in direct touch with them on a regular basis.

‘The Afghanistan relocation schemes are run by the UK Government. We have been pushing for progress with senior contacts within the UK government to ensure the earliest consideration of our former contractors’ relocation applications.

‘We place the highest value on those who worked with us throughout the last 20 years in Afghanistan and are extremely grateful for their valuable contribution to the UK’s engagement with Afghanistan. The commitment and dedication of our colleagues is never forgotten, and we continue to work tirelessly on their behalf to press for a speedy resolution.’