Home » World News » Aboriginal lives ought to matter not only when we die, but while we are alive

To address Aboriginal deaths in custody, we need to look beyond the past three decades since the royal commission into this national disgrace and examine how colonisation perpetrated genocide against First Nations people on this soil. The ongoing indifference towards Aboriginal lives has resulted in an estimated 470 further Aboriginal deaths in custody – and not one conviction of those responsible – since the royal commission handed down its damning findings, 30 years ago to this day. 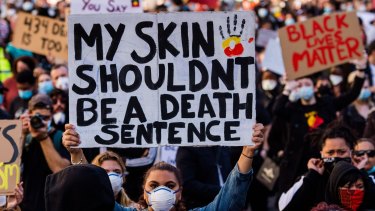 There is no escaping the link between our colonial past and the persisting high levels of Indigenous incarceration.Credit:James Brickwood

The systemic erasure of Aboriginal lives, languages and law from our own land is the product of a society founded on genocide. Killing Aboriginal people has always been a byproduct of the colonial project; it started with massacres, it persisted with the missionaries, and the remnants of this violent past are manifest in the mass incarceration of Indigenous peoples.

We are the most incarcerated people on the planet.

If we are honest about Australia’s treatment of Aboriginal people, we should call it for what it is – genocide. The United Nations’ definition of genocide includes acts committed with intent to destroy – “in whole or in part” – a national, ethnical, racial or religious group. Such acts include killing members of the group, causing them serious bodily or mental harm, imposing measures intended to prevent births within the group, and forcibly transferring its children to another group.

It’s a hard truth to swallow, but a necessary fact to accept if this nation is serious about reconciling our past and building a better future based on truth and justice. This week the NSW Coroner Teresa O’Sullivan rightly said the over-representation of Indigenous people in prisons could not be separated from our colonial history.

To heal old wounds, we need to confront some hard truths. Colonisation is a not process that suddenly stopped because of a royal commission, “sorry” speeches, or promises to close the gap. Australia is a nation fixated on incarcerating Indigenous people. It started as a prison colony and continues to be an incarceration nation.

For instance, since the royal commission into Aboriginal Deaths in Custody, the incarceration of First Nations women has increased by 148 per cent. This is what systemic racism looks like.

But we go on building more jails that will disproportionately incarcerate First Nations people. In NSW alone, in the past five years, $3.8 billion has been spent on building prisons. And yet a proposal to establish the Walama Court in NSW, a culturally safe model designed to divert Aboriginal defendants from the criminal process and spare the state costs, has been repeatedly dismissed by the NSW government.

Aboriginal communities are suffocating in bureaucratic red tape while governments are infatuated with tough-on-crime rhetoric. The wilful failure to act on the royal commission’s recommendations amounts to a modern-day genocide.

Recommendation 339 called upon “all political leaders and their parties to recognise that reconciliation between the Aboriginal and non-Aboriginal communities in Australia must be achieved if the community division, discord and injustice to Aboriginal people are to be avoided”. A key feature, it found, was to implement the right to self-determination of Indigenous Australians.

At last First Nations people have spoken about how this unfinished business might be put right. It is underpinned by the idea to enshrine a First Nations Voice in the Australian Constitution. A guarantee that First Nations voices would be heard every day in our national life, beyond the volatility of political cycles. A First Nations Voice that enables self-determination, treaties and truth-telling in recognition that sovereignty was never ceded to these lands and waters.

First Nations people should not have to protest for the simple right to be heard when a loved one dies in custody. The National Aboriginal and Torres Strait Islander Legal Service issued a public statement on behalf of the families of victims, including 10 demands for change such as a moratorium on building more prisons, decarceration strategies, amending bail laws and repealing mandatory minimum sentences. It also called on Prime Minister Scott Morrison to meet the families, a request that is yet to be honoured.

The lack of political action and accountability since the royal commission means the next generation of First Nations young people are inheriting the trauma and the struggle of living in a society where their lives do not matter.

No politician is going to save us, but people power continues to prove we are on the right path.

The latest polling reveals a majority of Australians believe First Nations Voices do matter. We need to remain clear-sighted and hard-headed about this moment in time; we are on the cusp of transformative change and we must not let politicians diminish our hopes for a better future, based on truth and justice.

Aboriginal lives ought to matter not only when we die, but when we are alive.

Teela Reid is a Wiradjuri and Wailwan woman and a lawyer.