Last year PBS gave audiences the charming Victorian-era mystery series “Miss Scarlet and the Duke.” Though akin to other PBS and BBC shows like “Ripper Street,” creator Rachael New’s mystery series feels so charming “because Being Feminist (capitalization intended) isn’t what it sets its focus on.” Season 1 concluded with Eliza Scarlet (Kate Phillips) and William “the Duke” Wellington (Stuart Martin) possibly embarking on a romance — which, for a television show, can be a blessing or a curse.

The two certainly had a flirtatious bond, but a relationship could affect Eliza’s desire for a career, given William’s disdain for Eliza’s work. And in the second season premiere, which aired Sunday on PBS, it seemed like the pair were together. Then abruptly, William and Eliza realize a relationship isn’t in the cards for them and break up.

The direction is certainly an interesting, if frustrating, move for the first episode of a new season. The dinner in the Season 1 finale, while not wholly indicative of an outright dating plot, indicated a desire to test the waters of a relationship. Considering how quickly television shows have to stake their claim, it’s possible that alluding to a romantic pairing between the two could have been a solid conclusion had the show just ended there.

But it didn’t (thank goodness), so the moment requires a bit of a tweak to definitively conclude any pretense of an overt relationship while still providing a will-they-or-won’t-they narrative to propel future seasons forward. It’s a retcon that makes sense. Romantic tension is the heart of a strong TV couple, but for all the desire to see them get together, it doesn’t always work. 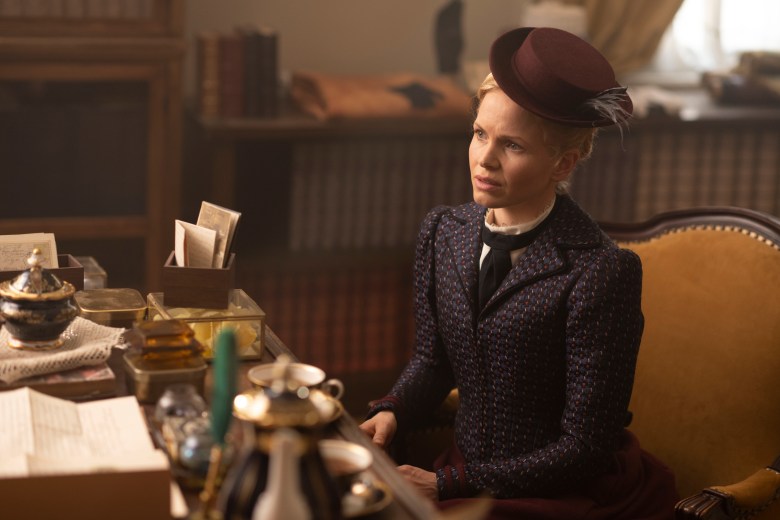 “Miss Scarlet and The Duke”

Bringing two characters together is a tricky needle to thread, and one that has made TV writers nervous since David and Maddie finally got together on “Moonlighting” after seasons of crackling sexual chemistry. Ratings dropped precipitously shortly afterward, and thus was born the myth that concluding a will-they-won’t-they romance meant kissing your show goodbye. And while Jim and Pam (John Krasinski and Jenna Fischer) would stay together throughout the life of “The Office,” the domestic issues they faced felt of a piece with the professional world in which the characters lived.

You can’t turn Eliza Scarlet and William Wellington into a Jim and Pam, most critically because of the era in which they’re living. Their relationship isn’t strictly will-they-or-won’t-they. In Eliza’s eyes, to be with William is to submit herself to a life of domesticity. Season 1 found William begrudgingly admitting that detective work is Eliza’s calling, but he can’t completely change who he is and the era in which they live. Their relationship is a question of who will submit to whom first. If Eliza submits, the very premise of the show changes.

This might explain why Season 2 sees William receive more criticism from a new Scotland Yard superior and is placed in charge of a new protégé, Oliver Fitzroy (Evan McCabe), who William believes isn’t cut out to be a detective. As Season 1 showed, William has more power than Eliza — as a Scotland Yard detective and a man — but has difficulty finding his humanity and placing him opposite a detective he perceives as lacking the typical characteristics of a Scotland Yard detective forces William to confront his view of himself and his profession. It might just be enough to allow him a glimpse of a world where he and Eliza can be together while she works alongside him.

Season 2 of “Miss Scarlet and the Duke” might feel like a step backward for Eliza and William’s relationship, but to separate Eliza and William is to help them develop as characters. The will-they-or-won’t-they formula can see a significant shake-up if their relationship develops in a way that changes how William, as a character, sees women. It’s a mystery fans should be eager to see unfold.

“Miss Scarlet and the Duke” airs Sundays on PBS.